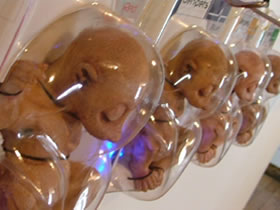 As I had the impression that for too long both the scientists for Mind and the researchers for Artificial Intelligence had taken for reference completely inadequate concepts, at the beginning of the year I developed the concept of Polymorphic Intelligence. This theory has little by little gained importance, being requested and welcomed all around the world.

This is an attempt to explain, in a simple theory, the so called human-machine relation, trying to answer to the several tricky theories and philosophies concerning the different fields regarding the mind. My attempt is to free from any kind of ambiguity our thought, to give a straight and simple definition of mind and intelligence. My definition wants to wipe out the prejudice according to which constructive intelligence- and symmetrically the destructive one- is a exclusive prerogative for human beings or beings in general. On the contrary I want to prove that also a machine can create and have a real collaborative and competitive power. Anyway, according to me, they are able to be inspirers and inventors of useful ideas for our world and our future existences.

In other words with the application of electronics and digital also machines do play  and it should be acknowledge d- a pivotal role. In fact, with their creativity and intelligence they are co-interpreters of reality. My starting point is that robotics and AI, as well as literature, art and psychology have inherited some common and ancient paradigms, ideas and approaches. These paradigms make the interpretation of the human being-machine interaction be established on a kind of mutual alienation and so this cuts the inverse and growing need for a definition of an integrated human being-machine relationship.

Unfortunately for us, these ideas come from so popular texts that the thoughts written there seem to have irreparably ruined the whole philosophical, artistic and scientific heritage of the last century.

Probably the most influential and ‘dangerous’ theories are those reported in Alan Turing and Isaac Asimov’s novels, where the philosophical approach is an absolute distance between human being and machine. Their notion of machine (and the consequent machine-intelligence ) is based on the principle of external and isolated object from the human entity. The relation with machines is then essentially extrinsic, both physically and mentally.

Well, I think that these are the first concepts we should get rid of if you want to consider intelligent machines in a modern way. For centuries human beings and machines have been sharing the same spaces, both physical and geographic, mental and virtual. In other words machines are the complementary part of our Ego or, at worst, part of our world and our everyday life.

The solution for alienation towards modern machines seems to be only one: that is the one proposed by Eastern, Indian and American Indian cultures. Most recently it has come across the Western cultures through Jean Piaget and other theorists’, such as G. Bateson e J. Gibson, thoughts and studies. All these theories constituting the basis for ‘Ecological Psychology’ or ‘Environmental Psychology’ start from the idea that the whole universe takes part in the activities of our ‘computational mind’. And this represents a real intellective and complementary potential for our nervous system.

Now, if this is true, the people engaged in A.I. and Robotics have to inherit the principle of Bateson. This principle sounds as ‘ the walking stick is part of the blind man, a mental extension of his peripheral nervous system, of the associative areas of his brain and mind’. So the scientists have to agree with the idea that all artificial objects can be a complementary part of our elaboration skills, beside the perception and action ability. By the way, this is manifest, also thanks to the high sophistication and spreading of digital information systems.

In fact, there’s a distinction to do: our modern psycho-technologies are different from the traditional one  for instance bike (motor system) and telescope (sensorial system)  and tuning with Mr. De Kerckhove, they include radio, TV (connectivity) and above all PC and web (interconnectivity). Otherwise, it is to point out that many kind of automation are widespread rather than integrative. Moreover they represent functions integrating and substituting complex human knowledge processes such, for instance, creativity and problem-solving.

Although this process is clear and evident, many people do have problems in understanding this in progress changes. So, we can see and easily accept the changes in our mobile phone contact list, changes regarding the features and use of short and long-term memories. On the contrary it is difficult for us to become conscious that the notorious ‘copy&paste’, ‘undo’ e ‘T9text input’ have changed our everyday writing and, as a consequence, thinking and communicating. On this subject I’ve developed a reference model called The Darwinian Composer , but I’ll tell you about a next time. In short, the symbol system we are inheriting from electronic culture is affecting our minds and I do think that it will probably start a real revolution of the whole human semiotic system.

Elements such as hypertext, global researches, digital and satellite maps, GPS, wearable computers, independent robots and so on are no more than an increasing number of functions enriching the biological brain and a parallel devolving of abilities to machines. In other words these machines are on one hand a proof of the restructuring level reached by human brain, while on the other hand they represent the growing ‘relying’ of human intelligence on machines.

So I believe I can affirm that intelligence has developed its evolution speed and widely enlarged its action field. So there’s an other by-product: beyond the traditional biological and evolution factors, intelligence is also developing its own definition. This is due to both power of the new technologies in improving our and their own perception and the influence of the intelligent machines on mind. As a matter of fact, as G. Rizzolati pointed out after the discover of Mirror Neurons, human beings learn a lot by imitating. Consequently, if on one hand we let machines copy biological intelligence, on the other hand we can’t help imitating some of their behaviours and then starting a continuous repeating process where teaching and learning happen at the same time.

All this is directly bringing us towards the first kinds of hybrid intelligence while, as it was not sufficient, intelligence itself is developing in a new dimension. This is due to some software technologies such as neural nets and evolution algorithms creating independent intelligence, thought and cognition forms.

Now, it is very easy to foresee what was enounced by Alexander Chislenko, that ‘the skill of future machine of sharing experience, knowledge will cause an evolution in intelligence from a relatively isolated to highly connected function’ and that ‘the continuous evolution of networks for mobile and stable instruments can be seen as a natural prosecution of the biological and technological process for a community of structures intentionally conceived for a global interconnection’. Yet, it is more difficult to get that it is our own brain that is not alien to all this, but on the contrary is utterly influenced by operating A.I.

All this is part of what I call Polymorphic Intelligence.