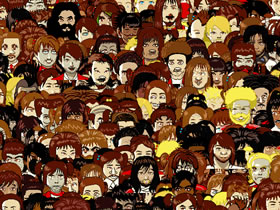 Animated GIF ( Graphics Interchange Format ) are the emblem of a vintage aesthetic applied to the net. A retro and nostalgic aesthetic, built with natural forms, a poor palette, the pixel grid in view. One of the first format to allow the insertion of animated elements inside web pages, in use since the dawning of the Internet.

It has never truly disappeared, even if outclassed by more advanced format such as Flash, most of all talking about the banner. The GIF is now protagonist of a recovery and revaluation movement. Movement that includes a huge complex of forms and format considered obsolete, such as frames, three-dimensional fonts, midi files, buttons and the austere aspect of home pages 1994 style . That amateur vocabulary, far from the contemporary web design, that the Russian artist Olia Lialina has effectively defined ” grubby “.

Today an exhibition, simply intituled The Gif Show (from 3 rd May to 3 rd June at Rx Gallery of San Francisco) celebrate the return of animated GIF. They are proposed as creative platform, thanks to their lightness, their “open source” characteristic, both on the technical and conceptual side (there’s no need of owner software, broad band, particular technical abilities). A page of Myspace , the popular US social networking service, presents the event, that impress for its hyper-kinetic aspect, introducing the spectator into the exhibition mood.

A group of 12 artists investigates on this graphic format through simple GIFs, but also videos, animations, prints and sculptures. It’s lead by Marisa S. Olson , artist herself more than editor and editor of Rhizome.org. Interpreting with an ironic manner all the low-tech charm of the GIF graphic language, described by Tom Moody, one of the participant, that writes on his blog: “GIFs have a special charm, minimal as the garage rock”.

So here’s the clouds on a light blue background by Cory Arcangel in a mod from the historical Supermario. A dancing Olia Lialina in Animated Gif Model . The patchwork sculptures by Loveid . The fictitious pop-rainbow by Paperrad . The crowd of little animated human being who runs in loop in Marathon by Guthrie Lonergan . The break-up of the rock icons from glitch by Matt Smear . And Abe Linkoln, Peter Baldes, Michael Bell-Smith, Jimpunk and Paul Slocum . The show will end with the musical performance of the Eats Tapes, US duo that mix acid house, techno and electro with the visuals of Nate Boyce, investigator of the alterations of the perception.

Flashing and colourful, these rough kinematical images express a punk and kitsch aesthetic that re-affirm the potential of the digital craftsmanship, without proclamations but rather with the energy of creativity.