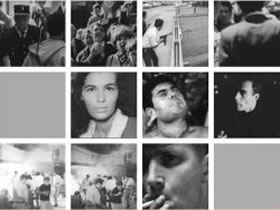 According to Jay D. Bolter and Richard Grusin, new media absorb and emulate old media. They call this phenomenon remediation and it can be seen both as the direct expression and invisibility of medium and hyper-mediation or display of medium and its characteristics.

One of the most interesting characteristics of this process is it’s multidirectional action. As a matter of fact new media give us the possibility to discover some characteristics of old media we forgot because of their linear evolution and so they give their contribution to their growth. So “soft cinema” experiments and “database logic” (Lev Manovich) gave us the possibility to recollect that “all films are computational, all films are a kind of net art” because they are based on an enormous archive of elements and the final product – the film – only represents one of countless possible combinations. Daniel Coffeen states it in his introductory essay to The Battle of Algiers , by Marc Lafia and Fang-Yu Lin , the central panel of the triptych commissioned by the Whitney Museum of New York with the Tate Modern of London in the occasion of Node.London.

As the title reveals the project is above all an outstanding case of remediation, the starting material was actually taken from The Battle of Algiers (1965) , the historical film by Gillo Pontecorvo that – three years after the liberation war of Algeria from the French colonists – tried to reconstruct this in a sense atypical battle Algerians won as a result of the scattered and “cellular” structure of its army in spite of the static nature and predictability of the French army.

The uniqueness of the Pontecorvo’s movie is the structure miming the scheme of the battle at the same time refusing the stereotypes of this genre and reducing the complexity of the dynamics or power to an history. The starting database refuses a linear structure, the telling is fragmentary and it follows multiple directions interlacing to form a complex grid.

This explains the Lafia and Lin’s choice. They found in the Pontecorvo’s movie some potentialities the following cinema forgot and digital media are now re-proposing with a new energy. As a matter of fact The Battle of Algiers adopts a net-like structure where the segments related to the two parts (the French army and the Algerian one) set and move according to different dynamics, which are unpredictable, confuse, and very rapid in the case of the Algerian army, which abruptly emerges to suddenly disappear in the background.

Apart from these generic characteristics, every “cell” has an autonomous behaviour, which is strictly determined by its role in the whole history. Following Potecorvo’s suggestion, the development of this story is completely transferred from the content to the structure, from what a sequence of photogram tells to how this sequence behaves in relation to the other sequences.

The audience can partly direct this complex bundle of events by means of a control panel to zoom a specific area of the grid or to wipe out the screen to reconstruct the grid. But at some point you forcedly lose control on its behaviour because you are distracted by the fragments of the story winding up under your eyes, which actually direct the show.

The drama doesn’t disappear, it is transferred: if you look for it in the development of the story, or in single scenes you’ll get disappointed because almost all drama is in the behaviour of the interface, in the rhythmic pulsing of the fluxes of energy crossing it.