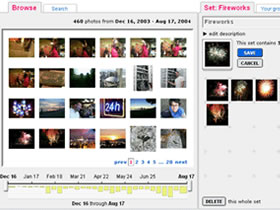 In a justly famous essay written in the now remote 1998 the theorist of new media Lev Manovich acknowledged database as an essential element of the new-born digital culture and he built up a theory inspired by the well known Erwin Panofsky ‘s study ( perspective as symbolic form ) where you could recognize the “sensible signs” of a spiritual content in the perspective methods adopted by the human being. So according to Manovich, database  the new contemporary symbolic form  contains “the new way we configure experiences of ourselves and of the world. After God’s death (Nietzsche), the end of Great Illuminist Tales (Lyotard) and the arrival of the Web (Tim Berners Lee), the world appears as an endless and unstructured collection of images, texts and other archived data.”

The endless data collections have always fascinated software artists who have been trying to imagine and divulge alternative interfaces since the web appearance. They are trying to build up systems that can filter database raw material and return it in an each time different  in the aesthetic aspect and message  formalization. That’s the reason why Google-based artist projects have been drawing crowds for a five-year period. These projects use the stream of texts, images and videos drawn off from the bottomless well of the most famous and used research motor of the world transforming them in news generators, landscape images, quizzes, micro cinema and happenings too.

But a new phenomenon has been launched out on the net since 2004 and after an irresistible rise it has become one of last years most interesting web services. We’re talking about Flickr a web site where you can publish your pics in a free web zone. You have also a series of social networking instruments (you can exchange comments and messages with other users) and an effective mapping system of the downloaded stuff carried out by tags (images have tags defining their thematic or subject.)

The decision of making software API (the programming interface) available gave rise to a series of chain experiments. For instance the author of interfaces as Newsmap and Social Circles Marcos Weskamp has just launched Flickr Graph, a Flash application to visualize in an utter dynamic map, active social relationships among Flickr users. On the other hand Mappr project  by Stamen Design  dispense locality pics on a geographic map of the United States . Flickrmap has a similar concept; it offers the possibility to download on your web site a world scale map where your pics  downloaded in Flickr and with an appropriate geographic tag  can automatically appear.

The ColorPickr project by Jim Bumgardner is very appealing. It is an interface that classifies your surfing through the huge collective photographic album by a chromatic criterion. By selecting a colour from the central palette a series of pics based on the tonality chosen appear.

But images can also change into words: The Spell with Flickr project by Kastner gives you the possibility to write using photographs of letters exclusively. Fixr is more conceptual; it asks the users to describe an unforgettable place or situation and users will receive in exchange a very similar to their description image.

Psychological-social mechanisms that explain the triumph of this kind of service are voyeurism (the pleasure to peep at someone else’s pic) and exhibitionism (the pleasure of show a certain image of you.) These are the conceptual chief supports of an interactive exhibition organized by Amsterdam ‘s Mediamatic. The Flickr Peep Show (June 2005) was an installation where visitors could peep through some holes in a darkened window. Obviously behind the window there were some pics picked up from the Flickr database. If you sent a text message with your key words you could “guide” the images on the screen and you could choose  as real voyeurs  your own favourite show.