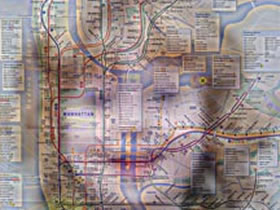 The immateriality of the new media art creates confusion in the world art system to the point that at its start the ownership of this digital works to the traditional and institutional art system was in doubt. But this is the real exciting aspect of the phenomenon. The works created through the new technologies are, in their pure form, software, that is nothing but 0 and 1, on and off. Simple electromagnetic impulses that, being digital then electric, are naturally immaterial.

This art form is composed of a code appropriately written by the artist. So the code is like colours or clay that the artist usually mould to create something. Results may vary, as always happen in art, most of all because of the higher versatility of the digital instrument. However the art worth has always been immaterial, as we are delighted by its aesthetic, so the net art is a little bit closer to the substance that constitute its own worth. After some year from its naissance, let’s see where the media art market arrived, but most of all let’s see how much buyers and collectors have understood about the phenomenon.

The pure essence of media art is then the software. And the only one, so brave to sell it, is him again: Steve Sacks, manager of art galleries in New York and Seoul . His website ( www.softwarespace.com ) sell artistic software and send them to you.

Steve Saks sell enough software. But he explains that the market asks mostly installations, because buyers, institutions and museums included, rather prefer that the artist gave to them the most right instrument for enjoy the work. Actually, most of the installations sold by the gallery Bitforms are simple net.art works installed on PC with touch screen monitors. “Buyers, from collectors to corporations, still prefer a material object rather than a software”, says Sacks. It doesn’t matter if they pay from 200 to 10.000 dollars!

Pay attention though. Software are not always so cheap. Mark Amerika sold the Filmtext DVD to a private collectors for 10.000 dollars and the famous Guggenheim paid 15.000 dollars each for two net.art works: Net.flag and Unfolding Object.

There i salso who sell the access to works on-line, as Waiting Room by Mark Napier. The same artist represented by Bitforms states that “sell installations it is just an intermediate methodology, waiting that buyers will understand the real worth of softwares”. There are brilliant installations in the market that contradict this theory, as the mirrors of Daniel Rozin to the works with led by Jim Campbell. These are works that use digital technologies within traditional materials. Once again, results may vary from interactive sculptures to moving painting.

Press is a widespread sale methodology in the digital art world. Works, created with appropriate software written by artists or commercial, are printed on canvas or paper and sold to different galleries such as Bitform or Analix Forever from Geneva. Even here in Italy there is an on-line gallery called Graphola, that sell printed matter at bargain price (150-200 euros). Graphola has a selection of 100 artists and its director says that sales are most of all in the sphere of the interior design.

There are also net.artists that sell even fetishes, objects that usually remind the on-line work, merchandising sold as work of art. So, while the new media marketing works to increase sales and support new artists, it is necessary that buyers are informed more and more to find out which are the works worth buying.

Only spreading the new media culture will lead us to a solid new media art market.