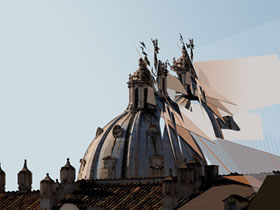 Davide Quagliola is among that group of sensible Italians who left their native shores to move to less sunny yet more hospitable places. Having moved from Rome to London, his work had been long associated with that of HFR Lab (a visual experimentation duo together with Chiara Horn), a project of sound and video, graphic and music on the border between installations and live performances which, also thanks to the good choice of moving to London, succeeded in creating a considerable professional connection net which probably would have been impossible to have living in Italy.

Lately Davide has continued his artistic work by himself using the name of Quayola , always attentive to what happens in Italy and connected to the growing artistic movement of electronic audiovisual experimentation, yet constantly collaborating with internationally well-known English musicians and video artists (such as D-Fuse, Uva, Flat-e, Addictive Tv, Lovebytes and OneDotZero ). Davide’s work has always been impressive for its graphic and video formal rigour, for the urban visionary attitude which characterizes all his works, from Bitscapes and Cityscan of Hfr-Lab times till the recent Architectural Density and Path to Abstraction as Quayola. Their coherence can never become dullness; on the contrary it seems to buil up a bridge even towards those who are not particularly familiar with the ultra-experimentation of new media.

Observing his works, just even on his web site, can be enough to understand how original and interesting his ideas are about the relations between shape and town-planning, colour and sound. Ah, just to give a hint, I think we should dedicate a special on brain drain from Italy to other countries… Which is neither a minor issue nor cheap rhetoric and the loss of artists such as Quayola is solid evidence.

Bertram Niessen: What’s the relation between sound and video in your works, I mean, how is the synaesthesia structured from the point of view of kinetic and chromatic relationships?

Quayola: In my work sound plays a different role according to the project. I’m currently developing a project called ” Path to Abstraction “. That is an investigation on relations between sound and image inspired by pure sound representation: the waveform. Video creation is divided into two main parts: the first is the analytical representation of a certain sound track through an oscilloscope digital simulator. During the second part I re-interpret that waveform with shapes and colours which I’ve drawn and animated. The result of that process are videos which are similar to a waveform but interpret the sound in a very personal way. The criterion according to which visual and sound elements are associated is totally personal and not created by a software. This is to underline the substantial difference between human being’s interpretation of music (according to sound associations) and computer’s (according to frequency bands). The final videos are actually a combination of the two methods of sound representation.

Bertram Niessen: How important is the role of technologies in what you do? Are they bounds? Are they structures? Are they just a “chance”?

Quayola: Technology is undoubtedly very important in my work, not only for the actual creation of the product, but also for the abstract development of the projects themselves. In my work the borderline between the idea and its accomplishment is very thin and sometimes does not exist. With my work I explore different research fields, from video to graphic design, from performances to installations and in each of them I cannot imagine something which is not connected to technology; thus I believe my use of computers as creative means is not a precise choice, rather a natural direction due to the times we live in.

Bertram Niessen: How important liveness is in your work and how do you organize it? And is the way your performance is organized binding or can you adjust your shows?

Quayola: The performing component can be found only in the projects conceived as such. As I said before I’m developing a project called Path to Abstraction which, among its different outputs, includes the live video performance. The live component of this project has been structured from the beginning, each video loop has been created on a musical pattern according to a precise bpm and it has the fuction of a precise waveform. In live performances I associate these waveforms to music by using a software which adjusts bpms.

Path to Abstraction is a flexible project which can take different shapes, as far as screenings,installations and live shows are concerned. It includes multi-screens facing different directions and LED panels with different sizes. For example, I’m preparing a set up for my show at Mapping Festival in Geneva : it’s a multiple output using some screens to represent “pure” waveforms and some others to represent the “elaborated” ones.

Bertram Niessen: How important is the project in your work? How do you conceive and organize it?

Quayola: The idea of project is fundamental in my work. Many of the works I’m carrying on with haven’t a precise beginning and end, rather they can be seen as projects exploring a particular process. It is thus very important to draw clear borderlines within which to experiment/research as for example in PTA, where those borders are clearly drawn , both on a visual/compositive level and on a conceptual/structural one.