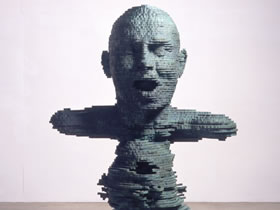 Marble, bronze and wood coexist with reflected images: what firstly appears as an abstract monolith, sudden reveals another face thanks to concave or convex mirrors. Marc Didou’s original way of assembling the ancient art of anamorphosis with a cutting edge medical imaging technique is constitutes a remarkable encounter between art and science, where Magnetic Resonance Imaging (MRI), set free from the scientific laboratori, is made available to the public as sculptures to interact with.

Marc Didou is a world-renokwn Breton sculptor, winner of the Michetti Prize in 2005, with many solo and group exhibitions both in Italy and abroad. Since the ninetees he has been using MRI as a new medium for sculpture with the result of re-thinking his art research and production after the encounter with this technology. Based on the physics principle of nuclear resonance imaging, thanks to complex software and data elaboration procedures, MRI creates images of the human body particularly used for medical research and diagnosis.

Besides the images, the scansion procedure itself plays an important role for Marc Didou, who has undergone an MRI examination as experimental subject. Still inside the scanner tube, with a small mirror as get-away point toward the outside to reduce claustrophobia, the experimental subject is overwhelmed by the rhytmical thumping sound produced by the magnetic gradients interacting with the radio frequency impulses. Neither a performance nor a form of body art, but rather the ‘suspension’ of the automatism of the sculptor’s hand. The condition of immobility inside the scanner, in fact, allows the artist to overcome the cliché of the sculptor as a demiurge, the sculptor as the unique creator of the artwork. It is the machine itself, on the opposite, which starts to sculpt the scans.

In Marc Didou’s art production the relationship between MRI and sculpture becomes perceivable at a material and conceptual level. The digital images produced by MRI become material layers; the mirror present inside the MRI scanner becomes the anamorphic mirror; the immobility of the artist-experimental subject becomes the immobility of the spectator in front of the anamorphic mirror, which obliges the viewer to maintain a precise point in the space in order to be able to perceive the reflected image and, therefore, the sculpture in its completeness; the immaterial rhythm of the scanning procedure becomes the materials of the layers one on the top of the other, layers that are made of traditional materials such as bronze, wood or marble, and worked manually by the artist.

The property of the magnet to attract metals, which is at the core of MRI functioning, prohibits to place any metallic object nearby or inside the scanner. A large number of Marc Didou’s sculptures are made out of metal, for example the monumental “Eco” (2004) and play with the property of the magnet of attracting and, simultaneously, pulling away the viewer. Some times the material used is bronze, other times it is iron: iron can be forged, bronze can be fused. Despite the impression of staticity, due to the materials employed, Didou’s work is always characterised by actions : to lie still inside the scanner, to listen, to scan, to draw, to forge, to fuse, to cut, to re-assemble, to create reflections with mirrors and further on. Sculptures are firstly conceived inside the MRI scanner and then completed by the viewer’s perceptual acts.

This brief interview, originally held in French and here translated in English, deals mostly with the influence of MRI on Marc Didou’s artistic production. By presenting some threads for a understanding the conceptual rigor behind the work of this sculptor, it highlights the aesthetical possibilities of cutting edge medical imaging techniques

Silvia Casini: In the past years we have witnessed a growing number of artist-scientist collaboration, often thanks to the support of public and private institutions (for example, the so-called ‘artist-in-residence’ model common in Great Britain). Scientists seem to take advantage of art in order to communicate the general public the contents of their research in a sexy way, thus making available the abstract insights of science. Artists have gained access to advanced technological instruments which allow them to cover unexplored path. In my opinion, however, the artworks resulting from these collaborative projects are often merely functional to comunicate scientific issues, thus lacking the dimension of ambiguity which, paradoxically, can be found more easily in the scientific images and artefacts per se before any artistic intervention.

Marc Didou: Collaboration has become also in the art world a very usual working habit which most likely corresponds to a frailty of the individual facing the diverse and complex technologies all around. I am no man of science at all and I cannot explain the reasons causing a lot of artists to present their art as science, since, in my opinion, these two disciplines are quite separate and follow different paths. However, I have always thought of the trajectory of art as a circular or spiralling evolution whereas science and medicine project themselves forwards in a much more linear way.

This is the reason why I think it difficult to develop a real collaboration which would go beyond what you describe, a real exchange where art would affect science as much as science would affect art. When I get in touch with scientists, doctors and radiologists, I do not mean to dissolve my activity into science, but simply to pursuit my work as a sculptor benefiting from a tool box which does not belong to me.

Silvia Casini: You have undergone MRI in order to create your sculptures. The departure point is, therefore, your own physical body, immobilised inside the MRI scanner. Do you think that the use of your body has influenced the theoretical conception of the work? I mean, does the original idea you had before undergoing the MRI examination change at a successive stage or during the examination itself?

Marc Didou: I think that starting a work with a very precise idea weakens the interest in its execution. It is for this reason that I always try to make the starting point as open as possible. The risks and the changes are part of a job. When during the examination I keep as still as possible, I do this so to allow the image to be read, but later everything overlaps and becomes more fluid. Ideas and decisions pile up and get tangled, they do sometimes cancel each other.

Silvia Casini: Scientists regard the scans obtained from MRI not as representations, rather as statistical data projections. The general public, however, looks at these scans and interprets them as images which might call for analogies with other archetypal images. Can you explain me more in details what you have seen in MRI images?

Marc Didou: I was not interested in these images in their details, that is I have not examined them individually in what each image could represent. I have considered them as an assemblage because only in their succession these images reveal this kind of rhythmic “neutral” power. This neutrality does not exist in the works I completed since a sculpture, a painting represents a sum of reflections, decisions and knowledge. Getting rid of anything useless, being able of strongly detaching oneself this is what really matters to the artist when he starts a work. Since I believe that will hinders rhythm, it is only in the “passive” use of this kind of machine that I could reach this rhythm. With the images produced by the magnetic resonance after each sequence I find myself owning a new alphabet with as many letters as I wish and infinite combinations. Manipulating all this I feel I shape such a plastic and rhythmic material directly so that I never need to ask myself the questions about the imitation of form. I try to evocate only forms I work with, but certainly all the transformations I achieve refer to other dimensions as from a phenomenon of assimilation to other images.

Silvia Casini: In your sculptures the dimension of possibility, the passage from the immaterial to the material and viceversa are always present. The MRI scansion of the human body does not produce photographic snapshots, but rather bi-dimensional models (sagittal, coronal, axial) of the distribution of cerebral activity. This departure from the idea of photography as representation seems to take us to one of the paths undertaken by cinema and photography, that of photography without lenses or cinema without the camera  Man Ray’s rayograms, Len Lye’s film Free Radicals (1979), Brackage’s Mothlight (1963) are good examples. Your sculptures often embodies two possible points of view of the same sculpture, two images, one real and one virtual. Why did you choose the technique of the anamorphosis to achieve this result?

Marc Didou: That was achieved through several stages. I have always shaped the form in the idea of an abstraction. Never could I have conceived a sculpture as a representation of a face, for instance. In this sense and as I have already stated I am no figurative artist. My way of working totally differs from classic observation, followed by formal transcription. The first time I made use of a curved mirror to walk through the work backwards, as a return to verify or ascertain what might have been the starting point of this work, that is the body. When the image appeared, its figure curiously did not worry me because it had become something different from a simple human representation, as a matter of fact something which well corresponds to this dimension of the possible you mention. Later on, I have actually started to get interested in anamorphoses as a virtual space, a widening of space. One associates anamorphoses with perspective, mathematics or optics, but it is very rarely integrated as real artistic medium.

Marc Didou: It is by grafting to my hand and eye an instrument which allows me to analyse reality in a more objective way, that I have overcome myself in a sense. An MRI scan is for me like a vibration-drawing, transparent and monochrome, that neither my hand or eye could have observed or drawn. Moreover these images reveal themselves when I lie inside the scanner, that is to say in the shade of my perception, in my blindness. I generally think that vision is the main place of all our senses, that it also exerts some tyranny on the touch. In my opinion there exists a sort of hypertrophy of vision – an atrophy of the touch and the other senses. I do not believe that the idea of associating sculpture to the touch is commonly spread, and when I earlier evocated my experience of blindness inside the scanner, it is really because I found myself in the unusual situation of a blind sculptor, which allows to exasperate the sense of touch to the most extreme point.