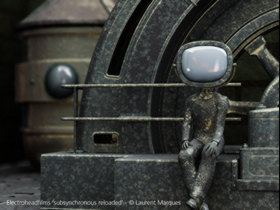 “My shorts of animation are like dreams transformed into a colour picture. I like exploring different methods and tools. The digital combined with video, sound, 3D in an artistic way gives me a unique way to explore the unconscious with a touch of sensibility and emotion. The light and the plot are my pencils as in the remaining of a 16mm films.”  Laurent Marques

Laurent Marques was born in Bordeaux ( France ) in 1971. He worked in the advertising graphics for over 12 years. In 1996 began to work with the artist and sound designer Patrick Malinguaggi. In 2002 after many 3D and audio experiments, the video-animation Subsynchronous Whirl was born from the idea of a demo. In 2006 Subsynchronous 2: Reloaded come.

Marques currently is exploring the opportunity of the Actionscripts of Flash tied with the use of the interactivity. I managed to call Laurent and to talk to him about these themes, from his beginnings as a graphic designer and his first studies in fixed images and his first collaboration, to his last project and detailed study of a common language, at this point, such as the Flash one, to obtain successful results not only on a technical level but also on an emotive communication level, within the interaction design. Talking to Marques his artistic and cultural references emerge clearly, made by cinematic deferments to great director such as Lynch, Lang, Kubrick, Tarkowski but also his interests, which refer not only to a more detailed study of the dialogue between sound and images but also and above all to an analysis of what is the future of films, of cinematography on web or per software, of the opportunity, of the interactive dialogue with the public.

Silvia Scaravaggi: starting from the beginning, from the collaboration with the artist and musician Patrick Malinguaggi, how did you begin to work together? What have inspired you?

Laurent Marques: I know Patrick since we were children. In 1983 I began to paint and Patrick to play (the keyboard), but we didn’t know the implications that we would find between the two arts. I studied also informatics, programming, graphics, but my technique was so immature that I didn’t find some connections among painting, music and computer. Then I began to study biology and ecology at the university but I wasn’t satisfied. I decided to do what I preferred: painting and informatics. My mother found a connection with the advertising graphics. It was just my way. So I studied for 2 years in academy and found quickly a job. I became a graphic designer.

I worked on the fix images for a long period but one day the movement fascinated me: I had seen Eraserhead of David Lynch at the telly. So I began to work on the “time”. After effects becomes my instrument for the motion graphic. I knew that a sound could stay on an image but I didn’t know how to make it. One day Patrick played me some tracks of his: a classic concert. We worked on a midi with an Atari ST and Cubase. That day we talked about my work and our collaboration began.

It was 1996. The first collaboration with Patrick was like a game demo, with a graphic, painting, photographwe even knew what we were doing!!! Later when I found out the author’s cinema, I recalled the magic of the images and sound, above all in the work of Lynch, who has always influenced me, as Akira Kurosawa, Stanley Kubrick (2001 A Space Odyssey, was my fetish film, regarding sperimentation on images and soundtrack), Fritz Lang, Wim Wenders, and later Andrei Tarkovsky. According to me, Tarkovsky is a genius, with a film like Solaris, the Soviet counterpart of 2001 of Kubrick. Both these directors believe in something, in something secret, in the depth of mind. Personally I made this experience with Patrick because the sound transmits something abstract and the image is the contrary but sometimes it happens the contrary and it’s magic.

Silvia Scaravaggi: I would like to talk about the work which you are working at

Laurent Marques: At the moment I am studying the new Medias above all Flash Actionscript, in order to communicate all over the world and cross the French borders. With regard to the interactivity, I am testing different possibilities and I am building I have always found troubles in France , above all in the south, in showing my work or sharing experiences in films, 3D and art design. Besides I live in a touristy place. The only positive exchange was in Paris with Michael Roulier (alias cinematicfilm.com) my video Subsychronous is on his site. This collaboration is obviously free, underground because this is the situation of many like me, who deal with a culture, which in France has not yet been recognized.

Silvia Scaravaggi: I believe that also in Italy there’s a lot to do for the new research and the new Medias. However in the European scenery something is changing, isn’t it?

Laurent Marques: In the art there’s a new exchange of ideas, a new approach, but I believe that the current art is mostly transversal in comparison with the past. I mean that before each art explored the interest of the moment. With the photography the painters asked themselves: why should we go on with the realism? Why we don’t introduce the impression of the light rather than limit ourselves to a realistic picture. And so the painting become more sensitive to the environment, to the world, to politics, the object of the art become more conceptual or advertising. Today it’s internet which is upsetting our current and future life.

Laurent Marques: Patrick and I created Subsynchronous to create a mutualism between image and sound. We worked a lot on this concept, in which the sound has a prominent position. So I worked according to the sound that I heard and I asked to Patrick to create sounds by my ideas. In my mind the images come before and then the history is created. I was influenced by the music since I painted; the sound speaks to me about the movement and the narration. It is a very rare concept in the cinema industry; only a few of authors  those who I cited before  work so. Electronic experimentations, limbic frequencies, the sound and the noise translate what cannot be represented; for example a stretch, a pressure; dark setting and a beautiful poem in which is based everything: “wide awake right now/ when I should be,/ need to be/ unconscious”. (© Toby Thain  21 Feb 2000, 3.25 a .m.).

Laurent Marques: I worked on technique 6 years before starting Subsynchronous and I’m still working on the animation. It is an unceasing learning but the technique isn’t enough. If I see the Hollywood films, I realize that they aren’t eternal films; if I see Metropolis (1972) of Fritz Lang, instead, I don’t think it is something obsolete. Lang really created the seventh art, the cinematic language; he worked on the vision of the future (imaging the regime of the Germany during the 2WW, occurred a little later). There are all his ideas on the future of the technologies: the robot, the city, the production. And he closed his film with a wonderful message: “the heart is the medium between hand and mind”. Obviously the Fritz Lang’s film would be technologically better with the current tools, but I would change anything.

For this reason my technique on Subsynchronous is like an anti-technique: with the old, the dirt, and the rims. The only technically high element is the 3D, but I worked a lot to break the perfection which makes it imaginary. I always say: “I hate the 3D” because it’s too predictable, logic and it doesn’t permit the coincidence. So it was a challenge for me to work in this way. The composition helped me a lot for the inconveniences, the light, the depth, the touch of the old lenses, the plot for films. The technique gives me the opportunity to realize my ideas and not the contrary.

Silvia Scaravaggi: how do you come to the interactivity idea? Is it your new direction?

Laurent Marques: I would have made a film but it was too much complicated because it means actors, stages, nothing of abstract, parts of ideas or sensations. On the contrary the videogames have more perspectives, young people love videogames. I don’t like them. When I saw Lost Highway of David Lynch I understood what my direction was, how should be a film. The scenes are as a labyrinth with different opportunities, pieces of ideas, abstract images which matched like a puzzle. But Lynch has never cleverly said: look, it’s a true story. No, Lynch believes that every viewer can perceive a film as they want. So I thought that if a film must be perceived, everyone can see a different story.

And so, why don’t we interact with the story and create it as you want, as in your life? If I make it I will go here, if I make that I will go there. It becomes something very powerful; each one can tell what happens in their story. We can begin to create an interactive film with Flash. I would like to make the changing of image and sound interactive with the mouse. I would like something organic and smooth. The interactivity could give pieces of information to someone and not to other; it depends on the sensitivity of each one. I would like to track the path of these people in order to understand how they react, what they feel. I don’t know yet if I will start with an interactive scene or animation, with a particular poem, light or setting. It’s simply a personal inspiration; the experimentation will teach me how I can translate these concepts in work for a new and interactive web site.

Silvia Scaravaggi: if you think that the interactivity could be a utility in the art and in the real life, what will be?

Laurent Marques: Artistically speaking, there’s no one. It is a new art, like the animation. It will have an artistic code and the code self will create art. The IMHO developer need to be first of all artists and then coders. It’s here that science culminates in the art, like Leonardo da Vinci. In the real life the interactivity is surely useful, because is a vital art which allows us to perceive the real world in order to create a new reality with our mind. People can share and interact with diverse worlds, artistically speaking. These experimentations can be used also in the psychotherapy, in the analysis of the unconscious, in the science.

Silvia Scaravaggi: Once you said to me that you believe that telly and interactive films are the future of the Medias. Now, how do you see the future of our Medias?

Laurent Marques: I see LCD screens become paper and communicate without a break with internet, telephone and television. A LCD screen is like a book on which we can move our fingers. You could become your film on a LCD screen and see the results on your plasma television. In a real time!!.