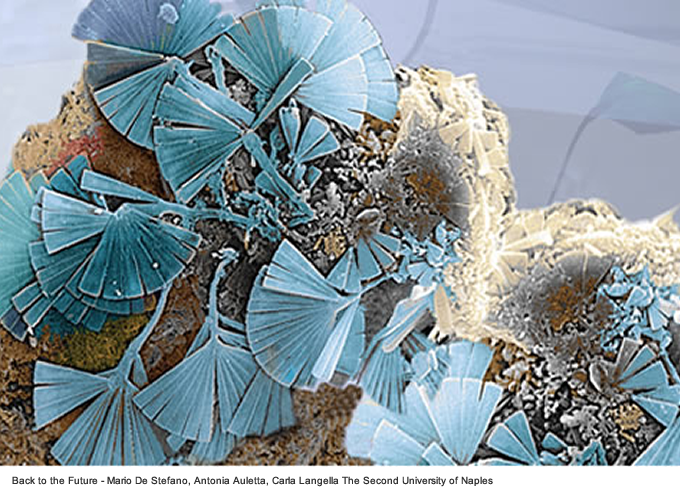 A team of researchers from the Seconda Università of Naples formed by Professor Mario De Stefano from Environmental Sciences Department, Pharmaceutical Science for Environment and Health Section, myself from the History and Environment Industrial Design Department, “Luigi Vanvitelli” School of Architecture and by recently graduated at this same school, Doctor Antonia Auletta, awarded with honorable mention during the 2009 edition of International Science and Engineering Visualization Challenge, the prestigious international competition of scientific photography organized by National Science Foundation and by “Science” magazine.

The competition, reaching its eighth edition, aims to prize the “visual language in communication and science”, namely the ability researchers and divulgers have to make use of visual means, photos and videos in an innovative way, in order to promote the understanding of scientific research achievements.

A panel designated by the National Science Foundation and Science magazine, selects every year the best contributions in each one of the following categories: Photography, Illustration, Computerized Graphics, interactive Films and non-interactive Films. Winners’ contributions are reported on a Science magazine issue dedicated to the competition, of which the 2009 edition was published on the 19th of February 2010.

The contribution of the Team, entitled Back to the Future, predominated in Scientific Illustration category. It consists of a graphical representation composed by a photo of the fan-shaped colonies of the diatom Licmophra flabellate taken with an electron microscope in the foreground, juxtaposed to a render image of an innovative solar paneled cantilever roof taking inspiration from it, baptized Edo. 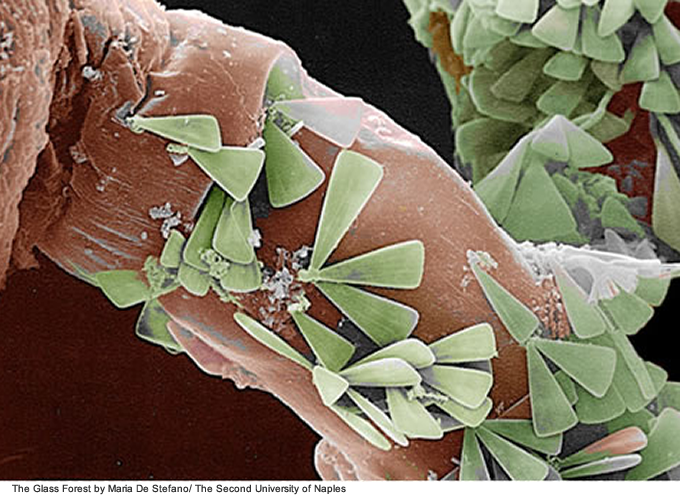 This composition illustrates the scientific approach of Biomimetics, a discipline aimed to create material products and innovative devices based on principles, logics morphologies and structures existing in natural systems. The innovation laying within the biomimetic approach is also evoked in the title of the composition, Back to the Future, which alludes to the need for an understanding of the functional significance entailed in employing nature’s morphologies to design materials and objects of the future.

SUN researchers’ triumph is outstandingly significant moreover because it redoubles the success achieved during the competition’s 2008 edition by Professor De Stefano who earned the first prize presenting his The Glass Forest, elected Best Science Image of 2008.

In that circumstance Professor De Stefano and Seconda Università di Napoli ( Second University of Naples) respectively stood out as first Italian and first Italian University winning the competition since its beginnings.

Diatoms are unicellular weeds ubiquitously diffused in all natural and artificial aquatic environments. Counting more than 200.000 species, they constitute the second larger group in biodiversity among photosynthetic organisms, and they represent a remarkable ecologic factor, contributing to carbon dioxide absorption and to every aquatic environment food chain.

Among diatoms’ peculiar features, we find the capacity of extracting silicon from water using it to create a unique silicon wall shell called a frustule, essentially consisting in a bivalve container encasing the living organism. Recent studies brought on by the research group led by Mario De Stefano pointed out that such structures seem to be able to concentrate or select light in the most efficient way, therefore constituting advantageous benchmarks to be borrowed with the aim to design new, more efficient solar energy uptake systems .

The development of the concept for Edo falls within a research plan, subsequently widened in a project now being managed by engineers, which has involved Carlo Santulli‘s specifics skills in materials engineering. For the Edo cantilever roof project, the colonial specie Licmophra flabellata was chosen as a reference since its natural shape recalls of some sort of fan-shaped solar panel clustering in aggregates of several organisms in order to accumulate all the light they need for their survival, this characteristics being indeed of relevant interest for eco-sustainable design.

Edo project has a distinct connotation in terms of “design of experience”. The experience characterizing Edo is influenced by its direct reference to nature, recalling the biological organism that inspired it. These references sensitizing users about topics concerning the environment and the value of its resources.

The upper part of the diatom-like cantilever roof is made out of plexiglass boards (shaped as the individual organisms of the colony) encompassing a flexible photovoltaic film made of amorphous silicon.

During the day, the photovoltaic surface gathers solar energy, accumulating it in batteries to then be used as a power source for a net of led distributed over the bottom part, illuminating the area under the cantilever roof at night. The energy that is left can be available for users that could be able to “download” this “free energy” through a universal port, allowing to charge or activate portable low-consuming devices such as mobile phones, smartphones, music players, laptops and cameras.

The opportunity to take advantage of the few minutes of waiting for collecting a minimum amount of energy for one’s accessories can be extremely useful for those who live a wandering-kind of live, pertaining to the “new-madic” contemporary fashion. 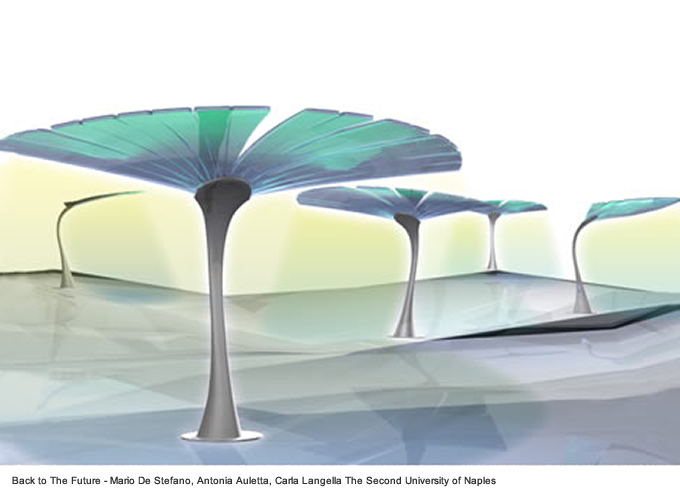 The reason that led us to decide to share this experience with Digicult community is mainly that this account may propel many researchers and professionals to take part in international competitions, even those which might appear not to be concerning one’s usual operating field. Even in recent past it was rather unlikely for a designer to appear on a magazine like “Science”. But things are deeply changing.

To represent complex concepts and processes such as the ones about scientific research, summarizing them in a single, clear yet appealing image is then a task concerning graphic designers? Or researchers? Artists maybe? According to the outcomes of competitions like the one Science promoted, what emerges is that the most appreciated works are those in which all these fields combine and co-operate.

The core factor is the co-work amongst usually unrelated disciplines (biology, design, materials engineering, graphics). These are experiences that do indeed require a great commitment to cohesion and sharing, to choose common language, the will to explore others’ fields, being curious, yet maintaining a respectful, humble attitude.

A further aspect that brought us to write about all this is the fact that one of the research team members there was a young student, still undergraduate at that time. An element that highlights the importance of integrating didactics with research so that didactics would get enriched by cutting-edge research contributions, whilst research itself would be getting vital lymph from creativity, curiosity and foreshadowing energy young generations have.

Italian culture and mediterranean particularly, are keenly turning towards integration, multiculturalism, flexibility and merging of groups, therefore predisposed to face the challenges of such a fluid cultural dimension as the one that characterizes our present times.