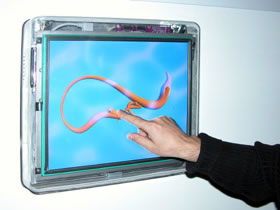 You can bet on it. As soon as the news gets around through reference mailing-lists, word of mouth, international festivals, interviews by the most acclaimed critic or curator of the moment, infinite will be the praises raised to Software Art Space ( www.softwareartspace.com ), the second operation performed by Steven Sacks, founder of the phantomatic Bitforms gallery: digital in conception, but with a physical (micro) headquarter in New York. In that same city and neighborhood, Chelsea, in which an apparently infinite army of galleries and exhibition spaces devoted to contemporary arts seem to be struggling to be part of the quadrangle between 4th and 5th streets, determining the destinies of the international art market.

Fooling around is useless. As useless is the tell-tale reminding us that praises and criticisms will come about: real critiques would be hard and direct, not pats on the shoulders to constituted order. So the next question arising is: why is a project whose aim is to diffuse art to the masses (notice how the authoritative Wired magazine defined Sacks as he who”brings software to the masses”) criticizable? Well, we will try to explain the reasons by analyzing the project under various points of view.

I would say that a good starting point could be the nature of the project itself, its philosophy. If “bringing software art to the general public” is the project’s final ambition, I wonder how exactly Steven Sacks is expecting to acheive such a goal through the use of the technological instruments currently in commerce and through the use of any multimedial fruition tools: graphics, sound, image and interactivity.

A simple analisys reveals how the ingegnous technological device requires having a dedicated PC in the living room, in the bedroom or, possibly, in the bathroom, an ergonomic wireless mouse or a practical touchscreen, readily available at the grocer around the corner, and, obviously, the cd/dvd on which the artwork’s executable file is installed. Someone could possibly overcome my skepticism and convince me that a high number of persons around the world will decide, tomorrow, to buy online an artwork by Golan Levin, Casey Reas or Lia, and to exhibit it into their house, rarely playing with the interactivity and generativity of the object. This idea of “fruition” ignores a general trend that is commonly accepted among multimedia professionals: multimedia and interactive products guarantee a low level of emotional involvement when experienced at home, amidst everyday life, without creating a diect and interactive experience with the technology and with the condition of sensorial immersivity that it can and must generate.

And for everyone seduced by the mecenatist aurea exposed by any project that hides a blatant act of commercialization behind utopian conceptions of horizontal diffusion of digital arts, we remind that each of the 10 artworks in the Software Art Space catalog costs exactly 150 euros.

We could discuss, as usual, about “who decides” which artists will gain ufficial recognition amongst the internationally “respected” critics and curators: with all the respect to all of the pioneers called to join Software Art Space, some of
which i personally know and regard with human and professional respect, some of the projects are really scarce, evaluating them in comparison to the general level of quality of the other artworks on the market and in comparison to the value .of the artists themselves. The quality of the selected works also makes me reconsider the curatorial choice, or even the artist-gallerist relationship, culturally and economically distant from the ocean of digital and software artists working on a daily basis to find a adequate mix between art, technology, experiment and communication. This generation of artists feeds the underground circuits and keeps them alive. This is the only real area in which some experimenting is going on. A soul that is full of life, and that leads electronic arts despite any of the spasmodic shots at “officialization” and “aknowledgement”.

Another thing that truly surprises is the choice of the commercial “cost” of the works. 150 euros are nothing in the rich and consumist western world; what a noble value is, thus, given to the digital work of art? A part of the contemporary art professionals have been trying for years to find a compromise and a dialoge between their world and the one of the underground generation of electronic art. To acheive it they decided to borrow the base practices of the art market and to apply them to digital experimentation: you decide the price of an artwork and the artist’s cutural value gets automatically transformed to an economic one.

A fundamental doubt arising from such an operation sounds like: letting software art inside mainstream art necessarily creates the need to translate into prices and quotations the work of the artists, despite the identity of these forms of art? Is establishing the equivalence “work of art = money” really a process that is necessary to bring software art to the general public? (together, naturally, with all the other forms of electronic arts).

Taking for good that this process is really unvoidable and that the general public will tune in its antennas on an artwork only if it has a pricetag: how comes that the works of artists that are amongst the best and the best internationally known in one of the most active areas of digital arts get sold at totally laughable prices? It looks as if Sacks’ operation should and could produce other perspectives and ambitions. Or, maybe, we could feed the suspect of thinking that producing 5000 pieces of a work and to sell each at 150euros, times the 10 works in catalogue, constitutes a mere search for profit, despite the presence of a wider discourse that is more open minded and that deals with the commercialization, the exhibition, the diffusion and consequent survival of artists, curators and professionals that work in the world of new media art, all without great financial sustainment, to use an euphemism?

Fixing a price of 150euros for works that should allow the entrance of software art in the galleries and art market circuits, addicted to way higher price tags, doesn’t seem like an action able to offer to the general public a perception of the artworks as representative and selected from a cultural process in act, the process of digital creation inside contemporary art. The probable risk is that the art merchant or the gallerist deciding to buy one of the works offered by Software Art Space will not have the perception of having bought a work that is representative of software art, an area of contemporary art, but of a (possibly) good product at a reasonable price.

It’s a law of the market: a mediocre price such as the one proposed by Sacksdoesn’t represent a quotation and, thus, it doesn’t fit into the contemporary art market, it doesn’t identify the works of art as such, but as a consumer product. Sacks’ operation is ambiguous: the fact itself of deciding a price tag defines a distance between Software Art Space and the underground circuits; at the same time the economic value assigned to the works is not sufficient to cause its entrance in the world of contemporary art. The process of cultural value attribution doen’t seem successful or, at least, it is poorly readable. The objective data remains: every work is a product on sale on a website, to be bought and consumed on your PC.

Thoughts immediately flash to the many other international software artists that will be seduced by Sacks’ project, because the chimera of widspread profit is clearly visible, especially for a generation of pioneers that have made precise economic and not-economic choices in their lives, trusting a form of art and of communication that is establishing itself in these same years, inside a context without a market and without a structured distribution. From this point of view I understand and accept Steven Sacks’ Software Art Space project.

On the other side I ask myself what future can such an operation have, which sense can it bear in the wider context of new media art and its distribution and commercialization, its cultural value.

Maybe when I ask myself these questions I already have some answers. I ask them to everyone who has read them up to this point. I ask myself what hundreds of software artists have to say, those same artists working with code all around the world, experimenting, getting their hands dirty, trying to find ways to use their art as a source of life and minimal economic profit. I ask myself these questions and i sincerely hope that someone has responses for me. Possibly even Steven Sacks, I will try to contact him. But I know that there are no answers, only diverging opinions and different artistic and professional territories, different interests and views on the world.

But being able to open our eyes wider allows for some space for justified doubt, remaining open minded and ready for a fast change of opinion… or for its extreme radicalization.