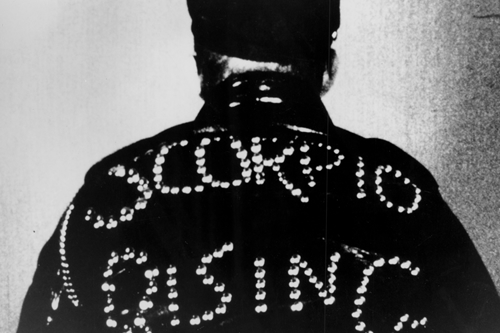 The New American Cinema  NAC, represents one of the most meaningful artistic experience within the indipendent cinematography of the ’60s, free from Hollywoodian empires and a mythopoetic all-engaging Star System. A group of directors  whose patroness and inspirer was Maya Deren  which included i.a. Jonas Mekas, Stan Brakhage and Michael Snow  began to meet at the margins of the official cinematography, deteriorating the visual monopoly of great producers. Through poor means which seemed to be a stylistic manifesto, they created a series of experimental films on the wave of the first vanguards, by then still half-asleep in the story of the audiovisual world.

The NAC was something more than a movement. There were no manifestos and the only real condensing element was the desire to free moving images from the boundary of the most compromised productions. Stan Brakhage’s Window Water Baby Moving or Micheal Snow’s La Règion centrale express an artistic revolution which appropriates again the cinema, both in terms of exploitation and execution. The two productions have opposite visions: one expresses the spatiality within the unstable violence of time; the other one expresses the time within the eternity of space.

Kenneth Anger is maybe the highest expression of the NAC school. Coming from an artistic family, he got in contact with cinema since his childhood (he played the role of the young prince in A Midsummer Night’s Dream in 1935). He directed his first film at the age of twelve (Ferdinand the Bull, 1937). From that time on, at a really foward age, he realized a series of films, which would have been a milestone for the new cinematography. Fireworks (1947), as part of the cycle Magick Lantern, won Jean Cocteau’s attention, who invited him to Paris.

Anger’s inspiration goes from the cinema of the first vanguards  in particular Cocteau’s and the surrealism’s ones  to ancient myths and occult influences (his friendship with the English magician Alister Crowley is well-known) and the pagan rituals with references to the most ancient human civilizations. Scorpio Rising (1963) has to be considered Anger’s most famous work of art. The obsession towards his own sexuality, the growing myth of the bikers called Hell Angels, their pro-nazi habitus, the power of the lether culture and the pop music of the ’50s, are the pillars of the visual experience concentrated in Scorpio Rising.

The film begins with the image of a motorbike freed from the sheet covering it. Then the actor enters in the stereotyped world of the hollywoodian gods, the myths of consumption which are presented little by little in the story. Some seconds later the same boy begins to repair his motorbike. He changes the pieces, substituting them. Everything is played without sounds, noises or voices. The only music is the one coming from the epoque of Rebel Without a Cause, i.e. the youth of the American economic boom, between the end of the ’40s and the beginning of the ’50s, when pop music was linked to a series of images apparently consistent, but bound with a forthcoming, obscure omen.

The paramountcy of red is quite violent and has its root in a back-lighting, almost inaccessible reality. The more you get into the film, the more the space aiming to the consistent and linear vision fades away. It is substituted by a symbolic dimension, whose godfather is the attraction cinema, rather than the false hollywoodian mimesis, put by Angar on the film surface. Anger tries to hint at a genre cinema  the horror genre  as phantom of a deformed and convulsed vision of the world. Actually the masks of his films are more anomalous forms than depravations or grotesque imitations.

Maybe this expression, together with Kustom Kar Kommandos‘ are the endemic manifestations of the hollywoodian reflex which Anger belonged to. His book Hollywood Babilonia (1958), in which he told rentless about the obscure face of Star System, gives further evidence of it.

The explicit manifestation of his ocult and pro-pagan interests in Inauguration of the Pleasure Dome (1954) and Invocation of My Demon Brother (1969) within the cycle Magik Lantern, is maybe Anger’s most famous heritage of a certain style. Images overlap and model one another. Anger creates a coherent system of symbols and audiovisual sub-texts. The magic lantern is the rapresentation of an assembly in which all the lightest substances of cinema and the surfaces of ocult, mysterious and latent forces and the attraction towards the shadows of culture converge.

Kenneth Anger was described by a great master of cinema, Martin Scorsese, as the most important person in his life. After him, a whole generation of brave experimenters and cinematographers at the edges of great productions found in these visual experiences some of their highest inspirations.

His films collect a dying heritage, i.e. the heritage of the first vanguards, into the world of Hollywood. He is the alternative replacement which implodes in the burlesque of the stars’ masked faces, and moving objects sprinkles over the head of cinema, in order to re-directing its trajectory, the trajectory of a holy monster which has never been scared in the course of time.