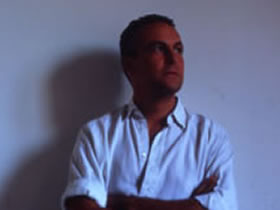 Promoted by the town hall of Monza and the province of Milan, in collaboration with Teche 05. The archipelago of Ulisse, journey with interactive installations by Mario Canali will be inaugurated at Monza march 15 th .

Born in Monza in 1952, Canali starts his artistic life in 1975 as a painter, he then dedicates himself to electronic and digital art, of which in Italy he has long been the proponent and the exponent in the foreground. After thirty years, his city has dedicated him an exhibition held at one of the cities historical centres, the Arengario, inside a wider operation that will culminate in autumn with the national videogame championships at its racetrack. Therefore it is a combined operation that declares among its main objectives not only that of approaching a wider audience, but also that of establishing a closer relationship between Milan and its province by re-launching the consideration between art and new technology as an indispensable resource for the development of the territory.

The exhibition is articulated in three exhibition projects dislocated in three different spaces. In fact, from the Arengario centre, that accommodates the larger nucleus of paintings, videos and interactive installations, the exhibition extends to the Montrasio art gallery, which hosts a selection of painted and digital work. While in the refined Tea rose centre, premises facing the Duomo, where the M.OTU is exhibited , the interactive installation based on the game Japanese game Sumo, presented at the last edition of the Techne.

From twenty to thirty years old Canali painted: a type of painting which was refined, figurative and make believe, in which we find echos of the late italian-gothic style, of the Renaissance, of the pre-raffeallite, of Odilon Redon, of Lénor Fini. Figures at times superbly outlined, at times evocatively ectoplasmatic: but these figures already burn with an aware anxiousness, they already declare, under the withheld and composed surface, the same cosmic tension that animated Edgar Allan Poe. (at least in Eureka or in “Monos e Una”).” (A. Caronia, 1997)

Between 1984 and 1985, Mario Canali abandons painting to inquire into the expressive possibilities of building animated images on the computer. He does not seem as interested in the visual reality, as much as the mental processes, the cognitive tensions and the individual and collective imagination. A reoccurring topic in his work. In 1991/92, in fact he created Satori: the only episode , in Italy, in which immersive virtual realities are put at the service of the user in a route of cognition and self training. This, and other successive installations by Canali built around biomedical technology, which traces body activity (like Oracolo-Ulisse ) it captures the conscious and unconscious movements of the spectators, it puts their attention and their nervous energy into the network, it is elaborated, and given back mutated, the spectator is invited on a journey in which the artist is a discreet guide that vanishes from sight almost immediately.” (Ibidem)

Starting from this experience, “Canali interprets that original virtual space as a mental projection, literally, making use of the so called natural interfaces: sensors that gather body signals such as the heart beat or the electrical waves produced by the brain. These signals are outlined and associated to emotional states, therefore visually translated into images that vary, exactly, according to the state in which the user-travellers finds themselves. Virtual reality, in short, ideally, becomes a mirror of ourselves”. (C. Somajni, 2006 )

The artist himself writes: “There exists a prospective according to which new technology, the virtual, internet, make a new plane of immaterial reality possible, light, not bound by the limits and the heaviness of the material and body. However, I prefer to follow another path that sees inside the digital the possibility of making abstract and imaginary worlds more concrete, heavy . A path which gives the body an increased awareness. It seems to me that It is a new look that could enrich the value of reality and life.

An exciting journey in search of one’s own interior. in a make-believe space in which science fiction and the imaginary myth of antiquity, with an artist that not only represents the evolution of a certain technology, but proposes a consideration that goes from the theory of chaos to artificial life, from quantistic physics to a re-reading of the archetype and the myth, up to the enquiry about the relationship between neuroscience to genetic mapping.

Topics and relation that will be debated April 20 th at the Urban Center of Monza with Chiara Somajni , curator of the exhibition and Antonio Caronia , who has always been a careful observer of artistic and social phenomena tied to new technology.