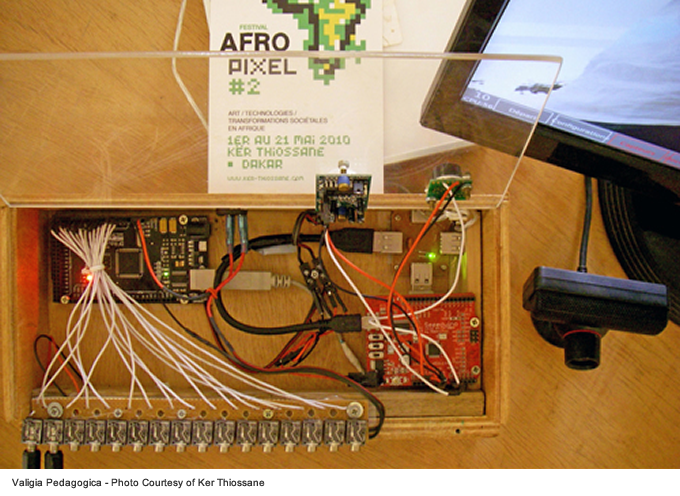 In a world dominated by digital technologies, there is much talk about sharing free resources and knowledge. After years of excitement for “new” communication tools, a different awareness is increasingly growing: creating systems and technologies to spread knowledge on a wider scale is not enough… no more. The access to knowledge is really free when a country is able to create it with its own hands and pass it on. Technological Do it Your Self is not only linked to media and digital tools, but also to wider fields like training and education.

Experts are focusing is on a rethinking of training processes in order to make interactive, open source and inexpensive technologies not only a tool but also a model to create knowledge. This represent a key chance to create and share free know-how both in Western world, which is hyper-technological and marked by vertical knowledge, and in developing countries.

Mobile A2K: Africa Interfaces Education Technology is focused on the relationship between technology and education in Africa, which programme includes three seminars organized by lettera27, a non-profit foundation from Milan, from 11th to 12th of September at Festivaletteratura 2010 in Mantua. 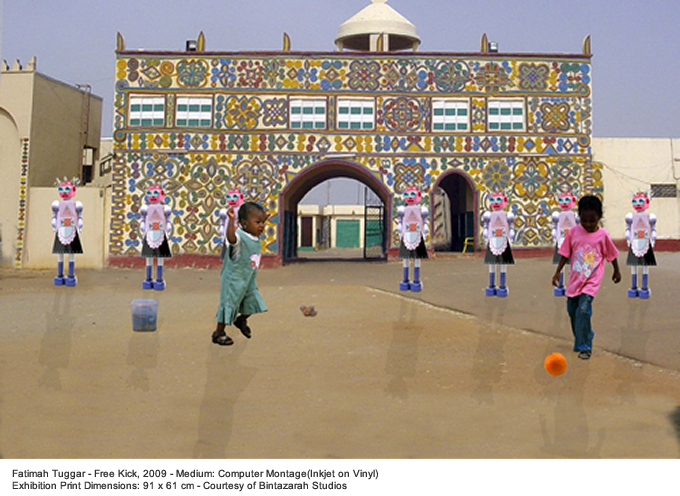 Mobile A2K gives this year’s participation the title. It is a project supported by lettera27 and curated by Roberto Casati and Iolanda Pensa in collaboration with a number of international partners. Such project is aimed to develop models of educational tools that may empower innovative educational methodologies.

These include the Valigia Pedagocica (Pedagogical Suitcase), one of the educational tools that will be introduced in Mantua during the seminar The Disenchanted Teacher. Rethinking education through technology, developed by Chiara Somajni, a journalist from “Il Sole 24 Ore” who writes about creative and social use of digital technology, and Roberto Casati. It is a meeting “in the defence of an intelligent low-tech and in support of extreme hi-tech” that will host Massimo Banzi, the known founder of Arduino, Mark Grimes, co-founder of Maker Faire Africa, an itinerant exhibition focused on technological design and digital creativity in Africa. We have interviewed Iolanda Pensa, curator of Mobile A2K on behalf of lettera27.

Claudia D’Alonzo: Tell us how Mobile A2K was born, and what does it aim at? How is Mobile A2K developing its activity?

Iolanda Pensa: Mobile A2K is also the latest project of lettera27, a non-profit foundation based in Milan whose mission is to support the right to literacy and education especially in Sub-Saharan Africa. “A2K” is an acronym for “Access to Knowledge”, then we have added the word “Mobile” to underline the itinerant, modular and ever-changing format of access to knowledge. TheMobile A2K project stimulates reflection on three formats created by three African organizations: the Pedagogical Suitcase, project carried out by the media lab Kër Thiossane based in Dakar, Senegal, a tool-kit to create interaction design and digital artworks; school books on mobile phone, Douala Ville d’Art et d’Historie, project supported by the art centre Doual’Art in Douala, Cameroon; finally, “Chimurenga Chronicle”, a “future-forward” newspaper that travels back in time to re-imagine history, issued for “Chimurenga, a magazine from Cape Town, South Africa.

All these concepts and tools are focused on the production and availability of information about urban transformations especially in Dakar, Douala and Cape Town. The basic idea of Mobile A2K is how technology can help us rethinking education, and the most effective way to support projects is to bring together existing contents, interfaces and resources. The Mobile A2K project was born in October 2009 during a meeting at the Rockefeller Center in Bellagio: three days of discussions and workshops, in which experts, partners and supporters have confronted each other on the new resources, interfaces and contents for education. In February and May 2010, the first and second stages of the Pedagogical Suitacase have taken place, and now the project is to become itinerant: from 11th to 12th September three seminars took place at Festivaletteratura in Mantua; in December two new projects were introduced, Douala Ville d’Art et d’Histoire and SUD-Salon Urbain de Douala, while the “Chimurenga Chronicle” will be issued in a short time. 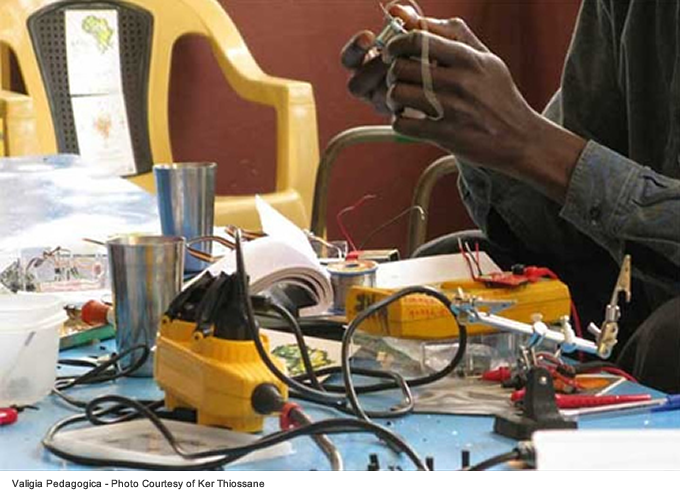 Claudia D’Alonzo:Let’s talk about the Valigia pedagogica (Pedagogical Suitcase). How does this toolkit allows “to learn doing”, and how does it help sharing knowledge?

Iolanda Pensa: Valigia Pedagogica (Pedagogical Suitcase) is a magic box. When lettera27 ot in contact with the media lab in Dakar for the Mobile A2K project, ër Thiossane was already working on it. This, Senegalese organization had just applied for a notice of competition of European Commission (APC Countries) and was waiting for an answer to its project Rose des Vents Numériques. The project focuses on technology and involves (between 2009 and 2011) cultural organizations from Senegal, Mali, South Africa, Martinique, France and Finland. In this case, technology doesn’t mean using a computer to write an invoice or an email.

This project allows creative people to programme, produce interactive tools, and make up artworks with a new kind of language. We are talking about the ultimate technological skills that few universities can provide. Kër Thiossane, dbased in Dakar (Senegal), a cultural association that organized the Afropixel Festival togheter with Jean-Noël Montagnéare doing something really new on a global scale: they are working on the Valigia Pedagogica (Pedagogical Suitcase), and itinerant toolkit that allows “to train the trainers.”

When Marion Louisgrand, director of Kër Thiossane, introduced the project during the meeting at Rockefeller Center in October 2009, the suitcase immediately began a key subject for Mobile A2K. The project that Kër Thiossane is developing in Dakar is a perfect metaphor of knowledge and learning – it is an itinerant and adaptable tool with a blank space to be filled, but it also needs someone to carry it around. Somehow, a computer is like a suitcase, and a mobile phone is like a sketchpad. Suitcase, maps and installations have become three concepts that make us reflect and imagine technology as a help to rethink education, as Roberto Casati, curator of Mobile A2K, stated.

For the time being, there are two models of the Valigia Pedagogica (Pedagogical Suitcase). Their creation, which took place in Dakar, was the first stage to train the trainers. The next step will see the former trainees train new trainers, and so on. The suitcase contains a computer, a monitor, a keyboard, Arduino, some sensors and two programmes  one that allows to test the toolkit and the other that allows to create a new suitcase. During Festivaletteratura we introduced it in two different ways: through the metaphor of education linked to technology, and through the introduction of the tools contained in the suitcase. The Mantua meeting hosted Jean Noël Montagné, one of the creators of the project, and Massimo Banzi, who talked about Arduino. 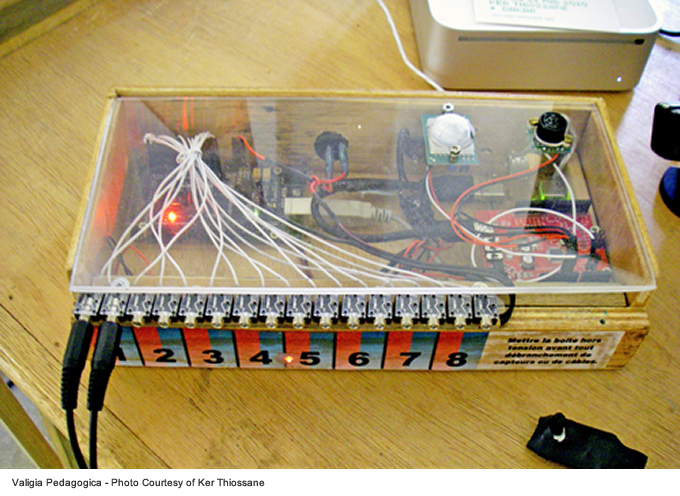 Claudia D’Alonzo: Arduino is the technological soul of the project, as well as several open source softwares like Pure Data. All these components apply to a wide and versatile range of uses, but they are based on a very advanced technology. This aspect implies a specialized training. How does the suitcase solve this issue?

Iolanda Pensa: Of course, they may appear difficult to use. We always consider difficult to use things we don’t know, after all. We have introduced the Pedagogical Suitcase through pictures of Senegalese children writing with a piece of chalk on their blackboards. Such an image makes us think of African schools situation, but children are writing code strings. Pure Data, just like English, is a language, but electronics and programming are not thought at elementary school. Hopefully, things will change in the future, and maybe in Africa things will change faster than in Italy.

The latter way is what experts are experiencing in Dakar, and it takes training on specific languages and time to go from exercises to a creative use of the suitcase. 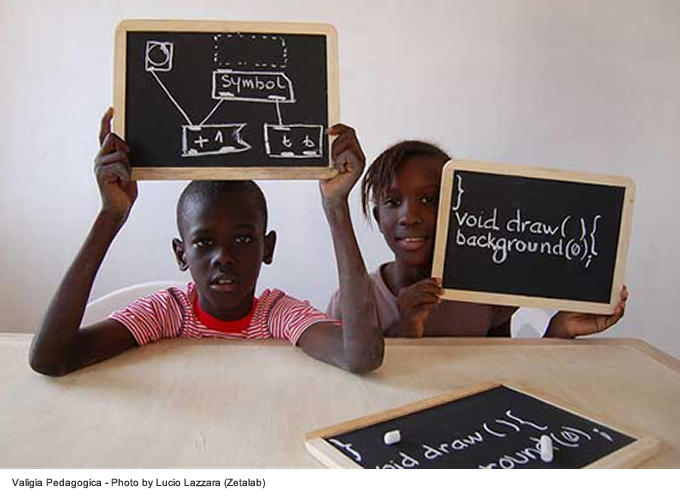 Claudia D’Alonzo: During the meeting at Festivaletteratura in Mantua, in addition to theValigia pedagogica (Pedagogical Suitcase), further technological tools and their application to education were introduced. Among these, there were tool made by IBM and Olivetti. This meeting was a mixture between open design and industrial and technological key brands. What’s the potential of this synergy especially in the field of training?

Iolanda Pensa: Festivaletteratura in Mantua is a new stage of Mobile A2K. The three seminars organized by lettera27 huring the festival represent three chances to imagine and reflect on Africa, education and technology; the tools play a key role. The programme brings together authors, researchers, inventors an then inventions. Anyway, the most known and important technological discovery of the last millennia is the book and Festivaletteratura doesn’t forget it and always tries to enhance it. There is no use in making a difference between open design and brands, and between profit and non-profit. Open source developed from profit or non-profitmaking individuals and societies. But important non-open source educational tools exist too. Mobile A2K aims to bring together resources, interfaces and contents. Technological tools are part of such resources.

During the first meeting of Mobile A2K at the Rockefeller Center, we involved representatives from Negroponte’s OLPC – One Laptop per Child, the telecommunications operator Orange, the Wikimedia Foundation, and developers from Kenya and Uganda; in Mantua were hosted Mobi3, an IBM project, Olivetti Oliboard, Arduino, Afriradio and Wikipedia. During the different phases of its project, Mobile A2K connects such resources with experts, creative authors and African organizations in order to create and imagine “itinerant” educational tools – tools which adapt to different contexts and contents. It is plain to see that thanks to its open and adaptable nature, open source technology gets off on the right foot.