As we adapt to the present day conditions of our digital world, we also change the way we perceive art. These days, anyone can easily take a look at exhibitions by the click of a button or tap of a screen; and access museum and gallery websites.

Equally, the physical presence of a work of art on display in any given location is becoming increasingly secondary in light of the global circulation of reproductions. How do exhibition venues deal with this tendency towards dematerialization? Can the expectations placed upon an exhibition be entirely satisfied if its content is transferred into a virtual archive?

L’Exposition Imaginaire seeks to answer these questions in a variety of formats. The name of this exhibition derives from the famous Imaginary Museum that was invented by André Malraux in 1947. For this project, the writer and one-time French Minister of Culture gathered together photographs of sculptures from various different eras and cultures to create a “museum without walls.” His book project, entitled “Le Musée imaginaire de la sculpture mondiale”, did not aim to be an encyclopedia but was instead interested in having artworks from various eras and countries of origin encounter one another in the form of a visual dialogue. 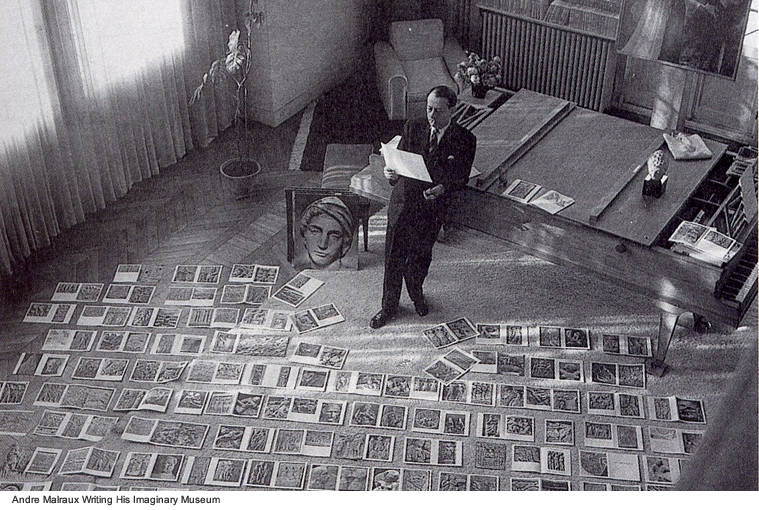 Central to this series of publications was a comparative look at art objects, the discovery of selfsame motifs informing the histories of art everywhere and the unique evolution of a visual language. The virtual museum in the shape of a book made possible the creation of ever-new combinations, as the act of walking through exhibition spaces was replaced by the turning of pages. Such a museum is an archive and a storehouse of knowledge, but, above all, it is a cabinet of wonders that compiles what as such would never have come into contact with one another. With this move, Malraux anticipated a development that by now has become a matter of course.

Today, the internet has taken on the task of making representations of artworks, videos and virtual gallery visits available at all times and everywhere. Is this the beginning of the end of the exhibition? Or the start of a new beginning—of an entirely new exhibition format? For a long time now, those interested in art have looked at exhibitions not just by visiting museums and galleries in person. Instead, they have been consulting online platforms such as Contemporary Art Daily, watching video works on Vimeo (e.g., Oliver Laric, Versions, 2010) and retrieving information online. Yet the experience of an artwork encountered through such secondary media is by no means a recent development.

Long before the introduction of the internet, there were books and magazines, travel guides and (later) television channels that presented art without binding people to a particular location. This is why Kunsthalle Wien—an institution without a permanent collection of its own, committed to designing exhibitions and festivals in a variety of discursive formats—asks whether, and if so how, the design of exhibitions has changed and in what ways the institution itself is now compelled to change.

L’Exposition Imaginaire presents lectures, talks and discussions featuring artists, art historians, architects and scholars that will take place live in the exhibition space, or broadcast through the format of a video projection. A film collage will also comprise part of the exhibition, visualizing aspects of the debate on the dematerialization of art and its reception. The video format will integrate a selection of cuts from various conversations or lectures, so as to successively amplify the range of topics addressed and to help us identify the prospects, and limits, of the digitalization of art.