Saturation is an exhibition showing three works of the artist-in-residency Matthew Biederman. The first one is Perspection, created in collaboration with Pierce Warnecke. The project is an audio-visual installation that explores the viewer’s perception through the use of optical and audio illusions. Apart from Perspection, Biederman is also exhibiting his solo projects R+G+B and Subtracting Color.

Perspection is an audio-visual installation exploring the perception of space through the use of projection on a series of specifically oriented projection surfaces and spatialized audio. Trompe l’oiel has been used throughout history in order to transport the viewer outside their physical location in the same way that contemporary CGI and virtual reality propose experiences outside one’s body or the virtual transportation of the viewer through technology. 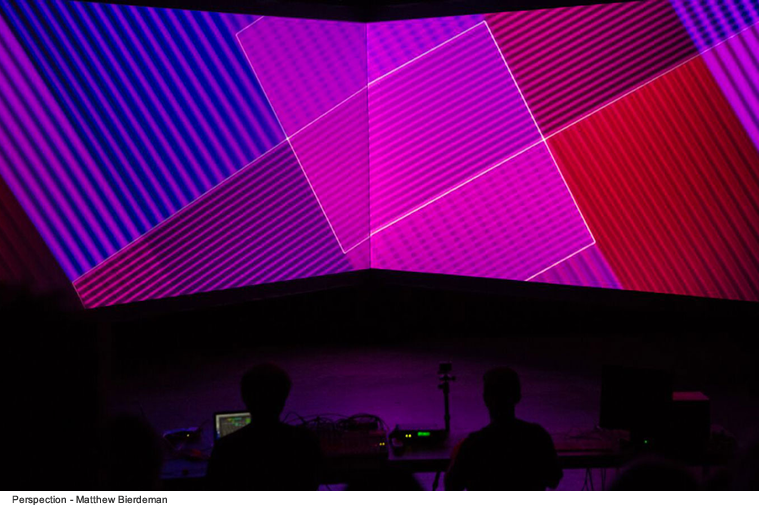 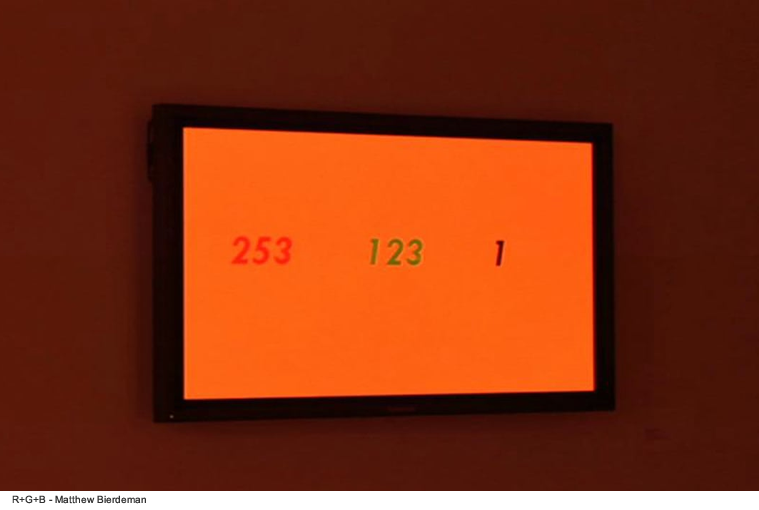 Perspection examines the soundimage relationships from synchronicity to independence of visual and sonic cues of perception through a series of generative audio-visual compositions. Through the use of multistable imagery and sonics the barrier between the physical and screen spaces are modulated between distinct and blurred, heightening the act of perception.

Subtracting Color is a single channel video installation. By stacking gels, color is subtracted from white until there is only black. The process is then repeated with a different set of colors until a full set of gels are exhausted.

R+G+B is a cyclical display of the trichromatic system which defines the world of our digital displays. Systems have been employed in color classification systems since Goethe and Newton attempted to map and explain color relationships. In digital contexts, colors are represented and quantified with specific numeric values for the first time rather than descriptive names. In this work, one one’s visual perception and linguistic representation of color is challenged – when does red become orange? And orange, yellow? And yellow, green?

Is artworks across media and milieus, architectures and systems, communities and continents since 1990. He creates works that utilize light, space and sound to reflect on the intricacies of perception mediated through digital technologies through installations, screen-based work and performance. Since 2008 he is a co-author of Arctic Perspective Initiative, dedicated to augmenting traditional knowledge through new technologies for greater autonomy of the circumpolar region.

Pierce Warnecke is a sound and video artist from California. He is currently residing in Spain after living in Berlin and France for 10 years. Recent projects include collaborations with Frank Bretschneider (visuals for his latest work “Sinn+Form” on raster-noton). In addition to artistic works, he co-curates Emitter Micro festival and label with Kris Limbach in Berlin.