A new light installation by Carsten Nicolai in Berlin

Works by Carsten Nicolai (*1965 in Karl-Marx-Stadt, now Chemnitz) oscillate around the interfaces between art and science. He often explores sensory impressions and their (media-based) translation, with transmitters and receivers, classification systems and their breakpoints. Nicolai investigates intangible phenomena that give rise to fundamental questions about human consciousness—such as how much of what we perceive exists beyond our perceptions and to what extent it is constructed by the neural networks in our brains.

Inspired by themes usually associated with neurobiology and other natural sciences, which relate to the study of micro and macrosystems, his objects and installations result from a process of distillation and reduction. He created the light installation tele for the first exhibition space in the Berlinische Galerie. It alludes to a peculiar property of quantum entanglement.

The phenomenon whereby two quantum systems that are widely separate in space share the same condition was described by Albert Einstein as spukhafte Fernwirkung: the two particles are so interconnected that any change in one has a direct, instantaneous effect on the state of the other, as if there were some telepathic link between them. 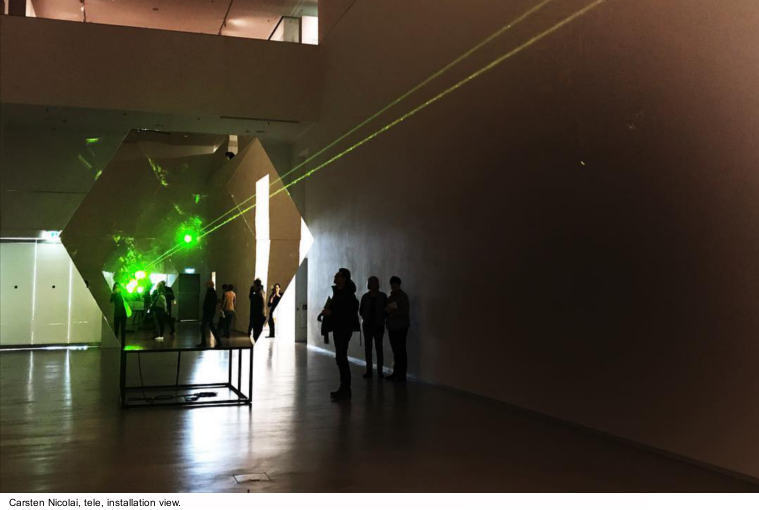 The two mirror sculptures nearly three metres high, which resemble an Archimedean solid split in two, appear to communicate in equally eerie ways: laser beams flow back and forth between them, and as they hit the photocells they trigger new impulses which constantly replenish the beams. Nicolai builds here on a long-standing interest in self-perpetuating systems which, once they have been designed and set in motion, function without the need for any further intervention by the artist.

Although light is immaterial, these laser beams dominate and define the exhibition space. Because electromagnetic waves spread at the speed of light, they are perceived by the human eye as continuous, straight rays, and this lends them a sculptural quality. The mirrors make it look as though the rays carry on into infinity, hinting at another universe, an autonomous system created by the artist.

Our ability to see the laser beams varies according to where we stand. Besides, changing perspectives on the sculpted mirrors generate a plethora of images. Nicolai’s intervention tele makes us think about how we perceive: “You have to first perceive percipience in order to speak of perception at all.” (Heinz von Foerster, 1989) 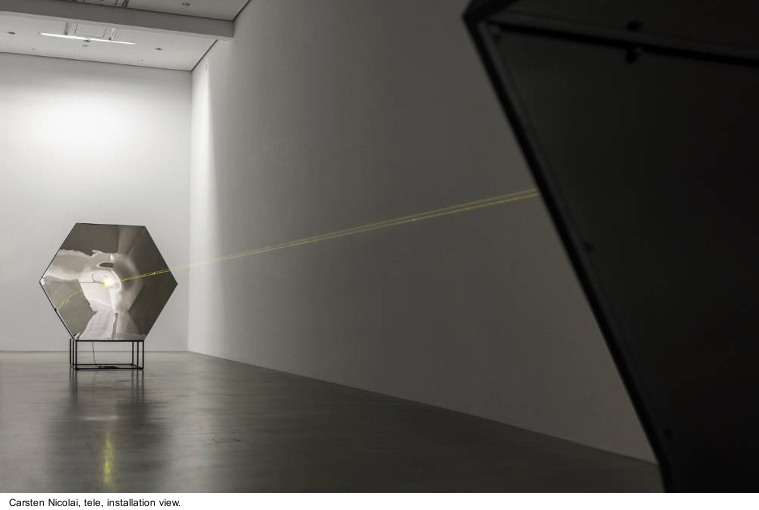 Carsten Nicolai has been accustomed to interdisciplinary working and thinking ever since he studied landscape architecture in Dresden. His course combined specialist knowledge from ecology, mathematics, biology, forest management, communication theory, and town and country planning. He grew up and acquired his early views of art in Chemnitz.

The creative atmosphere in the city, where there was no art college or musical conservatory, was the product of autodidactic approaches applied in all kinds of contexts. Carsten Nicolai began by painting, until a creative crisis in the mid-1990s made him realize that he missed not having a time dimension in his visual works.

It was around then that he began experimenting with high frequencies and the ability of the human ear to perceive them. This introduced him to sound as a material which—rather like the light in tele—is able to transport space and time. His interest in sound has continued, and not merely in his art: he is also active as a musician under the pseudonym Alva Noto and with his own music label. 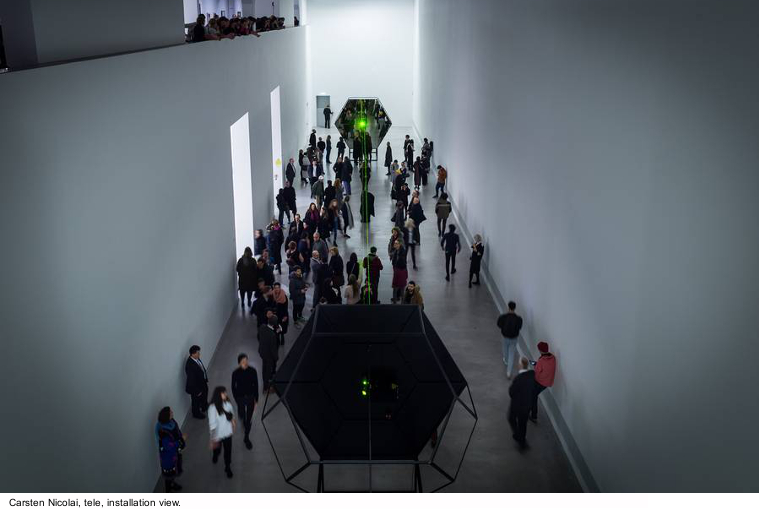 Carsten Nicolai operates across established boundaries between disciplines. Despite his interest in scientific phenomena and issues, it is the ephemerality, process and speculation that fascinate him, rather than the conclusions. This results in alternative models and semiotic systems for thinking about things we cannot describe and for comprehending reality.