Projects 102, part of The Elaine Dannheisser Projects Series, features The Colonies (2016), a custom-built architectonic installation the artist made by hand with a small crew using inexpensive construction materials and techniques.

Within this environment, Beloufa deliberately obstructs and refracts images, diffusing them onto multiple surfaces. By revealing the cables and cords in his works and looping in images of viewers through closed-circuit television, he makes technology visible and incorporates the spectator as both participant in and producer of surveillance culture. 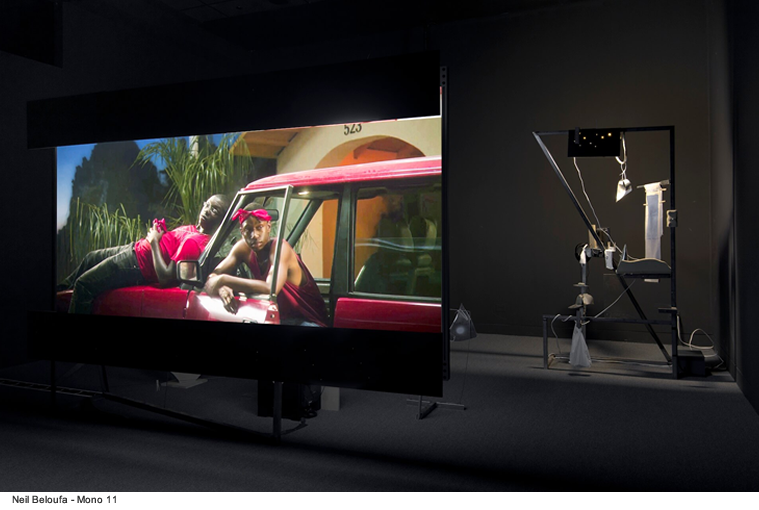 The video at the center of the presentation, People’s passion, lifestyle, beautiful wine, gigantic glass towers, all surrounded by water (2011), features a group of people in an unnamed city enthusiastically describing their fantasy of bourgeois urban culture. Beloufa works collaboratively, and in this instance he teamed up with the actors to generate scripts that imitate such popular genres as the infomercial and science fiction.

He has repurposed this video in different custom-built environments, installing it at MoMA with a view of Midtown Manhattan. Combining onscreen fantasies with the real world of galleries in which he places his works, Beloufa insists his “work isn’t the actual object but the relations I have built with it.”

Beloufa is a French Algerian artist who received his Visual Arts National Diploma at École Nationale Supérieure des Beaux-Arts, Paris (2007), and studied at Cooper Union, New York, and CalArts, Valencia, California. He has had solo exhibitions at institutions including the Schinkel Pavillon, Berlin (2015); the Stiftung Wilhelm Lehmbruck Museum, Duisburg, Germany (2015); La Casa Encendida, Madrid (2015); The Banff Centre, Canada (2014); ICA, London (2014); UCLA Hammer Museum, Los Angeles (2013); and Palais de Tokyo, Paris (2012). He has also been included in major group exhibitions such as the Paris Triennale (2012), the 55th Venice Biennale (2013), the Lyon Biennale (2013), Fruits de La Passion at the Centre Pompidou (2013), and the Taipei Biennial (2014). Locally, his work has been shown at Anthology Film Archives, the New Museum, SculptureCenter, and WhiteBox, among other venues.