His special focus is “applied creativity” (as he describes it), which seeks innovative applications through combinations of art and technology responding to social needs. Drawing on his wide perspective on creative culture, Ogawa also teaches at the University of Art and Design Linz (Kunstuniversität Linz). In addition, he has collaborated with many enterprises and research institutes to bring forth a new vision of the future in art, technology and society.

Ogawa co-founded h.o, an artist group based in Linz, Tokyo and Osaka. He is one of the group’s representatives and its Artistic Director. Each member has a specialized field, such as sensor technologies, database system, interaction design, hardware design and robotics. One of their peculiarities is that they created poetic and playful interactive installations with a very peculiar Japanese trait. One of the recurring themes of the studio h.o could be described as “sensing the invisible”. For example, Ogawa tries to render Time tangible, giving an haptic and visible dimensions to Time through interactive installations as he did with Perfect Time (2005). 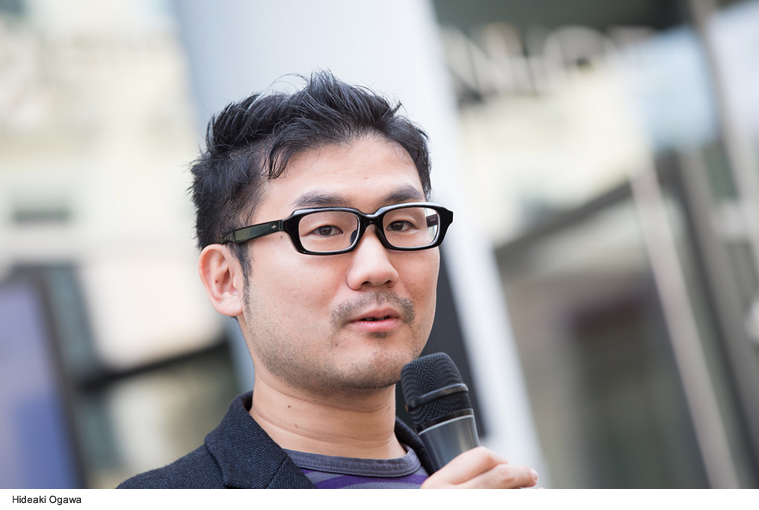 Ogawa follows the vision of Hiroshi Ishii, whom founded the Tangible Media Group in 1995 at MIT Media lab (Massachusetts Institute of Technology). Tangible Bits is how Ishii interprets Human Computer Interaction (HCI): Tangible Bits seeks to give physical form to digital information, seamlessly coupling the dual worlds of bits and atoms. Ogawa created the installation Kazamidori (2009) in order to “sense the bits”; the direction, intensity and geographical location (point of departure) of the social networks’ flow are rendered visible through a weathervane.

Ogawa does not only seek the seamless coupling between physical objects and virtual data, but he shows also the idiosyncrasies of the world wide web. In his work entitled Asterisk (Small Disconnection, 2011) it is also possible to find elements pertinent to Japanese culture, specifically to Shinto, the original form of belief of the Japanese people.

The starting point for the work has been a quite curious fact: in a Google search, the asterisk “*” does not provide any results. The studio h.o developed the idea of creating an installation where the visitors could compose figures on the walls of the exhibition space using asterisks. This has been inspired by the “ema”, small wooden plaques on which Shinto worshippers write their prayers or wishes. The “ema” are then left hanging up at the shrine, where the “kami” (spirits or gods) are believed to receive them. 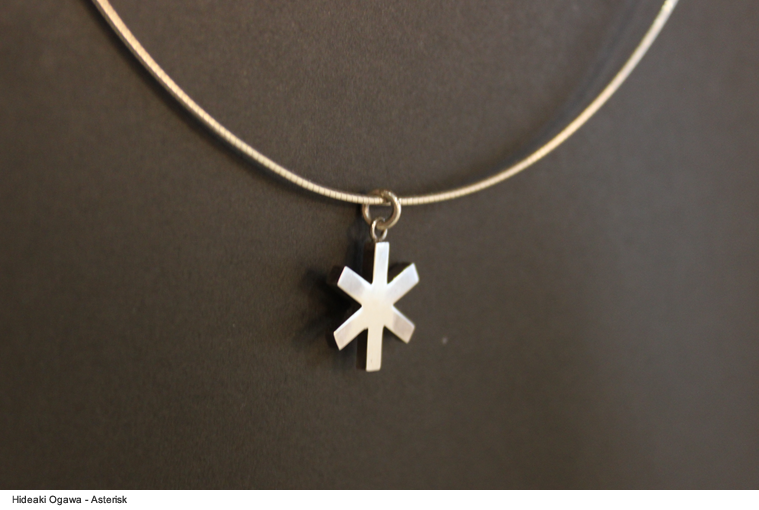 Then, at the art gallery, asterisks are arranged to form the image of a deer, in Japanese Shintoism, the deer is believed to be a messenger to the gods. A necklace, in the shape of an asterisk, is also displayed at the venue. It resembles an “omamori”, which is a Japanese amulet (charm, talisman) commonly sold at religious sites and dedicated to particular Shinto deities, and it is said to provide various forms of luck or protection. This amulet, specifically, shall protect its carrier from too much trivial knowledge, which could deteriorate the mystical powers of the person.

I met Hideaki Ogawa and we spoke how the media ecosystem is shaped, which is the relationship between fine art & product design, how are perceived the Virtual Reality and the Augmented Reality, if we find traces of ancient traditions in today’s technological gadgets. This is his opinion on the current situation in Japan.

“As a premise, I shall say that the globalization, including the Internet technology, allows people to access an overwhelming amount of information, from all over the world.  As metaphor: I might say that our cultural situation (Japan) is like the Galapagos: many people have interest in the unique ecosystem of the culture of Japan.  Moreover, Japanese culture is not just appealing for its form, let’s say… in virtue of an esthetics’ attraction, but also as functional and philosophical beauty, which all people can understand intuitively. So, in a way, I believe that Japan is on the forefront of new social trends but, at the same time, basically we are not pushing our culture from within as being “on the edge of the latest trends”. I am aware that this may sound naïve but… I may say that we are humbler”.

“In my opinion – says Hideaki Ogawa – the good thing is, in this globalized environment: whatever we do, whichever “sign” we draw… it always and seemingly automatically spreads through the web. I would like to make a remark: “who is the trend setter?” Probably, Japan’s latest creative outcome is being edited and presented nicely abroad… by non-Japanese people who have fallen in love for Japan!

I feel that this point is crucial, you see: our cultural products are often marketed abroad by foreigners; possibly, the Japanese mentality and worldview fits to the modern thoughts’ trend. Seemingly, think about how the USA has been promoted inland and abroad, establishing the country itself in the creative field; many Americans and non-American creative people participated in this process”.

“I feel that this is done not only through the effort of individuals or by the corporations and governments – tells Hideaki Ogawa – I think that the cultural artifacts, which might be a movie as well as a gadget, bare a value in themselves. These “objects” may conceal a meaning, which ignites a course of actions. I think that this might be the case of Japanese cultural outcome. In fact, I definitely think that the entertainment industry and the media arts are shaping from within the collective imagination and the collective identity of Japan. …and I firmly believe that the roots can be traced back to ancient traditions of our country. 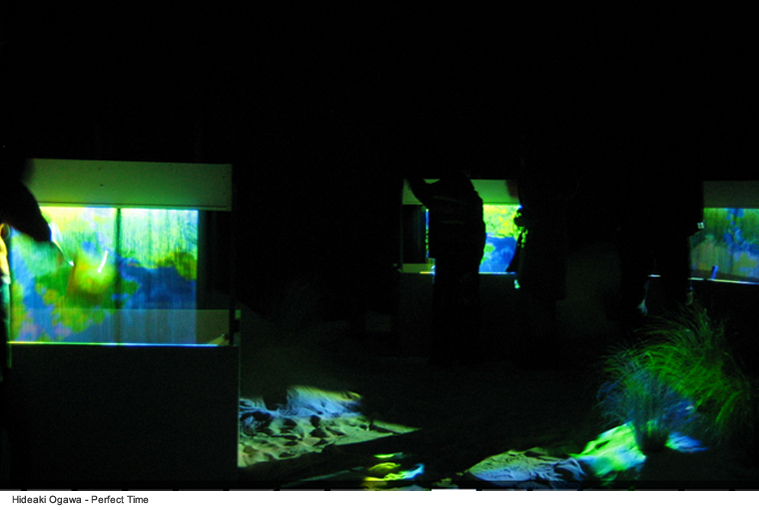 A lot has been written recently about Japanese people spending more time in “virtual worlds” than in the “real world”. Well, on this regard, I think that this not just a peculiar behavior of the Japanese. To put in other words: people who are using the Internet and computers, essentially, they spend their time “there”.

What interests me is to discover and to acknowledge is that the type of services differs in each and every culture. For anyone interested in gaining a deeper understanding of the Japanese ecosystem of media, I suggest to read “Ecosystem of Architectures: How Japanese Information Environment has been constructed” by Satoshi Hamano“.

“I would like to remark- adds the Japanese artist – that, regarding reality versus virtual worlds, I do not think that everybody in Japan are using a creative power to escape from the “real world”; we do not have any separations… in a sense of Duality. Rather, the social system of Japan, as a country, is facing a fundamental issue: how people want to use their time and… ultimately, how do they want to lead their life. Of course the new technologies affect behaviors and modes of actions but it is not about a loss of identity in the factual world and the creation of fictitious identities online. I would believe that creativity is the essence of human beings. It is not enacted from escaping the pressure, but rather for searching for solutions against the current situation, even though it is often done unconsciously. 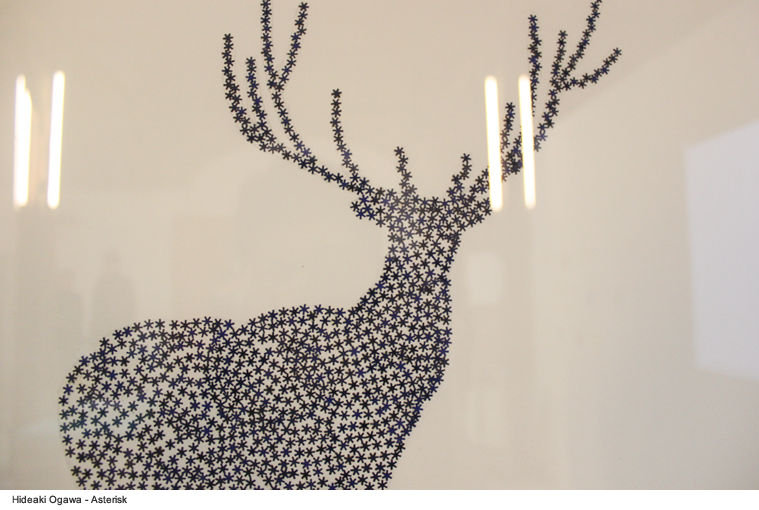 Mauro, sometime ago, you made a curious statement: if, in ancient times, the shaman asked for enhanced senses (supernatural powers to be bestowed on him from the spirits on behalf of Nature itself) could we think that, nowadays, the artist/scientist ask for the same powers to the computers instead? Well, I agree with you; we tend to create something in order to communicate with “something else”, which is invisible. I am aware of the fact that I am going to make a quite bold statement: the (Christian) church was a kind of Google of the ancient times; an institution made for trying to know about the perceived chaotic World. Now, based on the current situation of the World and the technologies we have at our disposal, we artists are trying to create a new tool to communicate with this energy. As the religion had designed the interface as a ceremony (the interface to the god is the ceremony), we are designing the interfaces to enable us to turn ideas into something tangible.

So, I agree with you when you say that it is possible to refer to computers, games-console and mobile phones as the contemporary “torimono” (the place where the “kami” resides momentarily; “kami” are the spirits that are worshipped in the religion of Shinto). Said so, we have to be careful to separate the content channeled through the media and the platform itself. What I mean with this is: manga, anime, games and media art are not creating another form of reality for everybody to escape into.

“What is now perceived as a conventional type of expression, like Anime – concludes Hideaki Ogawa –  it is just content expressed via TV or screens (pcs, tablets, smartphones) …but, we are influenced by the form of the media implied. Every platform brings, so to say, its peculiar way of accessing the content: it shapes our behaviors and “action modes”. The way the platform is structured modifies the way we search, get, absorb and manipulate the content. I am thinking about Hatsune Miku… this is an interesting reference to imagine how much we could experiment further to attain new forms of… platforms.

Talking about the avatars and virtual idols, if we could be free from our bodies, totally: then this would be the time for the rise of the next generation… like in the manga-anime Ghost in the Shell. Actually, nowadays, technology is far from perfection.  We are, surprisingly, relying on the real and physical boundaries because we still have our… shell”.