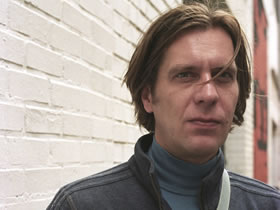 Christian Fennesz is an atypical character of the electronic contemporary music universe. Anti-star per excellence, shy and reserved as his music, Fennesz has obtained during the last ten years international fame and prestige in a world sometimes too mean of sensitive and eclectic artists.

His past of punk guitarist gave him the opportunity to unite the acid and distort sound of his guitar with glitch and noises made with his laptop, with a maniacal cure of details and perspectives, in an elegant and powerful key, tough always sensitive to the border between experimentation and electric blinking. With his début album from 1997 by the label Mego, Hotel Parallel , he pointed the way to the electro glitch music of the last decade. He then produced Plus forty seven degrees 56′ 37″ minus sixteen degrees 51′ 08″ (Touch Records) and Field Recordings 1995:2002 , without forgetting the six hands masterworks Magic Sound of Fenn O’ Berg and The Return of Fenn O’Berg , by Mego, with his fellows Jim O’ rourke and Peter Rehberg . Up to his last work called Venice from 2004, who tested the border of the audiovisual synesthesia, trying to unite the emotions arouse by the music and the dream and alienating images of the Venice waters, never so shy end seductive.

This brought Fennesz to an upper level of research and analysis research, always attentive to what is going on around him. Talking about a collaboration with monster such as David Sylvian and Ryuichi Sakamoto or talking about a meticulous research and inspiration work of what forms the music, from Brian Eno to the post rock going through Merzbow and I don’t know who else, he has to understand if his music can marry with video.

So, while many workers accuse the electro glitch music to be boring, a growing number of musicians discover the contamination between laptop and electro-acoustic. So does Richard Fennesz, who seems pointing the road. Venice has the aspect of a transition work. Probably that type of sound will evolve, maybe thanks to his friend David Sylvian . At that point it will be interesting to here with attention

Marco Mancuso: Christian, how did you get in touch with music?

Christian Fennesz: I started when I was 15 playing the guitar in a punk band but I used to already experiment back then. I would record guitar sounds over and over on this small recorder so as to obtain a whole new sound. At about 20 I was playing in a rock band and then I started both studying to become a sound engineer and a parallel soloist career.

Marco Mancuso: So, as many other electro musicians, you went through the punk. Is it an obliged path?

Christian Fennesz: Well, by the beginning of the 90s in Vienna rock and punk had become two extremely conservative genres, it wasn’t even a question of experimenting and, above all, there didn’t seem to be any possibility to obtain exposure whatsoever nor to overstep the country’s borders. Then techno music arrived and the widespread use of computers allowed everyone to make music by themselves, in their houses. From this point of view electronic music was as much a revolution as punk, even on a social level.

Marco Mancuso: Do you think it is a democratic revolution?

Christian Fennesz: Of course it was. People started to realise they could get rid of thebarriers between the musician and the listener, even thanks to the Internet. And then the huge increase of releases set off the artist’s personality: right in the middle of this melting pot of records, the artist’s identity becomes crucial to emerge from anonymity.

Marco Mancuso: Talking more strictly about music, in your sound noise and melody live together. Wich is the contact point between these elements?

Christian Fennesz: I’ve always been intrigued by noise, it has a great beauty within. What I try to do when I’m playing is to hide a melody behind a sound wall, as though there was a thick curtain between melody and the listener. I leave it up to the latter to try and push the curtain aside to see what’s behind it. I find this a more interesting process than creating a pop song, which I do listen to and appreciate, but it’s not my cup of tea as a musician.

Marco Mancuso: Your last album is called Venice . A non-city, in its being different from all the other metropolis in the world.

Christian Fennesz: When I began to conceive the record, I had in mind something, very European which would recapture in some way the charm of old Europe, a concept ideally suited to a city like Venice. What fascinates me about this city is its singular acoustic aspect. There are no cars, only the sound of water can be heard. Furthermore, its labiyrinthine structure lends itself to a special amplification.

Marco Mancuso: There’s a track of the album, Circassian, in which your shoegazing influences are clear

Christian Fennesz: Sure, a careful listener to my music can hear that kind of sound, but its not a real and proper influence. In the 80s I played the same things as my My Bloody Valentine and I still carry those sounds with me..

Marco Mancuso: About your last album again, how did the collaboration with David Sylvian born?

Christian Fennesz: I’ve always loved his way of making music so I was very pleased when he accepted my proposal to work on ‘A Fire in the Forest’. We have recorded lots of other stuff together, sooner or later I think we’ll bring it out.