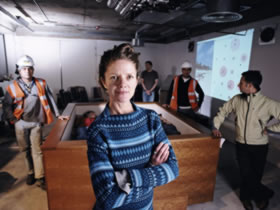 The dynamic aim of Music for bodies is to find a new way of producing and perceiving music. Planned by the artist Kaffe Matthews, a collaborative study tries to explore new projects which are able to develop towards music and architecture, up to furniture and clothing.

Music for bodies makes specific questions: have you never listened to music towards the back? It moves towards the legs, around the arms till the end of the fingersthese questions open a total sensorial winding world. Music doesn’t involve only the auditory side, it uses not only the acoustic space, but it transforms the body from a mean of involving to a mean of auto-spread and perception. Music for the body.

With the analysis of practical studies of the bio-resonance, a direct connection between “the sound map of the body” the space and the music is created in order to develop not only new forms of experimentation, but also to make the sound more easily accessible for a wider audience.

One of the most interesting and qualifying aspects of the project is the open form of collaboration. The feedback of the professionals coming from different activities and relationship with global/local communities makes music for bodies a versatile project and in progress. The results of the multidisciplinary activities are published and invite users and visitors to comment and discus.

Some examples of this activity are the Sonic armchair and Sonic bed. “I was interested for long time in the physical experience of music” with these words Kaffe Matthews introduces Sonic armchair, where there are speaker in the stuffings which wrap up the visitor. To sit on the sound and to be wrapped up by it manages to transform an annoying hearing into an extremely interesting and important experience.

Sonic beds, as the name suggests, transposes to the bed the idea of the sound armchair: they are a relaxing space which encloses the audience. If traditionally bed is linked to the idea of intimacy, for Matthews is instead a potential space where different people can meet each other in the same time. Different versions of Sonic beds take place in different parts of the world ( London , Shangai , Taiwan ) involving the heterogeneous modalities of relationships among people.

Beyond the sound furniture, music for bodies have at its disposal an open lab to the audience in which they can experiment with their own personal relationship between body and bio resonance. 1 hour sessions for few people allow to register their sensorial responses at the sound in different situations and conditions. It is a personal sound, music in which we can find ourselves.

Luca Bergero: the relationship between sound and furniture can involve many other objects. Do you think to explore new sound opportunities in this section?

Kaffe Matthews: Yes absolutely, with the intention of making new music as well as new objects to experience it from. This is the whole intention of the collaborative project music for bodies that I launched last year. In fact right now I had imagined that we would have made some sonic foot stools, sofa and launderette sonic waiting bench by now for example, with a sonic fashion show in production for the spring, but the Sonic Bed building around the world is pretty time consuming. I am also coming to understand how much such a new way of making and experiencing music, ie. in and for a Sonic Bed for example, changes and opens up ways of composing, so this new object making process will be more drawn out than I had anticipated. Of course, music for bodies is always on the look out for interested and active potential collaborators, so, do get in touch if you are out there..

Luca Bergero: can you describe the bio resonance?

Kaffe Matthews: Bio resonance is a healing practice that, simply put, assess the frequencies at which your cells and therefore organs are vibrating. You could think of it as a Western or technological version of acupuncture. Again, simply put, with Bio Resonance healing, if you are well, your body will be vibrating/resonating/singing in harmony, and if you are sick, the vibrations will be disharmonic. A bio resonance practitioner attempts to assess the organs and frequencies that are out of balance in your body, and put back the frequencies you need to make your body sing ‘in tune’. However, it is a pretty subjective practice from point of view of the practitioner in that their own interpretation of the situation, how you feel, what they need to look for in the first instance, feed directly into the process. Its by no means a straightforward or hard and fast technique of reading and sending frequencies from and into the body via some special connector, and open to much doubt. However, the field of vibrational medicine is a new fascinating and fast growing one, and I’m clear that it “works”.

Luca Bergero: how can the bio resonance be used in the musical production?

Kaffe Matthews: Firstly, these cellular human body vibrations occur at frequencies within the audible range for humans, although at tiny and therefore imperceptible volumes. With the aid of amplifiers and accurate ways of reading these frequencies as they are emitted, it seems that we have some fascinating sound sources. Secondly, working with a B-R practitioner could produce sonic maps of the body that could be used as scores for music for bodies making. This is the aspect we are near to working with.

Luca Bergero: how can music evolve in the physical experience?

Kaffe Matthews: If you mean, how can a music change through experiencing it physically? well i think that is part of the minefield of questions around human perception, and i don’t really have room to discuss that here… But you only have to see the queues of old women and kids waiting for a ride in Sonic Bed or a Sonic Armchair to “listen” to what they might otherwise call noise and certainly not music, to realise that experiencing music as physical sensation that moves and spins around you as you sit or lie, that has a direct and intimate contact with your body , really is a way in to the enjoyment of music. This kind of music making itself then makes other requirements on the composer, so there will be and there is, as I am now discovering, quite an evolution in compositional strategies.

Luca Bergero: Sonic bed is greater than Sonic armchair, it could be a meeting point for people. What do you think of music and social spaces?

Kaffe Matthews: Going to a gig or concert can be and still is not only a fun but a vital and sometimes the only way of enjoying music especially if it is live. Interacting with everyone else’s experience of the event, be it joyous or painful all add. Making a Sonic Bed creates a potentially social space which not only addressed these issues but also offered a very intimate experience and possibly with a stranger. Would people get into Bed with someone they had never met before, and in a public space? In Europe and now Canada, I have found there is no question to this, folk hop in no question, but in China and Taiwan, the responses were quite different, though also related to removing shoes in public.
Its a little like jamming in on the underground though, its rare that Sonic Bed visitors will talk to each other!

Luca Bergero: how much important is the technology in your artistical production?

Kaffe Matthews: Technology is an unquestionalby vital tool in the making of my work and has been for at least 15 years.

Luca Bergero: on your web site it is possible to find a “discussion room”. Is it important the feedback of the visitor for the development of you work?

Kaffe Matthews: Yes. Important to be out of artist and producer ghetto land of studio and performance. Yes, audience/visitor input is a process that slows down theb making initially , takes up time to talk!, but also feeds. eg. The 6 month installation at Rich Mix, London,where passers by could just drop in and join in or hear or witness what we were making at the time certainly exemplified this.