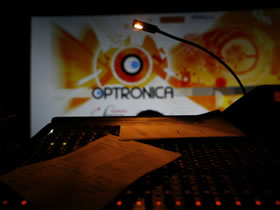 The second edition of Optronica took place in London from 14th to 19th March, in the restructured National Film Theatre Complex, opened with the name of BFI Southbank and in the incredible IMax Cinema , near the first one. This edition confirmed the British festival as an not to be missed appointment for the lovers of Live Media and Live Cinema, and as meeting for the experts of the sector.

The festival was at its second edition, thanks to the collaboration between British Film Institute , the artists and audio-visual producers Addictive TV and the association Cinefeel . The choice of BFI as location completely met the performance exigencies of the selected projects, followed by a vast public comfortably seated in two cinematographic rooms inside the building.

Optronica is one of the few festival in the UK that is completely dedicated to the new audio-visual languages and their different exceptions, from experimental to entertainment live media, that find place in clubs after the closing of the festival at the Institute of Contemporary Art , with the shows of Exceeda, Addictive TV, Speedy J &Scott Pagano . Lots the artistic moments, a note goes to the Spanish collective Reactable , that presented with a one hour live the possibilities of use of their interactive sound table, the new projects of a/v live of the British duo Semiconductor and the Berliner duo Rechenzentrum , and the always indescribable performance of the Japanese artist Ryoichi Kurokawa , saw in Italy only at the Mixed Media 2006 festival in Milan.

The real wealth of this festival has been the attention for the reflection and discussion moments about this kind of artistic expressions and about the necessity to individuate a historical path inside the a/v communication history and to position this new form of expression as continuum of the old research path of the visual culture. One of the most important moment in this sense has been the intervention of Cindy Keefer, of the Los Angeles CVM , with her talk on the visual music history and its distant origins. You can read her interview in this number.

We talked about the festival with Francoise Lamy , artistic director of Optronica, founder and curator of the Association Cinefeel .

Silvia Bianchi & Marco Mancuso: Making a balance of the second edition of the Festival, how was the answer from the public and from the artists?

Francoise Lamy: We’ve had nothing but great feed back from both audiences and artists alike. We been quite surprised by the volume of fantastic emails, particularly from the artists saying it was one of the best festival experiences they’ve ever had, which is a great thing to hear after all the hard work that goes into running a festival. We’ve also had great feed back from many of the partners, like the Arts Council of England and even many of the cultural institutions – for example people from the Japan Foundation actually brought their families down to the particular event that they supported – the Big in Japan programme with a performance by Ry o ichi Kurukawa – and they were over the moon about the whole event.

Silvia Bianchi & Marco Mancuso: What did you find the best part of the festival or the best performative moment and what the worst? If you find it.

Francoise Lamy: There were so many best moments for me! And if there was a weak part of the festival I wouldn’t say!!! But for me the best moment of Optronica 2007 was the talk by Cindy Keefer from the Center for Visual Music , she really gave insight into visual music like I have never seen before; and her talk seemed to connect with people i n such a great way. The brand new shows from Rechenzentrum and Trevor Jackson were also highlight performance s for me, it was brilliant what they did, as too was what the Addictive TV guys did with their film remix set at the IMAX – that went down so well…!! And I guess “the talk of the festival” was the amazing return of EBN, the guys who pretty much invented live AV sampling! I’m sure them getting together again for this one-off come-back gig helped sell-out the club night!! But something that really made me laugh was Exceeda doing a remix of the Phantom of the Opera, changing it into the Phantom of Optronica for the club night , the crowd loved it ! !.

Silvia Bianchi & Marco Mancuso: In these days you reunited in London lots of professionals, curators, critics, reporter and media realities from everywhere. How much is important to be part of an international network and work connected to grow up?

Francoise Lamy: I think it is vitally important in today’s world to be globally connected . At the actual festival, the Optronica Lounge was set up as a place to meet and hang-out and it quickly became a real get together of the international AV scene. Around 20 or so international curators and festival programmers attended Optronica this year and they were especially interested in seeing all the world premiere performances and checking out new UK talent. Some of the artists have already told us they’ve had prospective bookings as a result, which is great.

Something which I would be keen to see happen in the future is festival programmers all working together to co-produce audiovisuals shows – especially as there isn’t a great deal of funding for this new art form, especially here in the UK. Producing such shows can very expensive, especially when you are using new technologies and so on, and this would also help with touring the show in a few countries.

Silvia Bianchi & Marco Mancuso: What’s your opinion about the future of the audio-visual forms of expression, about the performances and the installations inside the festival world, museums of contemporary art but even in commercial circuits, such as Cinema and Design? During Optronica we got in touch with several artists, testers that work in that directions, others that produce at the borders of art, design, music and communication. I think this short-circuit is a strong and powerful element now, isn’t it?

Francoise Lamy: I think it’s clear where this is all going. I think this whole art form will become more mainstream in the future. It’s whole style will begin to influence traditional film and television – particularly advertising; and that’s already begun. But of course it will still remain an art form in it’s own right, working perfectly in galleries and art museums with some artists working in both the art and the commercial worlds. And right here, right now, it’s very exciting to see at Optronica artists with such eclectic and very different backgrounds all heading in the same direction; for example artists like Trevor Jackson who’s a musician and designer, Peter Greenway who’s a film director, Addictive TV who are DJs and VJs but also television producers, Charles Atlas who’s a video artist and ReacTable who are software programmers and musicians all crossing and blurring the borders that you describe between art, music and communication to find themselves all in the live cinema and AV field.

We talk with Addictive TV , creators of the festival, after Optronica to better understand how did they get there.

Silvia Bianchi & Marco Mancuso: What attracts you to working in the live audiovisual realm? Can you say a little bit about your background and how it lead you to this point?

Addictive Tv: It’s the whole concept around the integration of music and images that attracts us to this field. Images are incredibly powerful and can bring out so much more in music. We’ve all got eyes as well as ears, and by being an extension of the audio, the video aspect of visual-music can really help create an amazing response, much more than music can alone. Images always add an extra dimension – why did the likes of the Lumiere brothers or John Logie Baird pioneer film and television and not just be content with radio or gramophones?

Both our backgrounds (Tolly & Graham) are very different; Graham coming from a film & television production history and Tolly’s from being a composer turned DJ/producer. We met during the production of Addictive TV’s visual-music series for Channel 4 called Transambient, Graham was producer of the project and already a VJ in clubland at that point and Tolly wrote music for the show. From there we began to work together more and more, like on DVD projects including Spaced Out and later ITV1’s Mixmasters music series and also developing our live show to become more audiovisual, rather than simply VJ based. The more work we created, the more offers came in to remix films, promos and perform live.

Silvia Bianchi & Marco Mancuso: Can you tell us a bit more about your performance at Optronica? Do you use any modified technology or software in your set-up? What do you think of the advances of AV technology in the last decade and how has it impacted on your art?

Addictive Tv: We’ll be performing a special World Cinema remix set, unveiling new work like an official remix of the forthcoming Japanese anime movie Tekkon Kinkreet. We’re going to start the set though with a special commissioned remix of 70’s gangster flick Get Carter we recently created for the Northern Lights Film Festival in Newcastle where the film was set – we haven’t performed this anywhere else yet. Yes, as well as laptops, we do use modified technology, which we’ve had customised – such as our audiovisual mixer – but we also use brand new technology which isn’t widely available yet too, such as the new second generation Pioneer DVJ-1000 DVD turntables which we’ve helped develop with Pioneer.

AV performance technology has moved on massively in the last ten years, from working with kit that wasn’t designed for performance use – like old television mixers and laser-discs to editing on giant tape-machine-to-tape-machine edit suites. Now, a decade later, thankfully we have powerful laptops and dedicated equipment for AV performance, like DVD turntables and visual synthesizers. The scene has developed to the point where manufacturers feel it’s now worth entering with specific kit for this field.

Silvia Bianchi & Marco Mancuso: Why do you think it’s important for festivals like Optronica to happen?

Addictive Tv: Despite the long history of being on the artistic back burner, this is definitely a new movement now – perhaps the first real movement of the early 21st century – and hardly anyone in the UK , let alone the world, is providing a platform for it. We are now though starting to see events like this slowly spring up all over the planet, let’s hope it continues…!.