The Meaningful Of Meaningless. Joseph Nechvatal’s ethics of noise

Joseph Nechvatal is an American artist who operates in different fields, such as music (with artists from the NY no wave scene and Tellus Audio Cassette Magazine) and media art. He is known for his research work about the possibilities of using virus/software to generate chaos elements within images.

Nechvatal is not just an artist though, he is also a philosopher and professor, and he published many texts. The most complete and organic one is Immersion into Noise [1]. This is a book created after years of study and it reflects the complexity of a way of conceiving art which is not limited to an aesthetic manifesto about one’s way of doing art. His position is proven by in-depth analysis of the different themes tackled throughout the book: this contributes to making this volume a study with scientific substance. However, Immersion into Noise has been somehow unfortunately kept hidden in the philosophical and essayistic panorama.

The systematic in-depth analysis carried on by Nechvatal always emanates from one point of view: an experience and a perception of art which makes the book very personal. From the very first chapter the author starts sketching transversal lines of his concept of noise, by telling his personal experience at a Hendrix’s concert. On that occasion, he was stricken by the guitar feedbacks used by Hendrix as a self-generative device for noisy signals, which created a constantly exceeding, unexpected and uncontrollable climax. On the one hand, the personal experience helps Nechvatal accounting for the perceptual sensation of what is the main characteristic of noise – the excess – and on the other it helps him mediating the system of artistic production of noise: indeterminacy. It is in fact these two features that help to understanding the view of Nechvatal and of the examples that run through the different chapters of Immersion into Noise. 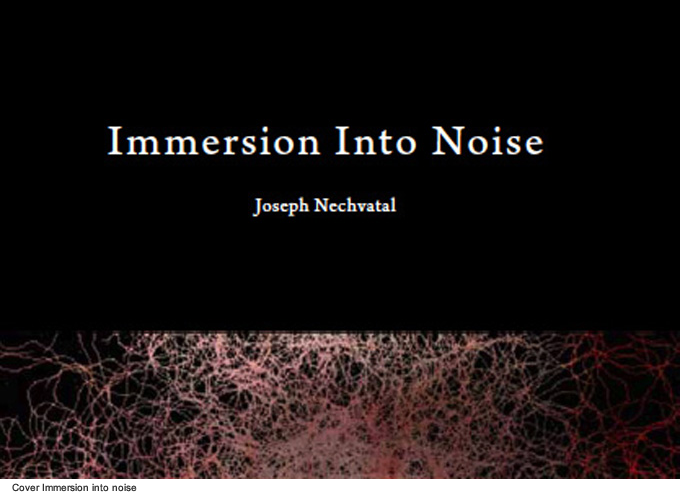 After a thorough analysis of what, in music, determined the appearance of noise, from John Cage to Várese to Russolo, touching Clock DVA and the New York no wave, with Glenn Branca and DNA, two other personal experiences are described: the audiovisual performance Datamatics by Ryoji Ikeda, and Cecil Taylor. Both events have been attended in person, and they are described focusing on the primary and perceptual aspect: the experiential one. These are worlds apart, music on one side, performance art on the other, but the author individuates a common feature: noise as indeterminacy and excess.

The personal experience as a starting point is for Nechvatal not only a way forintroducing relevant biographical data and for using the lived experience as an inception from which he can start discussing conceptual aspects of his discourse. The account of the personal experience is rather essential to the expression of the concepts of noise and Noise Art. In fact, we find the first hand testimony not only in the chapter dedicated to the music, but also in the second, the one connected to vision. In this chapter, the topic is the Lascaux caves, a complex system of caves situated in France, where there are important tokens of Paleolithic mural paintings. This part of the volume, dedicated to the Noise Vision, is interesting to read and it appears fundamental in order to understand the elements of noise that fascinate the author in the realm of the artistic practice. It is in fact by starting from Lascaux that the author arrives to talk about the technique of construction of the labirynth [2] to the sfumato [3], which blurs the contours of renaissance drawing, till the rococò age, in which the excess becomes the immeasurable sign of plenitude, and noise [4]. 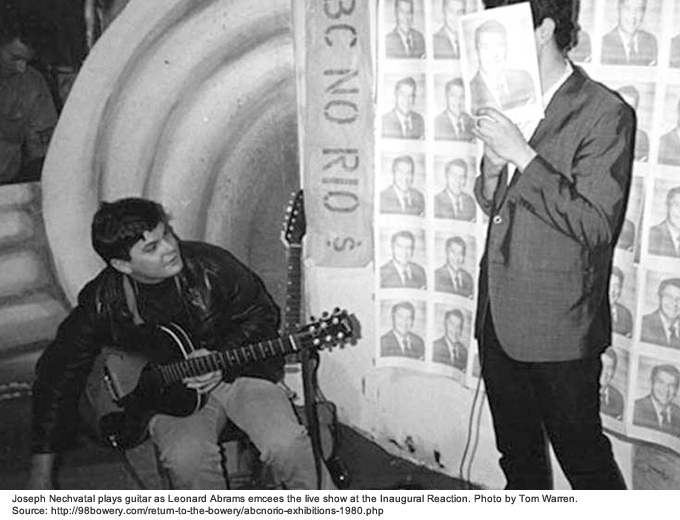 From this point, the reader literally comes into contact with the leading theme of the volume, and with the possibility which, according to Nechvatal, allows noise to open up to different senses, being capable of becoming artistic method, as much as cultural approach. In this way a vast concept is unclosed, which includes the perception of the excess, the notion of the excessive, the indeterminate, and the overflowing; it encompasses also noise art as subversion and resistance towards the flat flux of things, and noise as a possibility of inward investigation.

Noise determines an immersive and absorbing moment, where the intensity of what is perceived pushes outwards the perceiving, and subjecting, subject. It pushes the perceiver out of his “comfort zone”, without letting him lose the perception of himself, as many examples given by the Nechvatal will to demonstrate. It is obvious that it is impossible to try to read the perception of the author as something which can be scientifically proven or objectively rendered. It is something which maybe could be shared; or maybe not.

But the “noisy” topic becomes more and more clearly a way of operating in the realm of the arts, and a device for interpreting arts’ aims and functions. Noisy art is that which triggers an experience, first of all. This experience doesn’t have a definite pattern, it is not linear; rather, it is mannerist: it becomes a message that is not exclusively destined to have one and only interpretation, it is an experience which stays undetermined until the very moment it occurs. The value of the “noisy” lies in the ability of disclosing a creative core towards different possibilities of development, leaving these very possibilities open, as the principle of performing arts suggests. “Noisy” are, in fact, for Nechvatal, all those arts which include performance, from Fluxus and Dick Higgings to Futurism, to radical improvisation to 4’33’’. 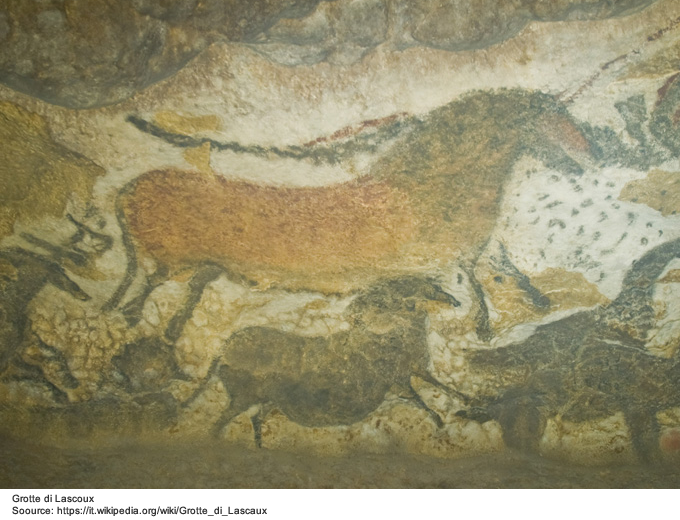 The linearity of the message, of the content, and of the form constitute a limit for Noise Art. As it happens also for the Lascaux Caves, which don’t follow an idea of space which could be considered linear and architectural, but instead labyrinthine, so it goes for noise art: the experience is never clear, taken for granted, abstract, clearly readable. Noise art is always immersive, engaging, blurred, confused – for what concerns logics and rationality – but at the same time it is extremely direct and intrusive towards the subject which emotionally (with body and mind) experiences it.

The lack of an aim and of a predetermined result, in the noisy matter, is what fascinates also, in a different but similar way, the composer Luigi Nono. Nono considers noise as a practice that can open up infinite aesthetic and perceptual possibilities. These possibilities are as infinite as the vibrations which can generate a sound, and that can be sustained by introducing into that very sound elements of disorder, viruses which prevent it from being recognized immediately, blurring its contours. These possibilities, being infinite and potential, become for Nono, and to a certain extent also for Nechvatal, a tool for subversion. [5]

In these terms it can be reasonable to talk of Nechvatal’s thinking as an ethics of noise. He proposes a way for studying its features, and its possibilities, detaching from the artistic evidence, without reaching levels of pure abstraction and conceptualism. The question with which Nechvatal starts his dissertation makes clear the intention of the book, and his general vision about making art: “On a planet that is increasingly technologically linked and globally mediated, how might noises break and re-connect in distinctive and productive within practices located in the world of art and thought?” [6]. This is a question which involves noise from the very beginning without limiting it to the aesthetic or physical realm, although it is from these very fields that noise can be conceptually read as excess or indeterminacy. 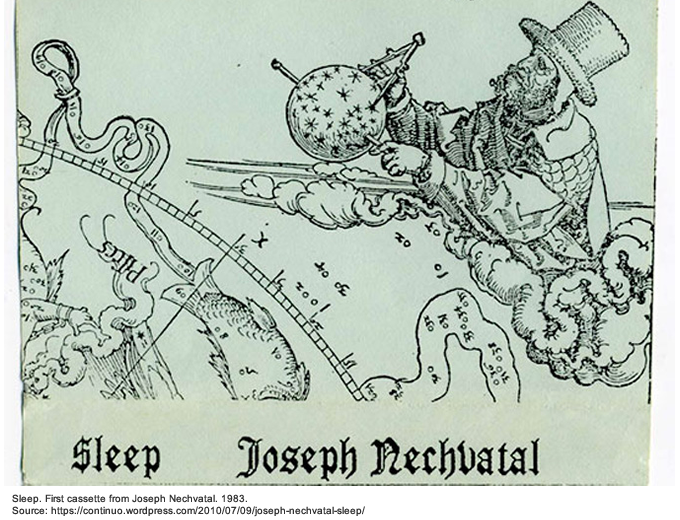 Unlike other studies, such as Paul Hegarty’s Noise/Music. A History[7], which analyzes noise from the aesthetical/musical point of view and its implications, Nechvatal traces a multidisciplinary trajectory linking noise and Noise Art, involving visual, spatial, acoustic, and perceptual elements, showing how this concept relates as much to noise music as to baroque, architecture, web, ending up in discussing ethics and ways of acting in, and reacting to the world, considering the quantity of surrounding information mediated and pre-directed to us.

The value of noise for Nechvatal is not just limited to the critical value of noise art, which gives it shape, but it is also a value inherent to noise itself: “noise as creation itself” [8]. Noise proceeds in a rhizomatic fashion, as Deleuze and Guattari said: “Noise may break some connections, but connections will always continue to grow in other directions, creating new thoughts and new affects.” [9]

For the two French philosophers the importance of the rhizome is that of defining a new way, non-hierarchical, of relating to the generation of meaning. Similarly, in Nechvatal’s noise the connections, which blow up, allow to breach towards new directions of meaning. Deleuze, Guattari, and Derrida, are references which are echoed everywhere in the book, even when not explicitly expressed through quotes or footnotes. A thousand plateaus by Deleuze and Guattari, or Deleuze’s The logic of sense [10], where theoretical and conceptual thinking meet literature, writing, Lewis Carrol, Artaud, and Levi-Strauss to give life to an original interpretation of the theory of sense. 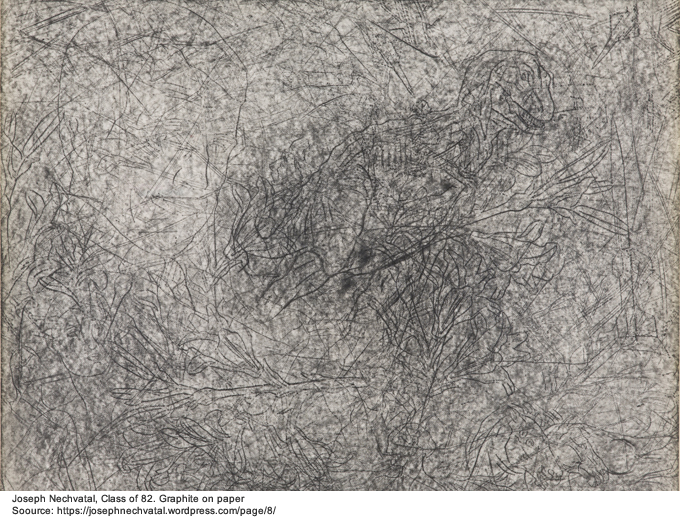 The sense of noise and its ethics involve in first person the subject and his conscience, in a form of expression, a vision, and a way of learning, which trigger the capacity of being “self re-programmable”. It generates a system of references which is dynamic and not fixed within a unidirectional logic, opposing the unilateralism, bringing us out of the comfort zone of our linear and logical perceptions.

“Noise can block, distort or change the meaning of a message in both human and electronic communication. What the art of noise does is to take the meaninglessness of noise and convert it into the meaningful” [11]. As Deleuze asserts in The logic of sense “the non sense has no particular sense; however, it opposes the absence of sense, but not the sense it produces in excess” [12]. It is in this dialectic that Nechvatal’s idea of noise is poised: an element produced in excess, in an uncontrollable way, capable of embracing multiple dimensions of our perception, and of making us part of an authentic relation with our inner world.

It is an excess of meaning capable of opposing the void, stimulating our imagination with intense propelling drives, with suspicions, fears, passions, putting us into contact with that which guides our choices, our intentions, and our actions, also in the political and economical world [13]. 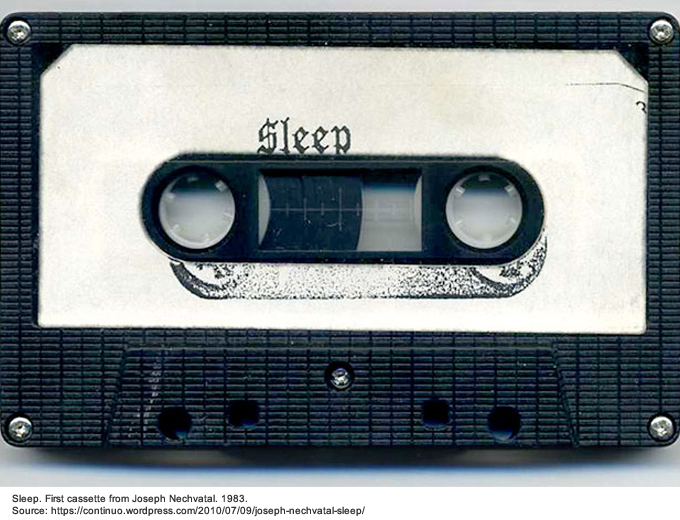 [1] Joseph Nechvatal, Immersion into noise, Open Humanities Press, 2011. The book can be downloaded for free at http://openhumanitiespress.org/Nechvatal_2011_Immersion%20Into%20Noise.pdf

[2] Cfr. ivi, p. 94, The labyrinth is described by the author as a “cultural noise space”, and it involves architecture in his understanding of noise.

[5] Nechvatal never mentions Nono. The parallel seems to be necessary, in the light of a common understanding of the Negative Dialectics by Adorno, and of the synthesis process without end result.

[8] About this generative possibility of noise, and its ethics, is interesting to read VVAA, La musica futurista, Auditorium Edizioni, Milano 2009.