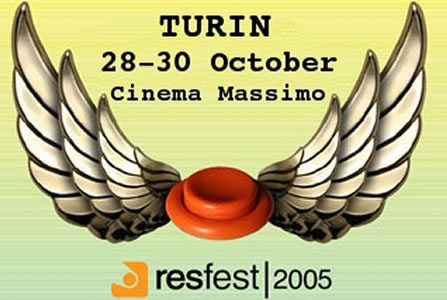 Resfest , the world’s most important festival dedicated to the vanguard of digital cinema and to pushing the boundaries of technological innovation and creativity , comes to Italy for the first time . It will be in Turin from October 28 to 30 , at the National Museum of Cinema’s Cinema Massimo and at Lumiq Studios, thanks to the new Artistic Director of Turin’s VIRTUALITY CONFERENCE, Maria Elena Gutierrez. This traveling event tours over 35 cities on six continents and, in Italy, it precedes Virtuality Conference’s 2005 edition.

An expression of the new urban creativity and a point of reference for the latest generation of filmmakers, breaking new talents and visionary artists, who are revolutionizing the visual language of cinema, Resfest celebrates the creative intersections between innovative film, music, art, fashion, design and technology.

The three-day program includes several areas focusing on a particular language or artistic approach. The Shorts reels, made up of five sections (Shorts 1, Shorts 2, Shorts, 3, By Design and Cut and Paste), are dedicated to short film . One of Resfest’s visually striking displays is the Music Video Programs reel, with the two sections Cinema Electronica and Videos that Rock. Besides short films, every year Resfest screens two or three upcoming features, which mix different languages in clever ways and explore subjects related to such subcultures as the underground music scene. Finally, each year Resfest does a retrospective , which celebrates new cutting edge directors . This year, after talents such as Jonathan Glazer, Spike Jonze and Chris Cunningham, Resfest dedicates its Special program to the award-winning LA-based Scandinavian collective Traktor . For the Turin venue, we will also add a specific section in this international program that showcases the best of Italian production. For this special section, called ITALIANMIX , we launched a call for works (the guidelines and entry form can be downloaded on our website) which has been very successful: even though the information was released just a few days ago, we have already received innovative and interesting submissions. Besides screenings, Resfest will be also a unique opportunity to meet some of the protagonists of the international artistic scene. In fact, we have been keeping in touch with some of the digital cinema’s main personalities, in order to invite them to Turin during Resfest, such as the Academy Award Winning Michel Gondry, a visionary talent in special effects and new technologies, who is well known for his cutting edge music videos.

Resfest is not only a festival of digital images: it also shows in real time the changes that digital technologies are making on art (and on every day life). That’s why Resfest also showcases a parallel section, hosted by each venues’ most glamorous clubs, centered on exhibitions of images and live music. In this way, the festival comes off the screen and infects the audience, enlivening parties which become the measure of our times. This section is made up of the performances given by artists belonging to music or visual collectives, organized around important brands such as, for example, Warp (one of the festival’s partners, and the label releasing Chris Cunningham), XL Recordings, Mute record, or Kitty Yo. Music labels are included which deal with this no man’s land occupied by dj and vj sets, new electronics, innovative sounds and ancient experimenters.