MIRA 2013. Among mapping, music and research 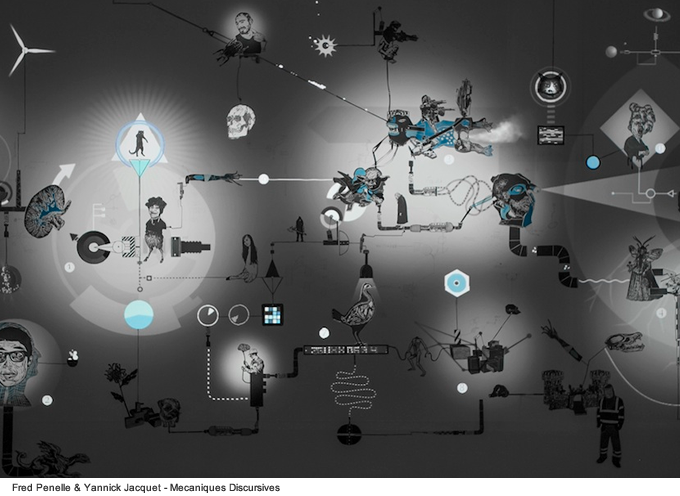 Last November, from 14th to 16th, the third edition of MIRA, Music and Visual Arts Festival, took place in Barcelona. Goals, ideas and ambitions of MIRA 2013 have clearly grown and matured, if compared with the previous editions.

The festival focused on an accurate and high quality program, aimed to encourage not only the sensitivity of the experimental music lovers, but also and especially the feelings of many artists, creators and researchers, who were attracted by the world of audiovisual creativity.

This year to the magnificent industrial spaces of Fabra i Coats, headquarter of MIRA Festival, other locations were added, like the Razzmatazz club, venue for the last concerts of MIRA Club on Saturday 16th of November, and the white and bright rooms of the CCCB (Center for Contemporary Culture of Barcelona) Theatre. It’s situated in the central district of Raval, where the first edition of MIRA Lab took place. 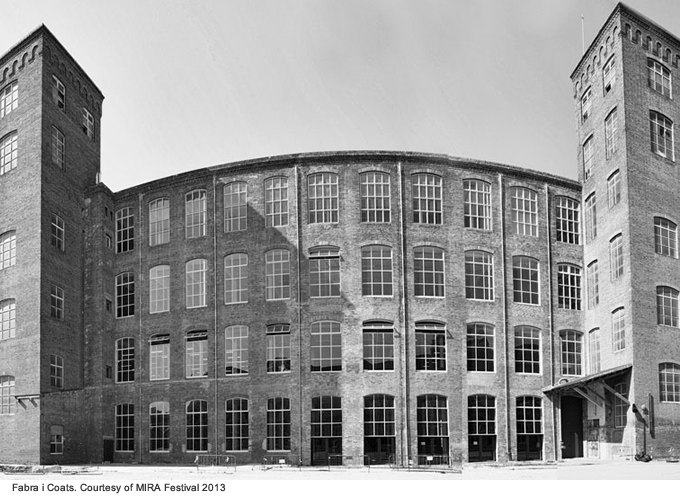 Research and Education. The Mira Lab

One of the greatest innovations of this edition consists in MIRA Lab program, that’s conceived as a space for research, education, presentation and sharing of projects. The Lab enhances and increases the quality and the variety of the festival, emphasizing several theoretical and practical aspects, that combine art and technology.

As the promoters said: “The MIRA Lab is an international event for artists, programmers, curators, communication agencies and audience, that work with the creative technology. (…) It’s a festival for artists that are involved to new ways and new relationships between the live music and the visual arts; for technical and creative programmers; for architects and designers of interactive installations; for communication agencies; for students, universities, institutions, curators and cultural centers that are linked to the new media field.”

It is a very ambitious project, aiming at different professional profiles with the primary purpose to promote the cross exchange of skills, ideas and experiences. Three days of activities were divided in three different themes: Space & Projection, Creative Programming, Interaction.

The contents of the three different days turned around these main themes. Through workshops, conferences, debates etc., some concrete technologies and specific concepts have been discussed, analysed and put into practice. 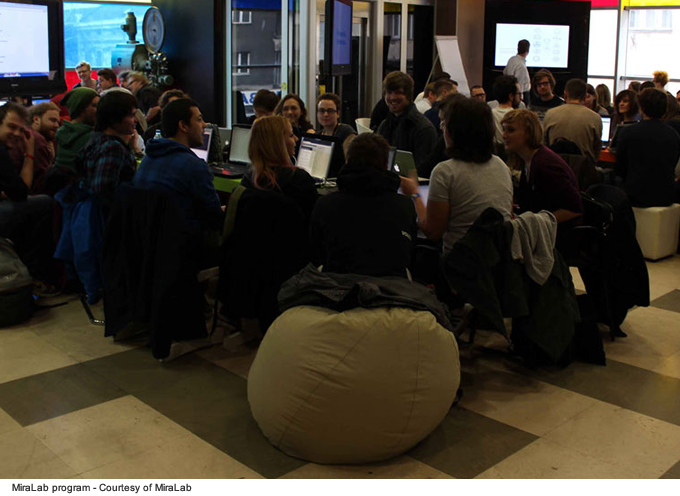 A detailed list of the discussed contents may be useful for experts:

The Lab formula and the choice of contents were certainly smart insights. The artistic and technologic production, the exchange of experiences and visions, the creation of a network of shared knowledge, the theoretical analysis and the research on the festival issues are all essential aspects of such an event. The only passive fruition and vision are not enough, today the audience becomes active part in a process of training and ongoing thinking. Even if the MIRA Lab audience’s response wasn’t very strong, the way mixing theory and practice, musical and artistic performance and research, is definitely the right one. 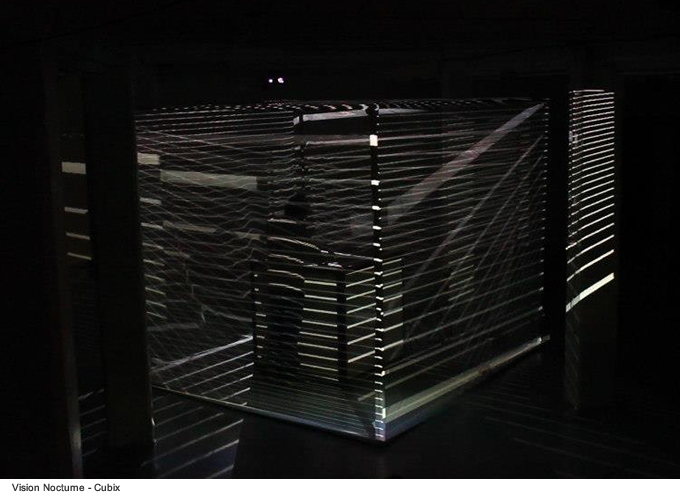 Another extremely interesting territory of the MIRA Festival is the one dedicated to audio-visual installations. Placed in one of the wings of the old factory Fabra i Coats, eight installations of Spanish and international artists, lighten the eight different halls of the exhibition space. Fruit of a scrupulous selection, the eight installations were chosen through an open call for artists, to which participated artists and programmers from 28 different countries, with more than 160 proposals submitted.

In the first hall we encounter the interactive installation Cubix, created by Belgian collective Vision Nocturne. A cubic structure of 27m3 – metallic and covered in each of its sides by translucent sheets on which are projected suggestive graphic animations – within which there is a multi-touch interactive table that invited the audience to generate new audio, graphic, and visual expressions. Cubix provokes an immersive experience, transforming the audience into interactive subject with the projections and the sensations produced by the installation.

In the next hall the Madrid-based studio Espadaysantacruz, presents an interactive installation that directly refers to a great classic of videogames: Space Invaders. The Invaders Project combines the mapping technique with handmade drawing on the wall, integrating the interactive and participatory factors to its own realisation. As the artists indicate: “Normally the projection mapping is based on images represented and integrated with the real architecture. With this game we take a step forward through the real-time 3D interaction”.

The still images presented by the Barcelona-based Device studio play with the technique of the stereoscopic photography and point directly to the concept of illusion inherent in the image itself. The project Ojo Mágico was also used as graphic, Web, and on paper campaign by the MIRA Festival 2013. 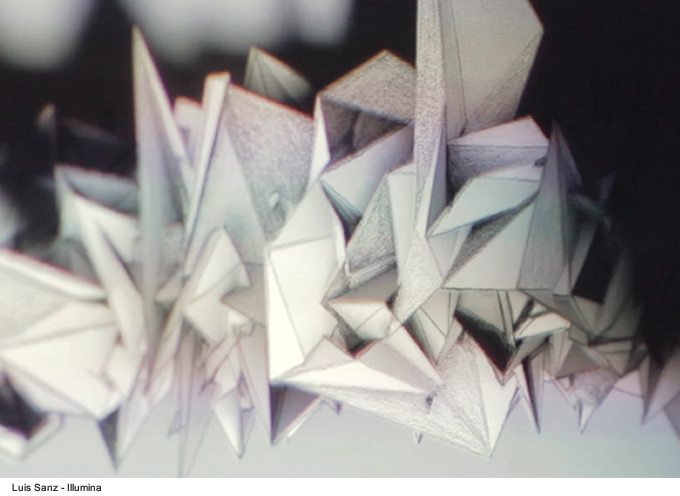 In a nearest hall there is the installation Soft Cell by Polish collective Pussykrew. A triangular environment, formed by three sheets on which are being projected images of skin from different parts of the human body, contains an object that from a tactile perspective recalls our skin and that by rubbing it produces a series of organic sounds that connect with the projected images. A hybrid and immersive installation, between technology and skin, which creates an intimate interaction between sounds, touch, and images.

In the two next halls geometry and the mapping technique are the protagonists. The piece Ilumina by Luis Sanz, Peruvian artist based in Switzerland, is poetic, suggestive, and seductive. On the surface of a sheet with a geometric design, Luis Sanz creates and projects a really refined and detailed micro-mapping. A visual journey among planets, tridimensional spaces and shapes from which is difficult to divert the gaze.

The project Videomapping Sculpture, by the Slidemedia Lab from Barcelona, consists of a 360˚ 3D projection on a sculpture of four circular rings suspended in the air. The project needs the audience intervention that, through the movement of your body, interacts with the piece drawing and projecting colours on its surface.

The installation V.I.R.O.I.A., created by the group PK Produccions (Telenoika.net), under the direction of Sergio K-sero, focuses on music and on interactive production. Three wooden artisanal instruments, similar to keyboards and synthesizers, are available to the audience. The simultaneous use of instruments produces an amusing audio-visual show that in addition to the sounds and the music projects images through the mapping technique. 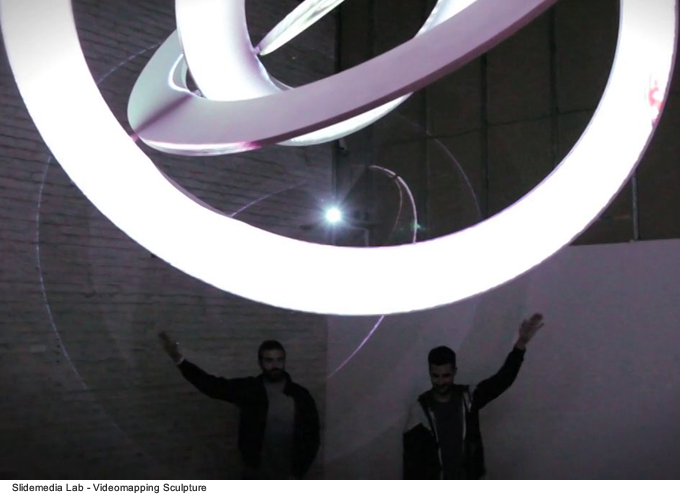 The last piece presented in the exhibition is the installation Mécaniques Discursives by artists Fred Penelle and Yannick Jacquet (Legoman). A surreal wall, full of still images, projections, animated and 3D objects, games of light and sound elements, characterises a piece in a continuous movement, which takes its cue from the idea of the assembly line to get to compose a poetic scene between the dreamlike and the absurd.

The eight installations provide a contemporary overview on new artistic techniques of the mapping and trace an innovative aesthetic path that feeds on the fertile interrelations between art and technology.

Despite the deep crisis that is going through Spain, the Catalonia and the city of Barcelona – where the different cultural structures have undergone drastic budget cuts, and consequently the activities – the MIRA Festival imposes with optimism on the cultural scene of the city, by focusing on a creative territory yet new, but that is in great growth and that promises much for the future: the mapping, the interactive installations, the communion between music and images, and research and training in the heterogeneous creative world of audio-visuals.