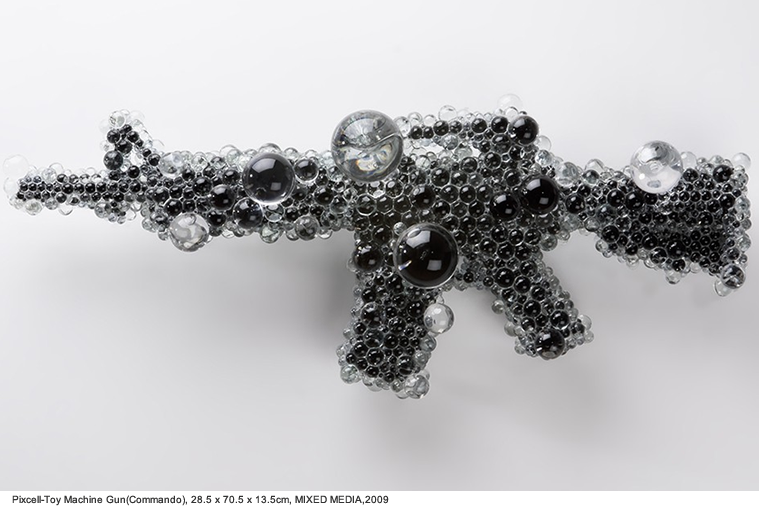 Born in the ancient city of Kyoto (Japan) in 1975, Kohei Nawa studied at the Kyoto City University of Art, and in 1998 moved to London and attended a sculpture course at the Royal College of Art.

In London he was exposed to contemporary artists such as British sculptor Antony Gormley. The symbolic art of Buddhism and Japanese Shintoism are additional Nawa’s influential inspirations that characterise several of his idiosyncratic works.

Nawa has become one of the most renowned artists in Japan, and his artistic production spans from sculptures and architectural interventions to installations and fashion. Nawa is at the forefront of a new generation of Japanese creative minds, grouped in an old sandwich factory located outside Kyoto, named SANDWICH, whose aim is to overstep popular labels of manga and anime in order to offer a less obvious view of Japanese contemporary art and culture. 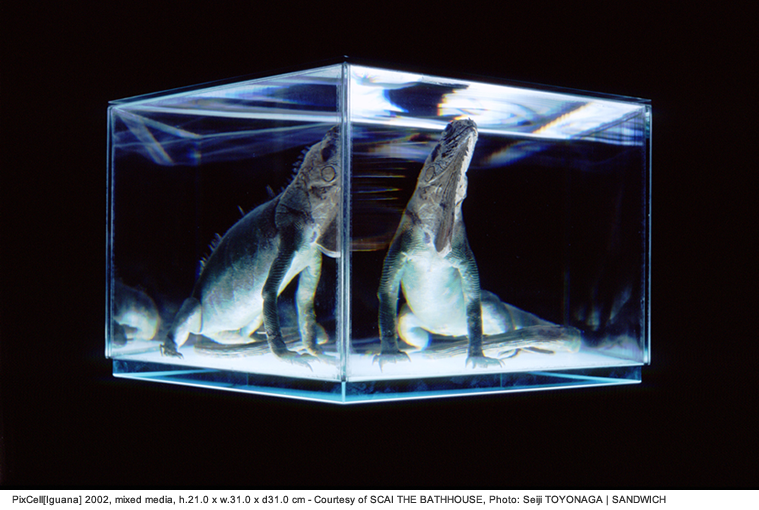 He has been awarded with grants from Japanese, American and European institutions, and has presentedhis pieces internationally in solo and group exhibitions. His works are part of prestigious collections around the globe; some examples are the Mori Art Museum (Tokyo, Japan), the Metropolitan Museum of Art (New York, USA), the Franks-Suss Collection (London, UK), and the Daimler Chrysler Contemporary (Berlin, Germany).

A leitmotif in Nawa’s work is the so-called “PixCell” (a term he coined by linking the words Pixel + Cell). The “PixCell” is a concept that combines organic cells with pixels – the smallest units of a digital image. By covering the surface of objects and stuffed animals with glass beads of different sizes, he claims that he is “PixCellizing” them. Through this sort of manipulation Nawa (re)defines existing objects and changes the way we perceive and interact with them. In the compelling series Prism, Liquid, Glue and Scum, Nawa transforms the very nature of the objects into something that is (only apparently) meaningless. By this process he activates the audiences’ vision, creating several metaphorical systems of representation.

I have recently had the honour and pleasure to interview Kohei Nawa in order to know a bit more about his fascinating works, his cultural references, and creative procedures. What follows is the outcome of this exchange of ideas. 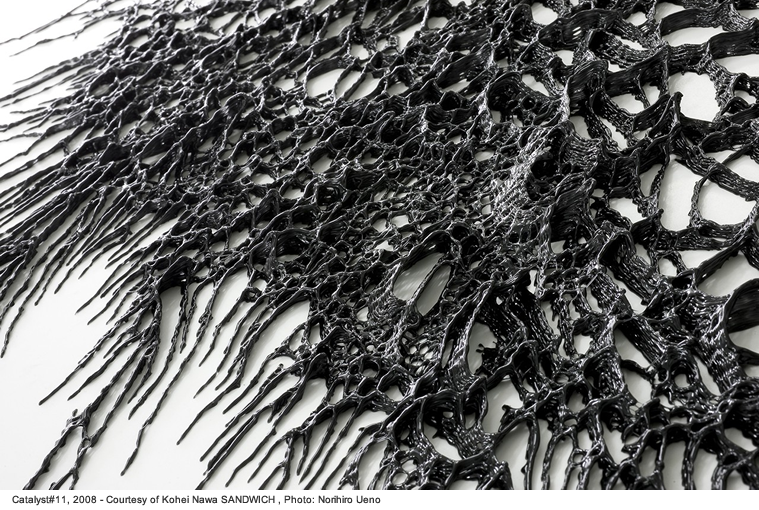 Donata Marletta: Digital culture and Japanese ancient traditions seem intermingled elements into your artistic production. Could you please tell us to what extent have your geographical and cultural origins had an impact on your works?

Kohei Nawa: Rather than a specific country or region, I always attempt to approach things from the viewpoint of the whole universe. For instance, if a certain sensibility exists in space, and something communicated from that sensibility to a different sensibility via matter were to create a link, producing a history of expression, I feel a need to capture that single link through the means of sculpture.

Donata Marletta: In many of your series – for example Prism, Liquid, Glue and Scum, you have the ability to trigger the viewers’ imagination and stimulate their senses. What is the starting point of your creation process?

Kohei Nawa: In the beginning I only have an obscure image of what I’m about to create. I have a concrete image of the final output when I complete my search and pass the process of material exploration. Serial works will never be complete. Every time you make a new work, it resonates with the past works from the series, and I reaffirm this connection. My new challenge will arise from that point of recognition. 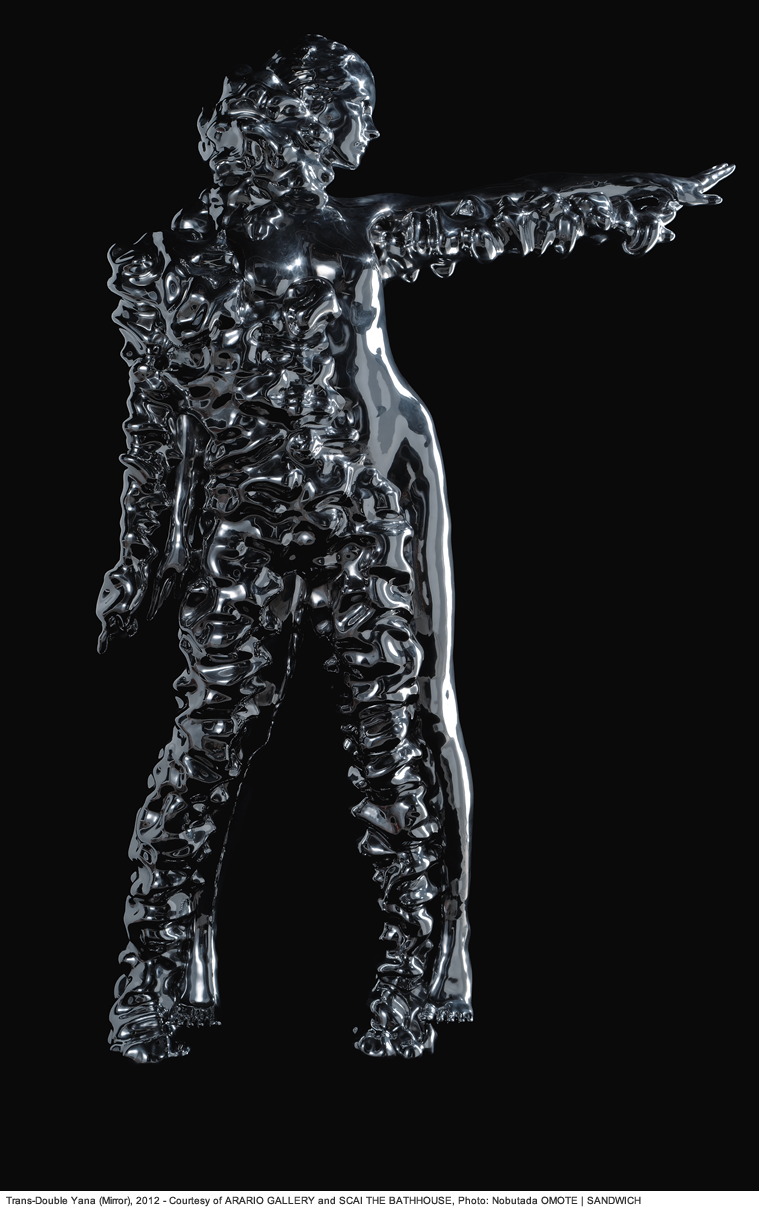 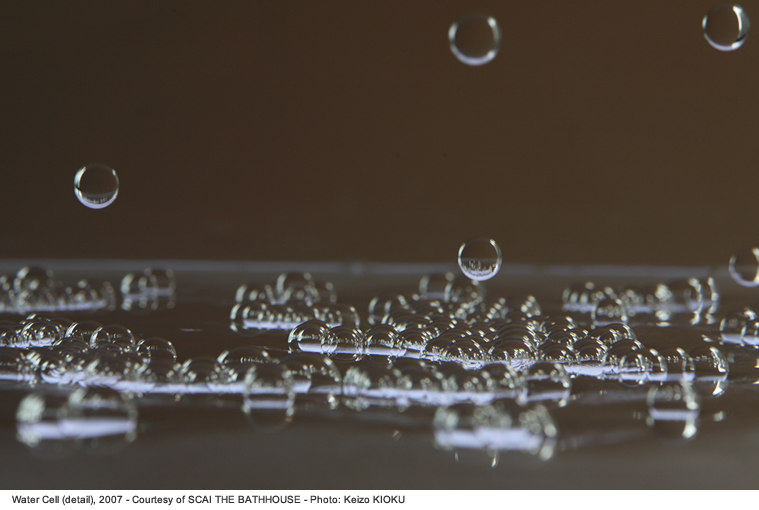 Donata Marletta: The deer is a recurrent image in some of your works. For example, in the series PixCell, images of a particular object are acquired through the computer and encapsulated in a layer of spherical cells. The observation of these spheres allows one to simultaneously “see” different details within it. The deer also appears in the series Scum, in which you give shape to the foamy layer that forms on the surface of a liquid when it is boiled or fermented. The result is polyurethane foam that increases in volume in a manner that evokes uncontrolled cellular division. In Shinto the deer is considered a sacred and divine messenger. What is the message that you wish to transmit through this highly symbolic image?

Kohei Nawa: I would like to describe “PixCell” series not about a “Deer”. The process behind the PixCell series begins by collecting motifs through the Internet. At that stage I first encounter the motif as an image (a group of pixels) appearing on the computer screen. I then acquire the actual object, and give it a skin of a large, indeterminate number of cells. When the motif is fully covered with cells, it becomes one of many different motifs that all have the same feel and same sense of distance. The lensing effects of the different-sized cells enable a number of details of the object to be seen simultaneously. This produces a visual experience involving a unique depth and continuity.

To our senses of vision and touch, the world is a continuum of surfaces, and all things are covered with some sort of skin. Because we sense and become aware of objects through their skin, it is the quality of the skin that determines whether or not we feel something to be real. The skin becomes an interface that links sensibility with matter, and images are produced through this interplay of sensibility and matter. 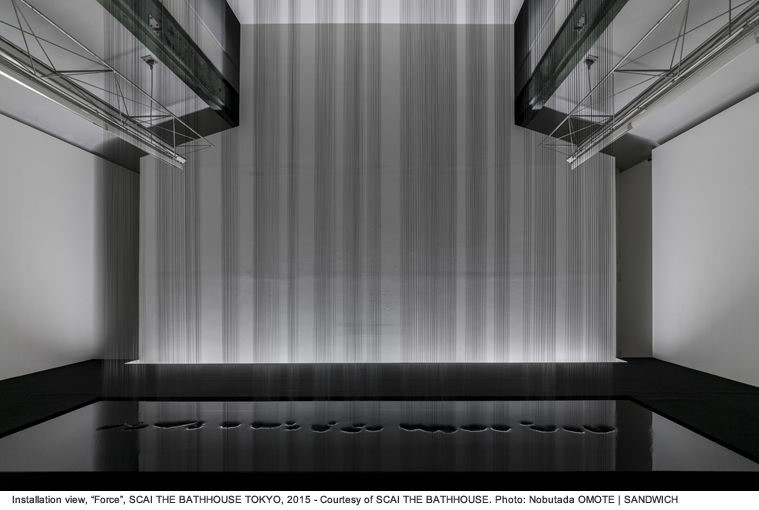 Donata Marletta: In your installation Force, recently exhibited at the Pace Galley in London (9 – 19 September 2015), you explore the idea of force and its powerful influence on our existence using gravity as a tool. Could you tell us more about this fascinating process and its resulting piece?

Kohei Nawa: I used Force as the title of a new work in March, and I have used the same title here because the theme of the exhibition is the visualization of gravity and other invisible forces present in the Cosmos. For this exhibition I have designed a space with works that incorporate physical phenomena such as gravity and inertia. The resulting installation space induces awareness that we are caught among time, space and materiality.

In the Direction series the works are formed by tracks of gravity and the Ether works are also a visualization of gravity. In the Moment series, the tracks are formed by a combination of the speed of circular motion and movements of the canvas. By addressing concepts such as velocity, direction, and gravity, these three series are linked together by a theme of the forces present in a space. The Catalyst series uses a material that matches the physical elements, and the work is produced by crawling around the space relying only on the sense of touch. In that sense, it represents a natural pattern emerging from the senses present in our bodies.

Donata Marletta: What are the challenges and major stimuli of working with chemical and organic elements, such as pigments, polyurethane foam, silicone oil, water, thermoplastic adhesives, bubble cells, ink, and prism sheets?

Kohei Nawa: The approach of making sculpture from granular materials eventually emerged when I was searching for my own means of expression, and is associated with the concept that the whole world is made from cells and cellular structures. At the molecular level, all natural and man-made articles are groups of particles. Also, if you look at animal cells, they are full of DNA and other forms of information. I work from the concept that the cell itself represents information, and also gives the material its shape.

Donata Marletta – Your body of work evokes different dichotomies – real/virtual, perception/illusion, organic/inorganic. What is the rationale of dealing with such contrasting themes?

Kohei Nawa – These contradictions or polarities – such as gravity and zero gravity, micro and macro, life and death – are very important for my practice. I keep asking questions: what is the distinction between these two boundaries? Do we really have a clear ‘borderline’? These questions help me clarify what causes contradictions, and it gives me confortable tensions and motives for my work.

Donata Marletta – I suppose that SANDWICH is your head quarter. Can you give us an overview of your creation and production process? Do you usually work together with a fixed team of experts and collaborators?

Kohei Nawa – SANDWICH began in 2009 when we renovated an old sandwich factory and launched a creative platform where architects, designers, students and other people of different generations and working in different genres could gather. We now set up a new team within SANDWICH for each project. In addition to art production we take on projects in areas such as architecture, graphic design, and performing arts. We have residential facilities available for artists from other regions or from outside Japan, and this helps to make SANDWICH a location for active international exchange and interaction. Sometime we change the members in each project.