Watching David Bowen’s Spacejunk, you can’t help but feel a certain religious piety has formed in the gallery space. The 50 twigs, controlled by servo motors and mounted on thin but tall metal plinths, raise their arms in supplication, as space debris rises above the horizon. The arms trace the movement of the debris – unseen by the gallery visitor – and lower again when it has passed. But of course, technology is the new religion and God is dead. And if that’s so, Spacejunk comes across a sculptural re-enactment of the Myth of Sisyphus, with Albert Camus’ interpretation of the myth offering us an inroad to understand David Bowen’s installation.

These 50 disciples feel as though they’re honouring the detritus of our attempts to reach out into space. In following the objects (tracked live via data supplied from a website) there is a fetishing of unseen forces at work in the installation, looking to bring back to our immediate, physical awareness the golden totems of past space race glories, going back as far as 1958. Every launch into Earth orbit is in some way a failure, because it reminds us that we’re still at the mercy of our faltering, (cosmically) youthful inability to master interstellar travel. Even geostationary orbits, for GPS and communications merely reflect our earthbound lives back to us. We rise up and fall back down, ignorant of what previous attempts at space travel should have made us realise by now: we aren’t ready to shake of the bond of human to planet.

The twigs fall, or rather, lower themselves into standby mode, when the tracked debris goes below the horizon. When it happens suddenly, it’s like the shrug of acceptance of the congregation, faced with the reality of their situation. For us it’s the acceptance that our technology will only ever be as good as it is at the present stage. Not a contradiction, but a realisation that we’re a confined within a moment of existence, with only the past trailing a path backwards, so we can see how far we’ve come. 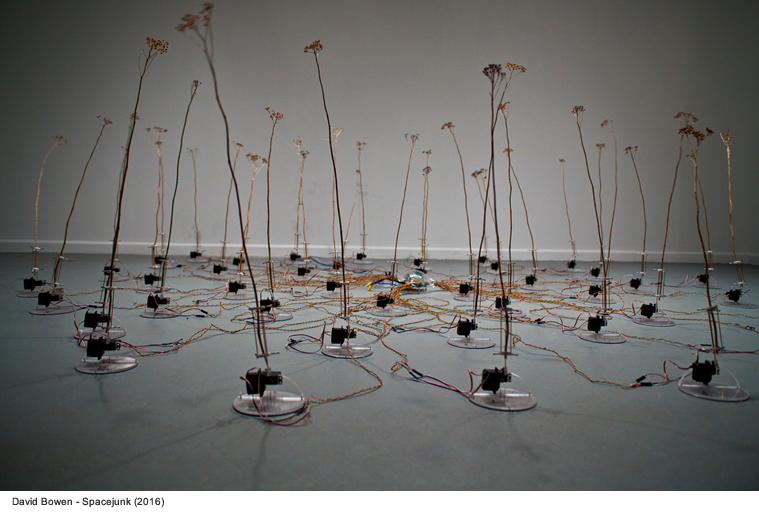 Spacejunk tracks, literally as well as figuratively, that path for us. And there’s everything in the debris, including frozen urine, ejected from spacecraft, to a spatula and an astronaut’s glove. These feel absurd but reveal the truth in space travel: that we take ourselves and our puny human flesh with us. Bowen himself sees the creation of this loose cloud of debris: “like we’ve created our own extra layer of the atmosphere out there. I see it as an extension of the anthropocene. I’m wondering when these objects start to become natural objects. It’s something I think about with the work.”

With the steady build up of objects over the decades, and the increasing amount of things we’re putting out into space, these anthropocenic objects are being tracked for safety reasons. The 2013 movie Gravity, envisioned a potential Kessler Syndrome: when a low earth orbital collision creates enough debris to create larger collisions and increases in a domino effect. As Bowen observed in our recent Skype interview: “Tremendous amounts of energy were expended to put [these objects] up there. Vanguard 1, for example, is still up there. They’ll be up there for millions of years because their orbit is not going to decay!”

Perhaps, as part of their worship, the twigs want the objects to return to their natural state? Everything is made from the elements of the universe, so why not have them return to their elemental parts? As David says: “Are [these objects] ‘naturally’ orbiting? When do they become natural objects again?” And there’s the aspect of decay of course, just like natural objects. They will eventually return their energy to the Earth, in one form or another, mostly burning up on re-entry.

Bowen has a wry interest in the absurd that a casual observer might not immediately see in the work. The tracked objects included a spatula, glove, and of course, chunks of urine. The idea that some of the objects tracked might be human piss, reminds us that despite our poetic narratives of space travel, we’re still organic, natural matter. This organic, natural form is evident in other works of Bowen’s (such as FlyAI and Fly Revolver), where flies become part of the work and often act as a computing device within the project.

There’s a breaking of the usual relationship between the gallery visitor and the art work in pieces like Spacejunk, where a kind of action at a distance, mediated by technology but invisible to the viewer is taking place. The work is influenced by events taking place beyond the gallery space. Bowen establishes this broader relationship of viewer, art work, physical location as a key aspect of the work. “Wherever the work is installed, that horizon is going to be different.”

There’s not a constant repetition of the behaviour: it changes depending on location. The data is harvested from websites that make the tracking data available and fed to the servo motors, but the work has an awareness of where is and the data changes accordingly. These changes are visible in the low arcs or high pointing movements of the twigs. The twigs quiver as the precise brushes of the servo motors work away to control and point the debris. “There’s a collective jerk as they align.” 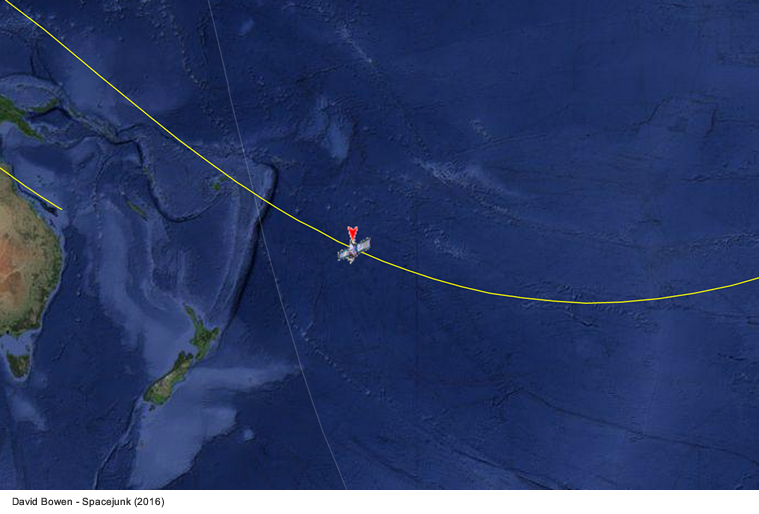 David Bowen touches on data visualisations when he talks about the work, but really it’s just using contemporary idioms, there’s no scientific activity meant by the work. For him, its value is in the poetic. Bowen comes from a sculptural background, so the physicality is part of the work, and really on the scale of the localised space, they’re not far apart at all. Bringing the distant, on to a human level. The twig as an arm, gesturing.

In The Myth of Sisyphus, Camus posits that, by facing the eternal struggle of our lives, and finding some contentment with it, we can find the existential freedom to live on. Spacejunk is a reminder that humanity has decided to begin the struggle to climb above Earth’s surface taking much of our detritus with us: which is part of that struggle, of course, being not just one of overcoming physics, but our own intellectual limitations. Instead of being an homage to the failures though, Spacejunk reminds us that although we constantly fail, we always rise up and try again.