Like a tug of war, the installation Order+Noise (Interface I) negotiates the boundary between two interacting systems. Motors, strings and elastic bands are set in motion by the random signals of Geiger-Müller tubes which pick up the natural ambient radiation of the earth. The installation explores the interface at which these elements influence one another – a continual process of kinetics that causes complex and ever-changing movements to emerge.

Research and experiments essential to the realization of this exhibition were carried out within the framework of Baecker’s research project Time of Non-Reality at the Graduate School of the University of the Arts Berlin.

Ralf Baecker’s focus is on the fundamental structures and conditions of our digital world. In his works he addresses the material scope of technology and its cultural construction. His systems seek to expose the relation between thinking and the world, thus turning his machines into epistemological objects rather than just tools. 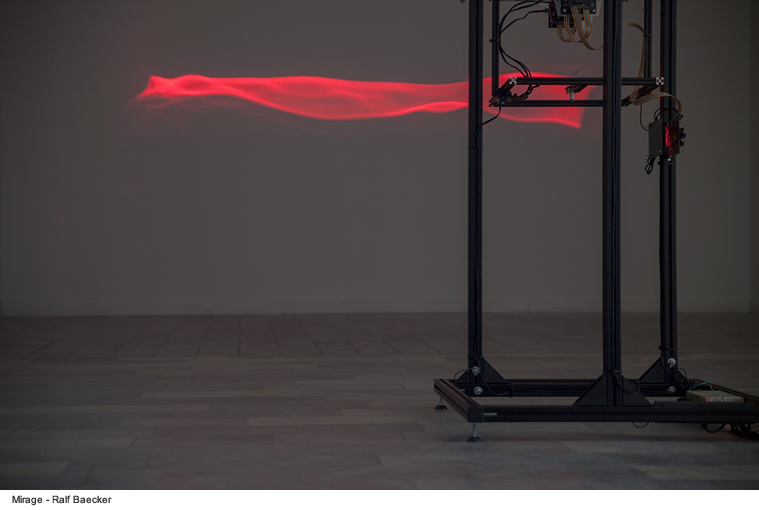 Ralf Baecker’s work has received several awards including an honorary mention at the Prix Ars Electronica, Linz, second prize at the VIDA 14.0 Art & Artificial Life Award, Madrid, and a stipend from the Edith-Russ-Haus for Media Art Oldenburg in 2012. His work has been exhibited at the International Triennial of New Media Art at the National Art Museum of China, Beijing, Malmö Konsthall (Sweden), Künstlerhaus Wien (Austria), Martin-Gropius-Bau, Berlin (Germany), Center for Contemporary Art WINZAVOD Moscow (Russia), and Laboral Centro de Arte Gijon (Spain). Ralf Baecker is currently a fellow at the Graduate School at the University of the Arts Berlin.