Notes On Online Middle East. The Infinite Potential Of The Masses 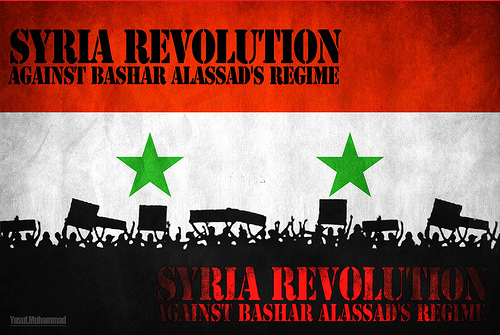 Middle East is burning. Syria is only one of the last pieces of this domino gone mad, which exploded unpredictably from the inextinguishable flames of Tunisian and Egyptian revolutions, both capable of overthrowing the existing regimes and reaffirming some old principles: the infinite potential of masses and the visceral political unmanageability of peoples, completely opposite in direction to the authorities’ mechanical violence which, in fact, the more it wears out, the faster it actualizes itself. (cf. G. Agamben, Means Without End: Notes on Politics,1996).

Though I cannot analyze in detail each of the rioting countries in the Middle East, I would suggest some quick reflections about how and how much the net is playing a key role in creating political dissent and giving birth to cultural movements that are challenging the survival of some of the toughest political regimes of our times.

It is yet not possible, though, to express an exhaustive opinion about the kind of approach that Middle East peoples are using in regard to the Internet. Nevertheless, these peoples are showing an unexpected and unprecedented awareness in using the net, and it is worth considering that, unlike Western countries, these young countries cannot still take the access to the Net for granted: both for political (censoring of many Internet platforms) and technological-geographical reasons (huge desert areas, poor infrastructures, low-fi). And yet, none of these factors seem to stop their curiosity, anonymously satisfied through daily updated proxies and a phone word-of-mouth, reaching even the most distant places and those less exposed to the net’s information flow. 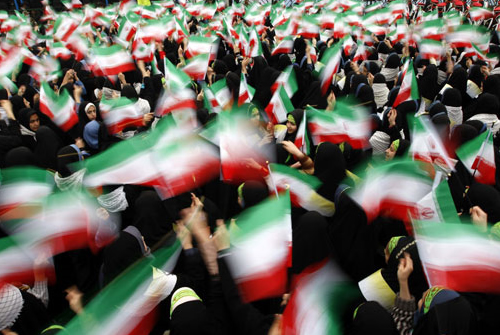 Let’s not forget, for instance, that Iran is the third country in the World for number of bloggers, after the USA and China. Moreover, the first movement to ever deal massively with the net in the Middle East originated in Iran, creating the so-called Green Revolution that followed the contested presidential elections of 2009.

The way the Net has become an important tool of a society self coordination, planning of events and meetings among activists, as much as of outside communication, unfolding events by overcoming the censoring of traditional media. 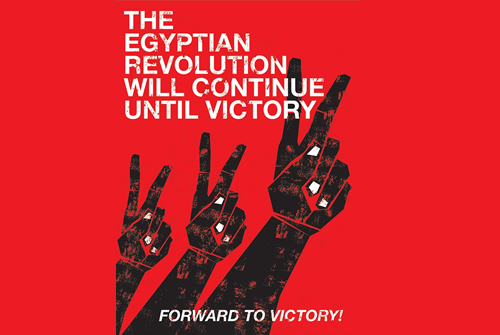 In 2009, I was in Teheran, and it seemed to me that the use of the net was mostly aimed at the outside. SMS and word-of-mouth for in loco organization, the Internet seen as a sort of reversed funnel where to throw every small bit of information in, and defuse the anechoic chamber the regime was trying to lock people in. In the meantime, the echoes of deep linking and blogging were revealing to lazy TV lovers the Veil of Maya on the violent repression of the Iranian Green Movement. Meanwhile, the group hacker anonymous was supporting the revolt.

Now as then, ruling regimes affirm that reformist revolts are somehow guided by Western countries. Avoiding the debate on ghost cablegrams, this statement rings somewhat true, though. While, on the one hand, the net is undoubtedly the tool through which a certain Middle East culture looks for spaces to emerge, on the other, the net is also the place through which Western popular culture virally filtrates, reaching even those countries that are institutionally trying to refuse it.

Then, in this sense, some of the requests by young Middle East peoples have possibly something to do with the absorption of Western culture through the Net. What can we say about the video of the Iranian girl dancing to the rhythm of techno-pop music in front of her webcam, probably imitating what she saw doing by a Western same-age peer? We are likely to perceive it, and maybe she feels the same, as a more or less conscious act of protest against a regime, oppressing her country and her private sphere. 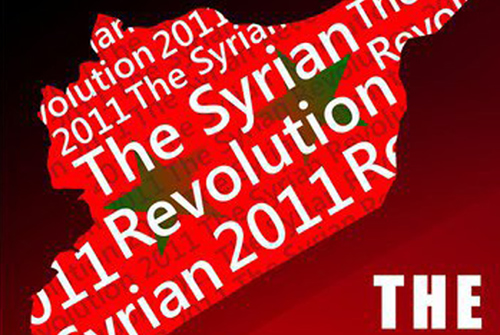 What can we further say, about the life-style of young people living in Iranian metropolis, or alcohol use, or the dress style, the illegal film screenings, the concerts in unauthorized rehearsal studios, and the prohibited literary readings? Maybe, in Iran, the split between a public space where Islamic laws are in force, and a private one where satellite TV and the Net have the upper hand, is the socio-political element allowing to include Western culture within Tehran urban tissue and, at the same time, to exclude it at will.

How much do girls’ dances in front of their webcams or mobile phones exceed the limits of private space to become a basic need for appropriation of a public, albeit virtual, space, thus immediately assuming a political value? In that action, there is probably the same need for self-affirmation that we would retrieve in a similar performance by any other girl from a Western democracy, yet the feeling is that the same behaviors transferred to a place like Iran go well beyond the individual sphere of the self, though not denying it, to become part of a collective discourse of a greater political significance.

Maybe, those seemingly nihilistic acts of protest that we saw in the West, become in Iran affirmative marks of those who act knowing by intuition that what they are doing is an action to be shared with others, a step forward a social transformation and a possible alternative political order.

The diffusion of new media and their ability to be integrated and mutually crossbred are indeed playing a key role in the formation of new socio-political scenarios. I will not support the argument for the liberating power of technologies, but I can see in them a potential tool for the creation of new different forms of political and social participation, even from the by now obsolete Western version of democracy, inevitably taken as an albeit implicit model by Middle East revolutions. 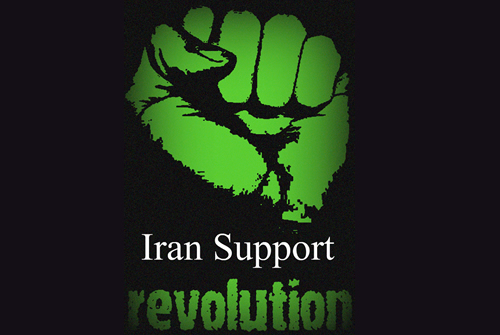 The theme of intra-/intermediality is maybe one of the most interesting from this point of view, especially in that it investigates the relationship between mass media and one-to-one media. No doubt Marshall McLuhan’s reflection on how and how much old media react and adapt to the new ones can still provide an interesting input (cf. M. McLuhan, Understanding Media: The Extensions of Man, 1964). If, on the one hand, citizen journalism creates problems in terms of abuse of the cognitariat, on the other, citizens’ direct participation in the creation of information turns the passive perception of TV into a bomb ready to explode to the viewers’ comments and to real-time information, launched on the web by its users’ interaction. In this sense, the work by Al Jazeera has been exemplary and, in these very days, the mass mediatic diffusion of posts and twitters coming from Syria seems the best way to keep ourselves informed on the current situation in Daraa, where the attempts at repression by the regime of Bashar al-Assad are increasingly violent.

Yet, what are the ways through which mass media inevitably filter the large amount of information available on the Net? This is yet to be explained: how the different media, according to their political tendencies, handled the diffusion of the cablegrams shared by Wikileaks is a glaring example of it.

However, Syrian counter-information runs independently through the largest online platforms:

It is also easy to find news and information on the revolutions in Tunisia: http://twitter.com/#!/FreeTunisia

On the other hand, it is also important to remember that the mass media mythologem claims the Egyptian revolt started from a Facebook post, feeding a sort of “logistic hypothesis” in this sense, and with it the illusion of a well-spread diffusion of the Net in the country. Yet, once again, the essential element seems to be the hybridization of all media, and the creative and collaborative use these peoples are making of them. 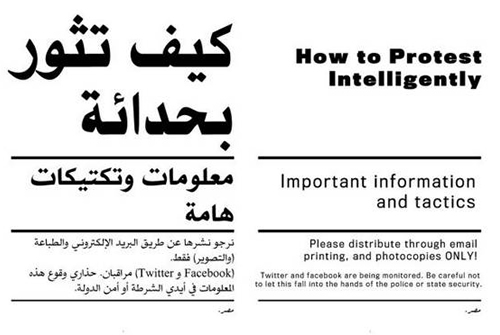 Nonetheless, other elements such as urban scale factor in the Egyptian case are not to be underestimated. Tahrir Square, a strong symbol from which the protest virtually never moved, has indeed allowed a sort of spontaneous coordination that soon stopped relying on the net. As a matter of fact, from a certain point onward the exchange of information through the most popular social networks has beenmostly deemed dangerous.

The Arab-Middle-East Spring seems to remind us the potential that new communication media provide to the modern global village, and metaphorically reveals the work of thousands of Western hacktivists who struggle to make the net a place for the freedom of expression of a collective intelligence able to have a both creative and original political influence, by waking us up from the prolonged torpor into which the democratic system seems to passively fall without even noting. Western representative democracy is too slow, either for the new temporal dimensions that new technologies force us to live in, and for the desire of a different decision-making political process by an increasingly substantial part of young Western citizens.