Vjing For Lights And Colors. The Sketch Projector Of Shantell Martin 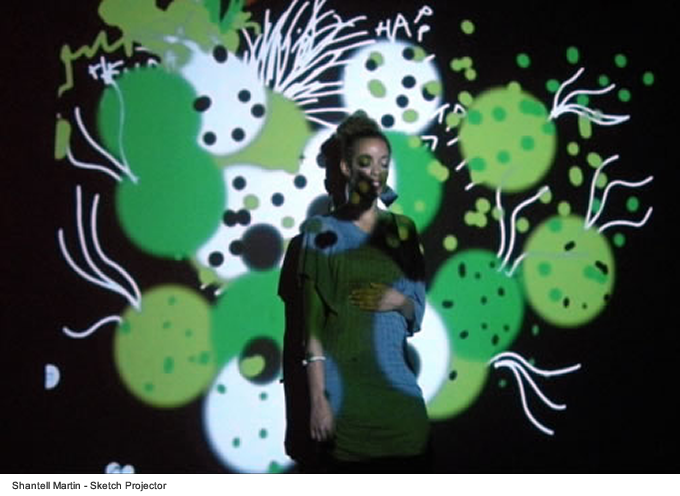 Shantell Martin is an illustrator and an English Vj who has fused the latest technology and traditional media in a new and unique style through which she creates performances using her drawings. She began her journey as a traditional illustrator, until she discovered that she could draw with the graphic tablet and project what she was doing during concerts, happening and performances.

She soon became internationally known for her video performances, in which she draws live on people using projections and markers, Shantell uses the audience as inspiration creating unpublished visuals every time. With a very simple method she was able to bring her visuals everywhere, breaking the wall of prejudice about this kind of performances.

For some years now having moved from Japan to New York, she recently performed at the MOMA, at the Music Hall of Williamsburg and at the Hidden Ora in Tokyo, and she has been invited as a new talent to the annual PSFK conference, a New Yorker company in charge of new business.

Through her inconondibile features Shantell creates delicate worlds continuously in transformation, populated by semi-human and animals. After having climbed to the top of the Vj world, she writes for the magazine “Dj Mag”, Shantell has expanded her conception of the traditional drawings combining light, improvisation and interaction with the audience. Are your ready to meet her? 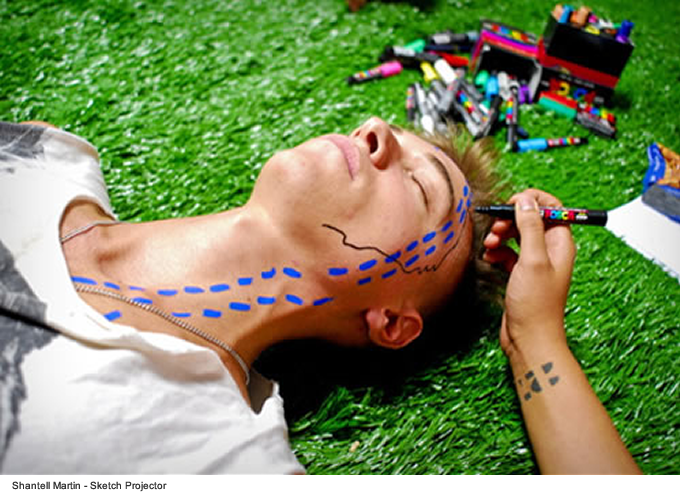 Silvia Bianchi: Your carrier started as an illustrator, when and how did you start to work projecting your drawings?

Shantell: The projector is just a tool to make what would otherwise be quite small or detailed bigger than life. I started to do this in Japan in 2006 as a way to take my illustrations out of a room and into a space with a live audience so they could see my illustrations unfolding.

Silvia Bianchi: You transformed the use of the graphic tablet in a simple way to come in contact with the people, in an era in which everything is very post-product. Do you think that the result of your work comes from the tendency to retrieve the analogical?

Shantell: With any big move in consciousness or culture or technology there’s a reflex to go back to the past. Yes, I’m using technology, but it’s an ordinary pen I’m using in a digital way. At its simplest level it comes back to me physically drawing, and that’s something people can relate to. It’s not out of their reach.

Silvia Bianchi: What is your background? Which are your origins and your main influences?

Shantell: I grew up in Southeast London hanging out and playing in the streets. I didn’t really draw much. I got into art a bit later-I didn’t take it seriously until I went to art school at age 19. I studied graphic design at Central Saint Martins and specialized in illustration. My influences are immediate: what’s going on in my life, around me, in front of me. It’s hard for me to go out and seek influences-whatever’s bumping up into me right now is what informs my work. A way to make that more abundant is to travel, explore, meet people, and soak up the environment. 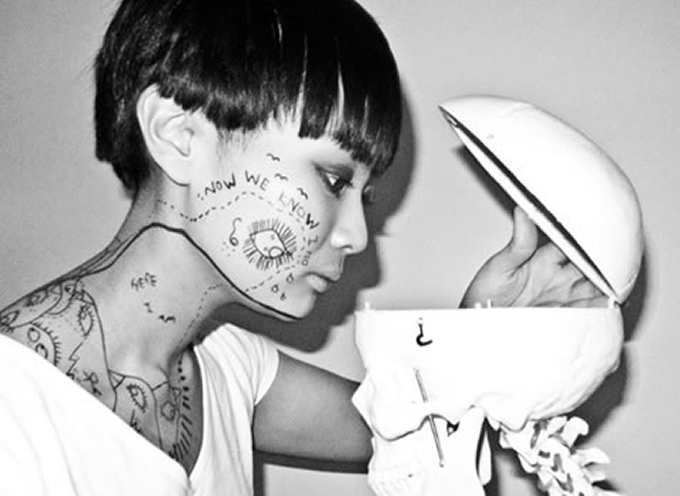 Silvia Bianchi: You moved from London to New York passing by Tokyo. What have you learned from these places in terms of visual culture and also about the people with whom you have worked with?

Shantell:I lived in Japan for almost five years, and living in a country and culture that’s completely different from where I come from gave me the space to figure out who I was and what I wanted to do. I didn’t have to live up to anything–there were no stereotypes set up for me. In Japan, a place with so much equipment and technology around, allowed me to explore who I am and what I wanted. Now in New York that process has allowed me to work out what I do with what I’ve honed. This city is a platform that pushes you to do what you want to do, or else you get out.

Silvia Bianchi: How is being a Vj considered Japan and in New York?

Shantell:In Japan it’s huge. VJs are on the flyers and on the bills, and venues and clubs are very much equipped with what you need: big screens, mixers, good projectors. In New York it’s the opposite. Ordinary spaces or clubs don’t encourage visuals here. Japan is a very visual culture so it’s expected. It’s not expected here-you have to call to check if they even have a projector.In the smallest space in Japan they’ll have a screen and projector and staff. It’s not that there’s no interest, but you might have to be prepared to bring your own stuff. That’s been a learning experience that has angled me into places I wouldn’t usually do live visuals. As soon as I graduated I moved to Japan so I don’t have much knowledge of how it works in Europe. Here in New York, you still need to seek out these opportunities and spaces out a little. It’s two-sided.

Silvia Bianchi:Recently you performed at the MOMA, at the Gershwin Hotel, at the Collette Blanchard and you held a conference at the PSFK. How do the cultural institutions and art galleries act towards your type of performances?

Shantell: Here in New York you must be ready to look for situations and find opportunities. But in general we say that it is bivalent, there is interest from both sides. 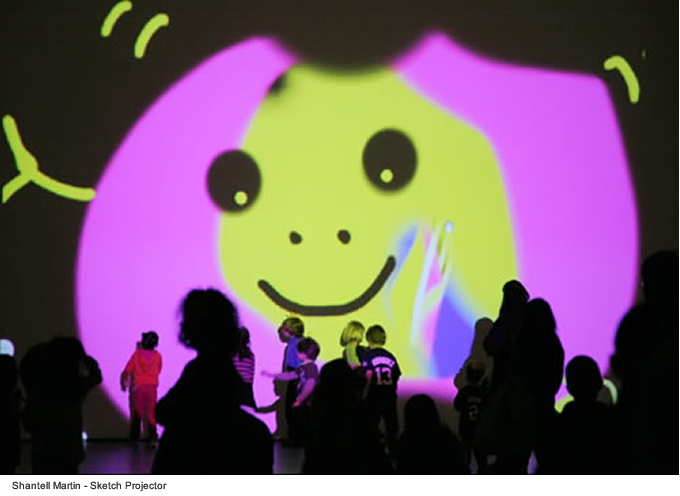 Silvia Bianchi: Did you find difficulty in the world of contemporary art proposing yourself with a pretty visionary method like the sketch projection?

Shantell: The only difficulty is that people want to put you in a box. When they see something they don’t quite understand or haven’t seen before, the tendency is to ignore it, or perhaps not encourage it, because they can’t categorize it. What I do is a bit of a hybrid: it’s live, but uses technology, but also drawing, and in a traditional scene people sometimes don’t know what to do with that./SPAN>

Silvia Bianchi: You work with many different techniques: tape art, illustrations, painting.How do you prepare the performances and how do you create the connection with people?

Shantell: The joy of how I work is that I’m 100 percent improvised. I’ll find the tools of what I want to usefor example, tape, a park, and friends-and we’ll just see what happens. That’s the great thing. If you gave those things to kids you would expect them to have fun. So why not the same with adults? It still works. It’s the same. And it’s the same with drawing on people. The space will work with what we’ve got. We’re supposed to be more rigid and want to work to guidelines as adults, but actually we’ll all quite happily have fun spontaneously if we’re given the opportunity.