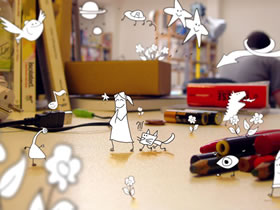 Milan is one of the most important centre of international design. It is the location of meetings and debates of creative realities related to the design mixed with business and show business, as in the case of the Salone del Mobile, a reality that is getting bigger and bigger.

We’re talking about Interaction Design Lab that, as the name suggests, comes from a rib of the Interaction Design Institute of Ivrea and that, as you can easily understand, loves to work on the experimental borders of the design, through technologies, integrating a certain planning tradition with the most actual tension to the digital. ID-Lab is a workgroup, a study where the most different experiences of professional people flow into: Stefano Mirti , Walter Aprile , Massimo Banzi , Gianlugi Mutti are names that will certainly say something to some of you.

The activity of ID-Lab results more and more evident, most of all during last months, when the organization of interesting workshops on software such as Arduino , Max Msp , Processing called the attention on some artists from Milan, but also professionals or curious nerds, disappointed by the closed didactic offering of the Italian technical-artistic schools on themes such as graphic and digital animation, design, sound and most of all interaction.

It is therefore correct to confront with other centres and schools that operate abroad in this direction, but also correct, in my opinion, to spend some words on the few national realities that operate with merit and conscience of the context in which they’re in. So, we had a little talk with Stefano Mirti , founder and director of ID-Lab.

Marco Mancuso: Can you tell me the genesis of the ID-Lab? When was it born and why exactly in Milan ?

Stefano Mirti: ID-Lab is the spin-off of the Interaction Design Institute Ivrea – www.interaction-ivrea.it . In 2005, when it was clear that IDII wouldn’t continue in Ivrea , a group of people (related to the “e1” – exhibition unit ) started resonate on another life for the experience under a different form. http://projects.interaction-ivrea.it/exhibitions/ is the website of the e1. We were making different projects for inside and outside clients, public and private. It was fun and amazing (and it has a particular economic sense). So it became quiet spontaneous to continue alone. ID-Lab was born the first January 2006 (as the last contracts with IDII ended the 31 st December 2005).

Milan is the most comfortable location where you can manage a design business. Actually, we have two offices: one in Turin and one in Milan . Two deeply different cites, two different way to intend the design. On this tension, we can create tons of things. Turin is an interesting city from the programming tradition point of view, that is no “design” though in the consolidate Milan acceptation. Marvellous!

Marco Mancuso: You are a group with different professional experiences. How did the team formed and how do you activities develop in the specific?

Stefano Mirti: In Ivrea we spent five years learning how to talk. The designer with the administrator, the software with the hardware. The one who communicate and the one who creates. The quality of the work in Ivrea was from the city, an horizontal system that sees the presence of different people. In the system there’s no top or magician or someone more important than another (a reality completely different from the traditional design or architecture, that live in a pyramidal condition). More than a work team, we can talk about structure. There are three different competence : the administration, the design and the technology. The backbone is the administration, the other two collaborate with it according to the different works.

So we never create a theoretically work team. We generally start from the people. Given the competences xyz, we find works or opportunities of that nature. There isn’t a pre-built grid folded with competences, rather a group of people that moves in accordance to their abilities. We’re always curious and interested when we meet people different from us.

Marco Mancuso: How much the desinence Lab is characterized by your activities? The term immediately suggest a laboratorial suggestion of your activity.

Stefano Mirti: Very much. ID-Lab was born to play with the academic realities. It’s been this way in its first year of life, working with different institutions, organizing workshop alone. Now we’re consolidating a series of relationship with Naba http://www.interactiondesign-lab.com/workshop/ . The English “knowledge” is one of our principal activity . As it gives the opportunity to experiment, research, move around bond and constrictions related to the professional practice. There’s another level, referred to the Anglo-Saxon tradition (that we’ve been exposed to in Ivrea for a long time). In Italy there’s a division between who does and who thinks. The mechanic “does”, the advocate “thinks”. In the Anglo-Saxon world this division doesn’t exist, most of all in our area of work. There are people that “do to think” or “think doing”. From this point of view, we created a lab, a laboratory, a store, a place by the different experiments.

Marco Mancuso: You organized some farseeing workshop, some that other Italian institutions never even thought to do. How did they go? How did people react? Which are the next?

Stefano Mirti: It was an experiment . We tried to see if Milan is able to organize interesting workshop trying to equalize incomes. They were all good (even the economic aspect) and we’re starting the next turn, preparing the third. The first turn saw the participation of forty people in three workshop (lots, even if it wouldn’t seem so). People were satisfied, without considering that all of this has a great value in terms of communication. The third turn will have as theme the robotic (hacking an Ikea lamp, turning it into an articulated arm), the cell phone technology (two days to project and implement a program that works on our cell phone) and a third to decide.

Marco Mancuso: Which are the main criteria to choose the workshop and lab themes and how are they financed? Do you have public or cultural funds?

Stefano Mirti: Themes for workshops are chosen basing on the network of people we have access to. We define interesting areas (with the presence of design and technology), we contact different people, we resonate with them, and so on. The workshops are fee-paying. Not a lot, but not even for free (it always seems that free doesn’t worth). A modest cost (on the order of 1000 euros) that people interested to this arguments can afford. About funds We had a fund by the province of Milan , but not specifically for workshops. The challenge is to define a format able to live alone. Maybe able to propose in other cities or contexts. From our point of view the workshop is a project as many others, that implies an initial investment but then must walks on its legs. And it won’t, there is something that lacks or doesn’t work. We’re satisfied, but we’ll have more precise thoughts in a few months.

Marco Mancuso: Have you thought to ulterior development project activities or residences for Italian or foreign artists, as other important European media centre?

Stefano Mirti: No. We all love art and know the world of art quite well (some of us truly well). But we do design, that means things with an evident use value. We do not mix the two, generally. We are designers, we do design . The art world functions with completely different rules and usually the union of the two only generate big confusions and disaster. We could talk for days and days about this. But we have a practical nature and referred to particular clients asking for different works. When we develop autonomous projects, such as the workshops, they have the aim to became a product, something that someone can use, and so on. The artist proceed in a different way…

Marco Mancuso: What is, in you opinion, the interaction design nowadays through the use of technologies?

Stefano Mirti: Hard question We could say that, in the 60’s the only possible design was the industrial one. Maybe now it’s the same. We’re moving in a world where the interesting challenge is the interface, the modality of relation between men and machine. When you find a plug, there you find an interface. How are these interfaces? How do they work? I don’t care about the shape of my cell phone, rather to send sms in a quick and intuitive manner.

Marco Mancuso: Do you think that the right equilibrium between aesthetical exigencies of design, programming techniques and interaction man-machine will be quickly reached?

Stefano Mirti: Who can say it? The doubt is not the objective (the equilibrium), rather the term “quickly”. We will surely get it, one day, but now everything can think to a totally different adjective than quick.

Marco Mancuso: How much the develop of the technologies will influence this?

Stefano Mirti: Nothing. Technologies have always been present and influenced the objects we’re using. A paint-brush will give a certain type of writing. When I need to carve the rock with a chisel, I’d probably make signs deeply different from those made with the brush. Every époque has its necessities, its desires. From this point of view there is nothing new. The electric light radically changed the traditional tavern of the nineteenth century. Then the radio and after the WWII the new technologies, the new transformations. What will be the next transformation? Which the new technologies? We do not know for sure, but the mechanism is always the same.