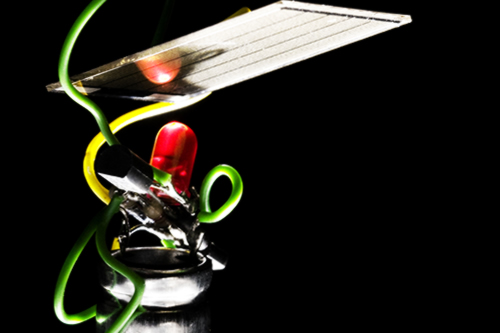 There are practices in the use of artistic and creative technology that can be compared to a sort of undergrowth because rich in rare and unexplored things. In the shadow of spheres and consolidated languages, characterized by codes and aesthetics, almost all supported by theories both by the public and by the market. These practices are hard to interpret through the framework of digital art because they are generated by s remix of ideas and subjects, that, on one hand have to do with the history of experimentation of electronics in the artistic field and on the other hand they regard the hacker culture, electronic art and technological design.

We are talking about the electronic and interactive do it yourself, the revisitation in an artistic way and a high tech approach to the “do it yourself” design of the fifties, which definitely represent one of the rarest organisms in the so-called undergrowth of digital culture. In digital culture the combination of trans discipline between art, science and technology is carried out covered with the reflection on today’s society and on the future society regarding themes like:

At the DIY electronics practice, one suddenly notices an original and playful approach in using technology let alone the anticipation of some key elements in new tendencies in art and design that are directed to the incorporation of the digital in the physical, asking artists and designers to abandon pixels and to pass to a transistors, circuits and welders. 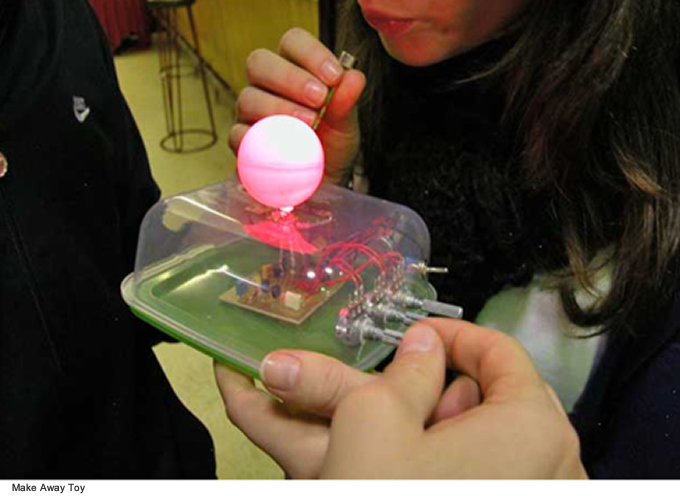 In the undergrowth some recognizable projects can stir up curiousity and interest, like for example, the Swiss Society of Mechatronic Art, a no profit organization in Switzerland, particularly in Zurich. This organization takes care of initiatives in which the experimentation with electronics and interactive becomes a way of connecting artists and people in the science and technical sphere and a way to open the doors of their world to everyone. If you walked in to a room where the members of the SGMK had decided to meet to reinforce the circuit, create robots and sound boxes, the first thing instinctively do is turn around and leave or to ask yourself “why?”.

In the text that follows you will find a few questions I asked Marc Dusseiller, a Swiss scientist specialized in nano technology and one of the founders of SGMK.

Serena Cangiano:Can you tell us about how your company started?

Marc Dusseiller: the Swiss company of Mechatronic art starts five years ago. There were existing projects to bound to Markus Haselbach‘s activity; he is one of the founders of SGMK. He organized meetings where various groups of artists and engineers run tests on electronics and build things such as analogical synthesizers. After a start up phase, I joined the group and we worked on the creation of this no profit organization. The choice of the name is a bit absurd considering that not everyone knows what Mechtronic Art is.

Serena Cangiano: Can you explain what is?

Marc Dusseiller:The definition of Mechatronic is: the combination of electronic and mechanic and therefore Mechtronic. This means the union of these purely scientific worlds with art, SGMK works on this unity by getting people coming from the scientific and engineering background, two very technical worlds, with the art world. 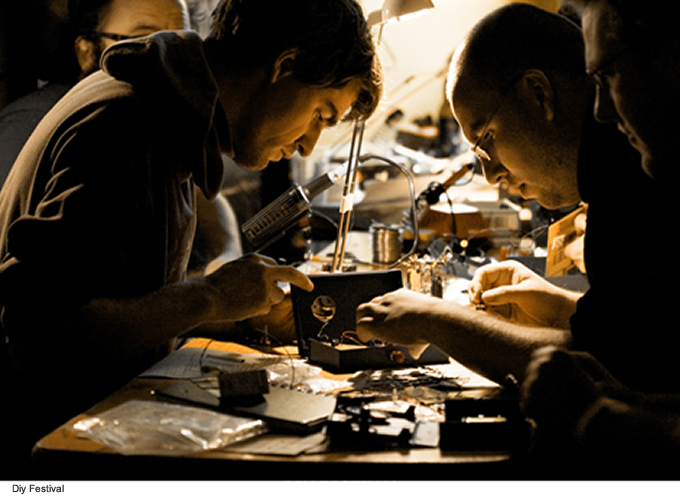 Serena Cangiano: What exactly SGMK do? And what do you all enjoy doing?

Marc Dusseiller: One of our main intentions, a part from using a different approach towards technology, is to open the so called “geek world”, this “do it yourself” approach to people everywhere and create activities that have a local social impact, we regularly organize workshops to introduce people to sound electronics, robotics, giving them the minimum knowledge that allows them to control everything using a computer.

We invite artists and people from the ” do it yourself” community, both local and international, organizing events like, the DIY Festival, festival of art and technology. During this festival we offer not only exhibitions and performances, but we also aim at involving all of our visitors, who in only a few hours in our workshop learn how to create their own sound and robotic objects. This is what we enjoy doing: gathering people, who build things, learn and share their capabilities.

Besides the festival we dedicate ourselves to the organization of some summer meeting, it’s called Home Made, where we put together week long workshops in a picturesque or historical sights in Switzerland, a sort of summer school for handymen.

Serena Cangiano: The SGMK seems to offer very original ideas, a practical approach in DIY and hacking, that is based on the idea that people can recombine technology and modify it according to their needs and wishes in order to create their own messages and meanings. However not only, this is all done to have fun as well.

Marc Dusseiller: The term DIY has a really long history but only recently it has assumed a connection with the hacker culture. In this case hacking is not seen for its negative aspect but they refer to the fact that technology is used in a different way than it should be, to satisfy the need for creativity. For this reason we try above all things to apply an aware attitude and we try to organize events where participants can discuss what technology means to them. In our festivals dedicated to the “do it yourself” method, our goal has been to introduce people to the DIY electronics practice and to electronic art, even though this field seems a little geeky.

From the beginning of our project we have always tried to defuse this culture and bring people closer to this world and make them realize how it could be fun and interesting as well as educational. We have also started to organize, for example, the DIY Make away series, a few short workshops where the participants can pick out an electronic or interactive object, like you usually pick out things from a fast food menu, that they would like and within a few hours, with our help, they are able to construct their own small synthesizer, laser systems and robots.

In order to do all of this we have special instruments and kits used as starters such as Micro Noise, a synthesizer that communicates with light sensors and allows you to create beautiful sounds. Families can use this kit and create small interactive systems for their kids. 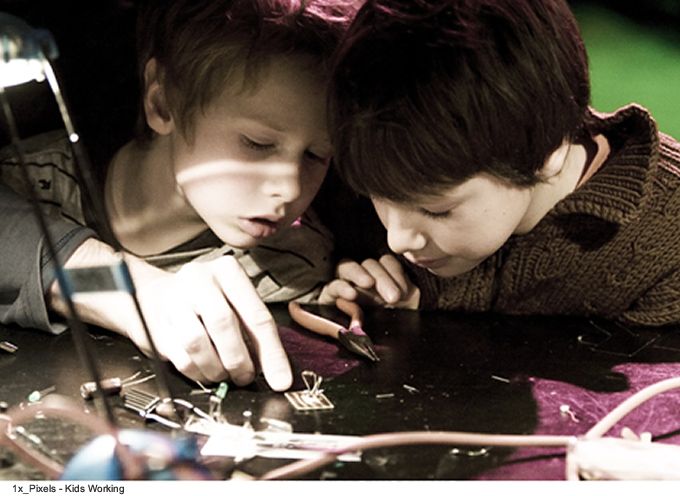 Serena Cangiano: So you invented your own systems and kits?

Marc Dusseiller: Usually we use kits that are already available on the internet, something that the DIY community shares for some time now. We do not actually invent anything but the important thing for us and to help people discover the creative side of technology. For example in the workshops 1x_pixel children work on an interactive work of art that is audio-visible, starting with just one pixel, in this way they learn what a pixel is by manipulating an electronic circuit, a microphone and audio amplifier that controls the LED RGB.

Serena Cangiano: So you are specialized in nanotechnology. Are you able to combine your specialization with the artistic practices based on the DIY?

Marc Dusseiller: I did a masters thesis on nanotechnology and material engineering at the ETH in Zurich. I tried to apply my knowledge of the DIY and the knowledge in SGMK, combining them with biological science. This is where my interest started, for example, an independent project Hackteria, developed with Andy Gracie and Yashas Shetty after a meeting at the Interactivos workshop organized at the Prado Media Lab in Madrid.

With Andy and Yashas we started working on the organization of the workshop that would be oriented on divulgating the artist techniques in bio art and this allowed me to create a point of contact between the activities that I do at the SGMK using my scientific background. The question that pops up is about the Hackeria project is, how can you use micro organisms and bacteria in a artistic way? This type of question implies that artists must be informed and educated on what bacteria is before being able to work on scientific projects.

After this starting point, we tried to combine this question with the practices typical of DIY: I started to work, for example, on the manipulation of a webcam that costs 10 dollars for the creation of digital microscopes that cost very little, therefore working on bio electronics for artists. Bio electronics for artists in this DIY project has to do with the possibility of building a living microscope to electronically control the bio system, or vice versa, get that biological system to control another system, like a sort of interactive work of art where the subject of the interaction is not a spectator, but a microscopical animal. 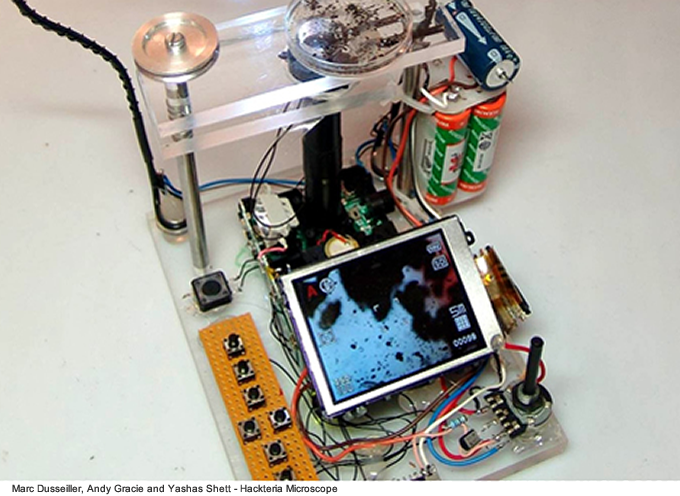 Serena Cangiano: On the net I saw some pictures where there are several people putting together and manipulating circuits in the middle of fantastic natural landscapes. What does DIY have to do with the white sandy beaches in Indonesia?

Marc Dusseiller: I travel a lot to in Asia and Indonesia. I have also been in Taiwan and Hong Kong for DIY workshops. In Hong Kong for example, you can find markets in the middle of the street full of technological leftovers, LED, electronic gadgets that all cost very little. Over there it very common to build home made technological systems but the real artist touch is missing. They know media art very well however only in its antique form, based on gigantic interactive facades and audio visible projections.

I think that the workshops that I hold in Asia and Indonesia are very interesting because they have this particular need of learning everything before dedicating themselves to an electronic bricolage. They like learning before doing, but when you actually work on these projects you never know what you are going to end up with. So when people ask me what I’m working on I tell them that I have no idea, I’m just trying!