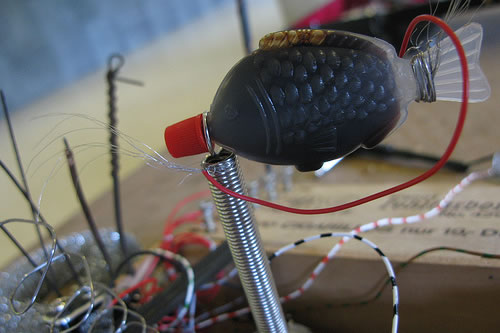 On the 16th of August Haus der Kulturen der Welt in Berlin hosted the presentation of works created during the course of six days of intensive workshops within the Sommercamp Workstation project, an event conceived as a mobile laboratory for art and media, which came about from the very important experience of the ex-research centre Tesla Medialab (www.tesla-berlin.de), a project that lasted four months and was situated in various places in the heart of Berlin.

The workshops of the first part of the project, Sommercamp, were developed on three themes: simulation and representation systems; the development of musical instruments and the procedures to create and organise cultural projects. The first, managed by Martin Howse, showed some examples of simulation: from the graphical work by Jessica Rylan, to the botanical work by FOaM/Nik Gaffney and Dave Griffiths, to the urban work, sensitive to electromagnetic landscapes, by Martin Howse/xxxxx and Julian Oliver. The second, managed by Derek Holzer, presented different approaches to the construction of musical instruments: from the antennae by Ciat Lonbarde/Peter Blasser, which produce sounds by reacting to the movements of the people present (principally based on Theremin); to the particular string instruments by Halldor Ulfarsson, focusing on the production of feedback; to the acoustic laptops by Tore Honoré Bøe, described by the artist as being “Social Sculptures”. The third theme, managed by Medialab Prado from Madrid, saw James Wallbank and Jordi Claramonte stimulate a critical and creative approach to the concept of medialab and operative art whereas Adam Hyde illustrated how to develop FLOSS (Free/Libero/Open-Source Software) manuals in little time. A detailed description of the single projects can be found on the Wiki pages of the Sommercamp Workstation. Sommercamp, as well as using the Haus der Kulturen der Welt, also used the structures of the Radial system for the inaugural event. On that occasion Zoviet France, Matt Wand and Atau Tanaka showed their reinterpretation of Variations VII by John Cage.

Workstation on the other hand will be the second part of the event, mostly dedicated to the production of projects (four artistic residencies and a curator fund), which will be open to the public from the 20th to the 22nd of November at the General Public in Berlin and will see the presence of the artists with their projects as well as experts of scientific and technological fields.

This is a delightful chat with soundartist Derek Holzer (a old friend of Digicult, who Claudia D’Alonzo met for Digimag31 in February 2008 for his project Tonewheels with Sara Kolzter – http://www.digicult.it/digimag/article.asp?id=1111, but that Bertram Niessen also met for his wonderful project of sounds and architecture and urban spaces, Tuned City, for Digimag36 in July/August 2008 – http://www.digicult.it/digimag/article.asp?id=1251), whom I thank for the time he dedicated to this interview, which was an opportunity to discuss the origins and operative strategies of this project.

Valeria Merlini: Where does Sommercamp Workstation come from?

Derek Holzer: Sommercamp Workstation comes from the experience of Tesla, the historical Berlin centripetal medialab, for the development of multimedia and technological projects, located in the Podewils’sches Palais. Within that structure, the presence of Tesla was too close to the management of the Podewils’sches Palais, having met with its “conservative” politics a few times too many. On various fronts, it became difficult to create projects in that place. For other reasons, Tesla could not have a great audience at its events. The city, which had funded the project, after having seen the low number of attendance, did not renovate the contract once it was terminated. Tesla thought of asking for less money by no longer using that structure; but the money and that location were connected. It was impossible therefore to separate the two. As a consequence Tesla did not die in any way, but a structural support was missing as was a location to do things in. From there Carsten Stabenow, Carsten Seiffarth and other people got together to make the organisation DOCK. The idea that was behind DOCK was to not search for a new physical place as a base, but to create events using different resources that already existed in Berlin. The idea behind Sommercamp Workstation, therefore, it to unite different resources from different people: to invite people to present workshops as well as other people to participate in them, creating a social environment.

Valeria Merlini: Is this strategy, that was thought up to get around the difficulties imposed by the cultural politics of the local scene and to make certain artistic practices possible, do-able in Berlin?

Derek Holzer: In Berlin it is not necessary to have a physical location, because there are infrastructures everywhere. Last summer for Tuned City the same nucleus of people used the infrastructures of the Technical University, many public parks and the big Funkhaus Berlin studio in Nalepastrasse, therefore existing structures. At this time everyone talks about being eco-friendly, about renewable stuff and it’s such a waste to set up a new place every time. It’s more sensible to take existing resources and connect them intelligently.

Valeria Merlini: What does medialab mean to you?

Derek Holzer: When I lived in Holland I tried to make a medialab. I find the idea of a medialab connected to a fixed place is a bit archaic, a bit dated. Personally, I don’t want to criticise other forms of practice in medialabs, but I’m very interested in transitory situations. I’m interested in creating multi-use areas that are quick and temporarily autonomous. In creating a transitory situation like “let’s do something quick, in on week”, you must not worry about the problem of being continuously eco-friendly or about long-term issues. For example, in the 80’s there were many initiatives, now they have stopped and they keep sucking up locations, money and oxygen. I’ve seen a lot of situations like these and they bore me, as well as being a complete waste. I believe that to create temporarily autonomous situations is more exciting. It’s a way to use the best elements of existing organisations, to take portions of them, configure them and make the next step.

Valeria Merlini: Do you think that the example of Sommercamp Workstation can be exported?

Derek Holzer: Yes. It’s a finger that points in a certain direction. I think that every local situation is different. It could be interesting to talk about it with people from Medialab Prado for example, who seem to have been organising many events of this kind for many years and in different ways. They have a different culture, which is heavily based on volunteer work. They put together a lot of people to work on specific projects. It’s kind of the opposite of here: the artists go to someone in order to create something and all the technical volunteers are involved in the project. Here we invite artists and technicians and then people come to learn from them. Perhaps that kind of situation works well in Spain, in that specific cultural context. I believe that there’s no crystal ball that works everywhere, every situation is different and you cannot simply try to copy it, paste it and export it. I don’t want to criticise Dutch culture, but their tactics in dealing with media are to export it everywhere: it’s like a flyer stuck to every culture that they can put their hands on.

Valeria Merlini: Compared to the construction of analogical and electronic instruments to the detriment of an excessive and limited use of code and software, how did you apply your ideas and your knowledge to your section of the workshop?

Derek Holzer: In reference to the section of the workshop that I managed, I can say that the construction of a physical object is very different from programming stuff with a computer, because programming isn’t visual, no one sees it, it’s totally imaginary. In fact it doesn’t even exist. If you build a physical object in order to create sounds, this becomes a sound instrument, but also a visual instrument. I believe that the pleasure that people have had from Acoustic Laptops, Deerhorns and Hallodrophones is more in the visuals than in sounds.

Valeria Merlini: What did you expect from Sommercamp? Are you satisfied?

Derek Holzer: My objective was simple. I wanted to have a lot of people who shared the same space, that did things creatively with their hands and that had fun in doing so. I didn’t have great expectations. I didn’t expect to see works of genius and of course there were good moments, because pleasant things came out of it that I didn’t expe.