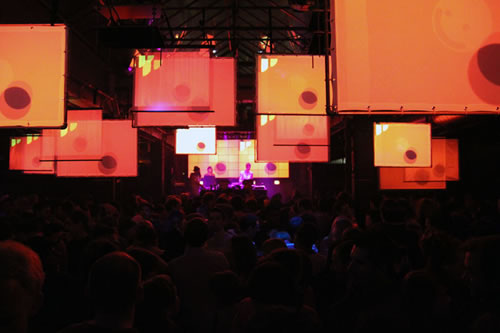 The last Mapping Festival edition took place from the 8th to the 17th of May in the fervent city of Geneva . Focussing above all on visual aspects, this festival is different from the many others of electronic music which animate the Swiss city. Also this year it confirmed to be not only an incredibile showcase fot the vjing international scenery, but also an evidence of the real Swiss style in regard of technical organization and rich program.

I could happily take part as artist in the first festival day and I remained open-mouthed in realizing how the developers of Module8 are the same infallible event organizers able to successfully manage such a rich festival all over Geneva citycentre, using many different spaces including the Bâtiment d’art contemporain, the Galerie Labo, L’écurie, Le Cabinet, Le Spoutnik, and Le Zoo / Usine. Focussing on vj’s needs  from the constant presence of technicians to the careful chiose of headlights and mixers vga  is an accuracy which can be managed with such sensitivity only by people who has already stayed on the other side of the consolle. In other words, Mapping is a festival for audiovisual vjs organized by vjs, and the difference stands out a mile.

On Friday night, it hosted some of the most interesting woman artists working in the audiovisual field, with particular care for projects quality and variety. The night was opened by the Laptopurus project, i.e. a completely female platform created and supported by three women with a great organizational talent: Maite Cajaraville, Shu Lea Cheang e Blanca Regina. During the winter of 2008 they engaged in this international project which aims at taking on the ring woman vjs from all over Europe . The meeting was presented in Geneva for the second time, after having been organized in Paris during the exhibition Visionarre. It aims at bringing this funny and curious battle in the different hosting festivals, making invited vjs compete with the local ones. It is very easy: suffice is to join the competition and challenge the profis.

The privileged guest at the festival was the Berliner Soniriot , who competed in the battle with a very original set in whicht graphics and pictures melted with a cyber punk but at the same time humorous look. All resulted in a show full of adrenalin in which different vjs challenge one another in “one to one” battles and the public voted live electing the protagonist of a real ring with ropes and maxiscreens all around.

The extraordinary Genevan Zoo Club , famous for a long time for its clubbing activity, was the ideal location for this show and for the festival night life, thanks to a formidabile audio system and more than 16 screens. The club is a real self-managed centre with a bar, a cinema, a concert hall, a restaurant and bedrooms for the invited artists: no better location for a wellcoming and at the same time technically perfect audiovisual festival.

Raquel Meyers is instead a Spanish artist with a really incredibile talent, who lived in the last years between Bilbao and Madrid and has recently arrived in Berlin. Raquel took part in this festival edition with her newest set which joins the 8 bits aesthetics with foto-animation, creating a really uncommon narrative and visual pathway. During her career she created videoclips and vj sets for many of the most important 8 bits artists all over the world, among them Glomag, BubblyFish and Goto80. She was also part and parcel of the group ENTTER. In the last years she attended many international shows like A maze Festival. Transmediale (de), Matadero Rec (es), A, FIB Heineken (es) and she has also been hosted in centres like the Namsan Drama Center (ko), LEV (es), Laboral centro de arte (es) , La casa encendida (es) , demonstrating to be one of the most interesting artists in the European 8 bits scenary.

On Saturday there was the exciting Modul8 workshop which is the real festival meeting point. Later on the festival moved to its second location, the Batiment d’art contemporain , where people could enjoy and play with the irresistible Reactable . They could then assist to the concert of The Proteins (CH) , who stired up everyone with their strong rock’n’roll accompanied by an elaborated video installation realized by Klif (CR).

On Saturday night the privileged guests were great names coming from the Kompact world, i.e. Burger/Voigt live set , Tobias Thomas dj’s set  he is a historic member of the stable from the early ’90s  and the two vjs from Bruno Tait’s and Okinawa 69’s school . A showcase with an incredible teutonic, plain and faultless style.

During the long festival week, the Mapping stage hosted also artists like The Bug, Videogeist, vJ aNYONE and many others who gave a complete overview on the Modul8 software world, which changed the life to many vjs and mac users. It would be very nice to tell you what else happened at the festival, but we prefer to leave you with a little bit of curiosity. So, visit the Web site and don’t lose the next Mapping Festival edition: a Vjing festival with very few equal.