The Sonic Orgasm Of Claudio Rocchetti 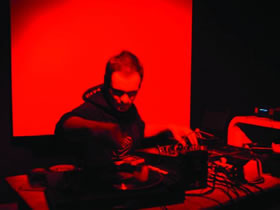 For some time now Claudio Rocchetti has been one of the most active and interesting electronic musicians in national and European scenes: be it because of his research on sound, as an emotional and compositional element, but also materially on analogical and electronic instruments, or because of his technical, improvisational and expressive capabilities be it in the studio or live, and the tight net of collaborations and participants active between Bologna and Berlin.

I had the possibility of listening to and “seeing” Claudio Rocchetti live many times during the past few years, be it solo (which is perhaps the most exposed, impressively fragile and moody version of his music), or in his three parallel projects: Olyvetty, a live audiovisual improvisation project in collaboration with the video artist Riccardo Benassi, born from the crib of Netmage and Xing, 3/4 Had Been Eliminated in collaboration with Stefano Pilia and Valerio Tricoli, which in the course of this interview Claudio will describe as his ” research project on a solid and heterogeneous sound nucleus”, capable of moving with equal confidence between contexts of contemporary art to festivals to social centres as long as they can perform with the right care and attention, and finally, In Zaire, in collaboration with the duo G.I. Joe.

It is from this last project that the roots of this interview sprout: In Zaire is in fact the latest project developed by Claudio Rocchetti. They have yet to be released on any formal publication, and before the 18th of April at Cox in Milan in the Exploding Cave event, In Zaire hadn’t even had many occasions to play together on a stage, from what I know. I don’t know if it was because of the freshness of a project so recent, or the alchemy that is created at times between artists, I don’t know if it was the technical abilities of the three elements (guitar and drums from G.I.Joe and electronica by Rocchetti), or the project itself, perhaps the sum of all these things: but In Zaire were the most spot-on challenge and successful cultural discovery at the Exploding Cave.

The addition of the visual element of In Zaire’s concert, directed by Virgilio Villoresi, added that touch of research on image, of uniqueness of the work of research of sources and live analogical systems that were absolutely unique and distinguish the work of this young director and video artist from Tuscany. Considering that Claudio Rocchetti and Virgilio Villoresi, even if they have been friends for a long time and respect each other, had never had a minute to rehearse this audiovisual show; this live that was created was surprisingly one of the best moments of audiovisual synaesthesia and aesthetic research that I have witnessed in the past few years, a flow of sounds and images that were never banal for almost 40 minutes of performance.

A truly and totally improvised live performance, be it in terms of sound and their integration, a confluence of talents and intents that, against the general scepticism that surrounds this kind of curator “operation” based on putting together and improvising, shows that perhaps the synaesthetic languages of the rapport between sound and image, must begin to move towards new fields of investigation, less pre-constructed by software or digital technologies. In sounds terms, they seem to be dictated by the difficult co-penetration between electronic, digital and electric sounds. Claudio Rocchetti seems to have understood all this for some time, as many others seem to have understood it, a number of people that is sufficient to build a national “movement” that in my opinion represents one of the most original stylistic numbers produced in our country in recent times .

Marco Mancuso: First of all I would like to know more about your training and your current activity. When did you discover electronica and what are your projects that you are developing right now, including solo projects and your collaborations like Olivetty, 3/4 Had Been Eliminated and now In Zaire

Claudio Rocchetti: As for many people of my generation I began playing in various hardcore groups (bass and guitar), around the age of 13, until I was 20. Then I stopped entirely for a while, concentrating on organising concerts and other things, but without ever even picking up an instrument. When I was about 25 I discovered DJing, in Bologna, and expanding the technique of turntables I managed to go back to my instruments with which I had begun. This was fluid and without any kind of project: like now, I discover a genre, a technique, and I incorporate it into my experience, but without traumas or radical decisions, it’s all assimilated and sedimented in time. In this way my collaborations and various projects move too. It’s a flow from one musician to another, from one sound to another, where the precedent is necessary for the future, and where the last one shines new light on the previous one. OLYVETTY is the necessity to represent another dimension and to use languages that are unknown: 3/4HBE is a longer project, a combination of different characters and the research of a solid nucleus which is heterogeneous, whereas In Zaire is funk frozen in the contemporary, the tribal rhythm of our days.

Marco Mancuso: What are the differences in your artistic approach, in your work method and in your music research in these projects? In other words, what pushes you to research on the one hand the collaboration with a video artist (Benassi as Olyvetty), and on the other the collaboration with musicians such as Pilia and Tricoli (for 3/4HBE) and G.I. Joe? What do they give you and what do you give them?

Claudio Rocchetti: My basic approach remains intact in all my collaborations; the interesting element is that it is my own style that is forged by all the various collaborations. As well as learning from each encounter, I always try to impose my transversal gaze on the personal style of the other musicians, underlining and encouraging those that seem to me to be their peculiarities. For example, the singing and the shape of a song (even if de-natured) in the ¾’s, the obsessive riff and tribalism in In Zaire. Then there’s the choice of my space, of the materials on which I can work, etc. which is different in each project, but I believe that the fundamental aspect is this desire to listen and to put on show each single peculiarity .

Marco Mancuso: Your approach to making music is definitely very physical: on the one hand you use electronic and analogical instruments, that are far from the immaterial digital world, on the other hand you seem to search for a true and honest physical tension with your instruments. Do you think this way of approaching music, this tension which is clearly evident live, is fruit of your “being an artist”, or how you are and your passion, or do you think that there’s a will to research the expressive possibilities of analogical/electronic sounds compared to digital ones?

Claudio Rocchetti: It’s a combination between my path that I mentioned before (hc/metal/noise) and the will to not bend to the classical experimental live that you see nowadays (computers or digital machines). The fact of playing with these elements that aren’t instruments, but principally recorders and analogical reproducers, forces me to take these machines to their limit, to push thems beyond their possibilities. During a live set I look for a breaking point and a collapse in the instruments, I go round it and try to hold back at the end. I don’t always succeed, sometimes the concert ends because one part breaks or because I physically can’t handle it.

Marco Mancuso: This physicality is becoming your artistic number, most of all because it becomes a spectacular action on the stage. A performance act that translates into fights on tables with Benassi in Olyvetty or the sound orgasm in ¾ and In Zaire. How important is the performance/theatrical/ecological aspect in your projects and how do you relate with the other elements (and the audience) on stage?

Claudio Rocchetti: The physical/spectacular component is a constant in my live shows, even if with the ¾’s it’s very withheld, with Olyvetty it resolves in a dual and in In Zaire it’s like an explosive trance. I would say that it’s an element with the others when it’s withheld, implosive, be it when focused on direct conflict or when it’s induced by the rhythm and strength of the performance.

Marco Mancuso: How do you work live? I saw you on different occasions and with different projects and on stage you are always surrounded by instruments of various kinds. You don’t seem to have a standard approach to live sets and you don’t even seem to have a subdivided structure for each time and for each project; but I believe there must be a preparation on your part for the performance that is different in each project and evolves as you accumulate experience on stage. What instruments do you surround yourself with, what do you love playing and what path of improvisation ( and non-improvisation) do you move along during a live performance?

Claudio Rocchetti: It all began with turntables. Just two tables (without the vinyl) and a mixer. Feedback, rhythmic elements found around the turntable body, space and elements created with the mixer, etc. From a scarce starting point I began to add a pedal, a microphone and other things, but at the same time I took elements away. So even in this case you can say that my instruments are fruit of a slow process of sedimentation. The superficial levels are recent instruments, which work as “solo” elements, whereas the older ones, the turntables and mixer, are my backing band.

Marco Mancuso: The In Zaire live in Cox, confirms the optimum state of a certain kind of Italian music that translates in a communion of genres and experiences that go from prog, to free jazz, to post-rock to live impro and electronica. A scene that, thanks to some key elements, such as groups like Zu, Ovo, 3/4HBE8 to name e few, or labels like Wallace and Bowindo, is being recognised and appreciated even on an international level. How do you perceive this moment, from what origin does it spur from and most of all do you think that it’s still in evolution?

Claudio Rocchetti: I don’t know if there’s a scene as such in Italy, even if I can say that there is surely a common feeling and will to do something that in reality to me seems more interesting than a “simple” scene. There are many people who, in my opinion, can identify themselves in a common past in DIY and HC, but who today work in different situations and environments. There are connections and bonds between genres and places that until a few years a go were simply at opposite poles: for example labels like Second Sleep, Holidays, Troglosound have their recognisable peculiarity and could seem very different, but are fruit of a similar feeling that lead them to crossover and collaborate with each other continuously. The same can be said for places like Xm24, Codalunga, Dauntaun, they all come from different situations but are all part of this seed that is evolving and mutating.