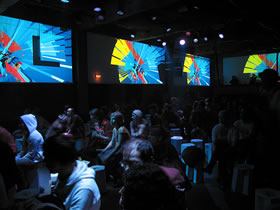 Jan Rohlf is a young artist originally from Tübingen, who from 1994 lives and works in Berlin . Jan in mainly a visual artist, but he is also engaged in various collaborations and cultural projects. Together with Oliver Baurhenn and Remco Schuurbiers, he’s co-founder and artistic director of ClubTransmediale – International Festival for Adventurous Music and Related Visual Arts (CTM).

In 2005 has also founded DISK  Sound & Image Initiative e.V., an organisation devoted to the promotion of experimental art and music. Another project of international resonance that involves Jan is the creation of the global network I.C.A.S.  International Cities of Advanced Sound, an organisation that gathers the artistic directors of numerous festivals dedicated to digital culture, which aims to create sustainable structures in order to offer a platform for the exchange of ideas and projects, critical reflections, co-productions, and to promote collaboration.

I have met Jan during the latest edition of ClubTransmediale, and before starting the interview he showed me his installation “INDEX I & II” at Kunstraum Kreuzberg Bethanien (KKB), one of the venues of the festival. The installation consists of two illustrations, which represent two Berliner music collectors. Jan meticulously portrays the two subjects through the graphic representation of the respective music collections, one is entirely digital with a laptop and an iPod, the other relatively analog and more variegated, with vinyls, cds, and books, in this way Jan re-constructs the personal histories of the two subjects and offering meantime a view of the city of Berlin . Furthermore, next to both illustrations there are two booklets that catalogue each collection, offering extra information about the subjects.

Donata Marletta: What is your background? How did you get involved in the scene?

Jan Rohlf: I’m a visual artist in the first place, and in the early 90s I started working in nightclubs, as many others did. For me it was more than earning money, I really liked the social quality and the artistic stuff I was experiencing in these surroundings. I have been interested in music since I was a teenager, I was also visiting the Transmediale festival, which at that time was still named VideoFestBerlin, and I found it quite inspiring. Some friends of mine were working there. During the mid 90s some things came together, in the 70s and 80s we had industrial music and other music styles that were primarily focussing on sound, like Kraut Rock, Ambient etc., and since the late 80s we had techno music  then in the mid 90s techno and post-industrial/ambient music merged into what it is called “Sound Culture”, as a consequence the question for listening spaces became quite important. In this moment we were thinking of how to transform what we had experienced in the club into something available to a different public.

Some people opened up factory/loft like spaces that displayed art installations, and where people would be doing live music, sound-scapes; these were small events where approximately twenty people were attending. Myself, I started something similar in my studio, which was quite large, located in an old factory. I made a listening room where I invited electronic musicians, and I was creating scenarios at the interplay of sound and image. Music became committed with media, and it was something new for us. Then there was this moment, at the end of the 90s, when the VideoFestBerlin changed its name to Transmediale, and the organisers publicly said that they wanted to cover the whole range of digital media and electronic culture, and I thought it was a good idea to integrate also electronic music. After that I went to see and talk to the organisers through people I knew, and I proposed that I could do something similar to what I did in my studio, the listening lounge for experimental music crossed with kinetic and video art. This way I could step out from the traditional stuff and propose something more informal. They said it was a good idea and offered a space, the problem was that I didn’t want to do it in that space and they had no money to provide a new space for us, so I asked some of my friends for help, and actually Marc Weiser of Rechenzentrum, who was doing the music booking for Maria am Ostbahnhof (MAO) at that time, was really supportive, and thus we started to do something there. This is how I got involved, and this is also the starting of CTM as a parallel festival, but at the same time independent from Transmediale.

Donata Marletta: Which are the main objectives of CTM?

Jan Rohlf: At CTM we try to do something more than just producing a quality event, this philosophy was clear since the beginning. The aim of the festival is to create a space that it’s in the middle, in an indefinite grey area, where everything is possible, and that allows people to sneak in and take a look at what’s going on. We want to create a social space that may allow music producers to have an alternative access, and at the same time to offer this access to the public. Another aim of the festival is to give shape to a certain kind of communication, for me a good festival should provide space and freedom to transgress the traditional cultural models, and should not make restrictions, giving to the public the chance of liberating themselves, escaping from the everyday routine.

An example is what happened in this year’s edition during the performance Unicorn Man by the artistic group from Detroit Princess Dragonmom, at some point it appeared a cardboard unicorn, and the public was very curious and started to interact with the object, jumping on it, playing with it. It is important to give toys to the public, also giving the opportunity to interact with the space. For this year’s edition, under the theme ‘Strucutres’, we have created cardboard stools that people move through the rooms, creating dynamism within the venues’ spaces. The selection of space in which the festival takes place reflects this philosophy, the space for me must give the opportunity to be enjoyed, and it should be a bit messy, without strict rules to follow, and in this sense Maria am Ostbahnhof and the Kunstraum Kreuzberg Bethanien reflect this idea.

Donata Marletta: What is the main difficulty that you encounter during the process of setting up the festival’s programme?

Jan Rohlf: For the selection of artists we try to create a balance between the quality of performances, and giving the chance to the public to have fun and dance, in particular during the week-end. When we select the artists obviously each of us curators want give his contribute, according to personal artistic taste; also we want to present recent productions in order to reflect what is going on at the moment in the musical and artistic scene. I particularly like to create a thread with the past, with the avant-gardes; this is why we often present the works of those who are considered the pioneers of electronic music. For instance during the edition of 2008, under the theme ‘Unpredictable’, we invited Pierre Henry, one of the most renowned exponent and founder of Musique Concréte. This thread with the past aims to offer to the new generations something more than the traditional club night.

Finally we launch a call for entries, which offers a view on the young artists, giving them the chance to present their projects. Then we arrive to the final line-up through a complex process of negotiation; in general we try to avoid what many festival do, especially the outdoor summer events, that is, putting together a certain number of successful artists, without any proposal, without any conceptual idea.

Donata Marletta: Every year CTM proposes a theme, I was wondering if the series of these themes creates, year after year, a kind of narrative

Jan Rohlf: To be honest the themes are not strictly connected one to the other, and thus there is no clear narration, for example, during the edition in 2006 the theme was ‘Being Bold’, theme to which I particularly care, and was about the individualistic positions of many artists, being bold means also being brave, so “do whatever you want no matter which consequences it entails”. In 2007 we had the theme ‘Building Space’ that was concerned with the idea of space that allows experimentations, and offers new ways to communicate. The theme ‘Unpredictable’ in 2008 was about loosing control, about the unexpected , which alter the dynamics of creative processes and conduct to the discover of new aesthetic forms. The themes reflect the different perspectives of who produces music, thus maybe it is a form of narration through the editions that tells the history of ten years of CTM .