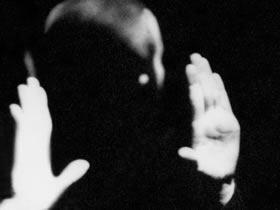 Debord writes in 1967 in his masterpiece “La Société du Spectacle“: “le avanguardie hanno un unico tempo e la fortuna più grande che possono avere è, nel senso pieno del termine, quella di fare il loro tempo.” Babilonia Teatri, winners of the Premio Scenario 2007 with their latest theatre performance “Made in Italy”, enter the Italian performance scene from the northeast and rightfully occupy the post-vanguard scene. This young group from Verona emerges from a concept of performance that speaks about the war in Iraq , and it conceives of a different type of theatre that looks at the contemporary.

In 2006 they get into the finals of the Premio Scenario Infanzia with Panopticon Frankenstein, devised by Valeria Raimondi and Enrico Castellani, the group’s founders, directors and performers. Already at that point they manage to get straight into the hearts of teenagers through the result of the work they conducted in the Montorio prison of Verona , by confronting them without hypocrisy with harsh socially engaged topics.

“An actor welcomes the audience: he is a seductive, fascinating and provocative character. The music is deafening, violent techno, the lights are psychedelic and disorientating. The teenagers are asked to put themselves around a multi storey tower-structure which is the centre of the performance. The actor is the guardian of the tower. He shows himself and reassures the audience. [] The audience sits at his feet, it is under control. Three platform-cells, located at the three angles of the triangle inscribed in the circle formed by the audience are under control. The actor dances. Sings. He provokes the public. The tower is not only a club-cell: it is the centre of the Panopticon, the circular prison devised by Bentham. [] Another cell: the real story of Beauty, an ex inmate we have worked with for two years, who run away from a land where she grew up like a servant and found herself in a land where she has encountered first the street and then the prison. Another cell: Badre’s story, of his 21 years and his 5 birthdays celebrated in prison: another inmate’s voice and actor’s body. [] The man of the tower, with a video camera in his hand, starts filming the audience that is projected in the cells. On the tower and everywhere. Alternations of quick pans and narrow zooms. Deafening music. Hysterical lights.” (from Premio Scenario Infanzia 2006).

Next comes a performance that photographs the ambiguous and insidious situation of work precarity, Underwork, where the scene develops on two parallel tracks. The first one is the dimension of ‘lazing around’, symbolized by bathtubs, and the second is an incisive recitative that is almost filled with rage, it is direct, hopeless. On one side thus we have the music of Liza Minelli singing the famous duo ‘Money’, and on the other side, opposed, a bare but incisive acting, that sees the actors standing on the stage with their eyes fixed on one spot, while they recite minimal but direct sentences: “we are broke ( green )/green hope/green rage/green mould/white red and dark green’. It’s poetry without rhymes, paradoxical but truthful situation, dramatic irony and modern impotence. So off it goes, it begins with the three actors standing like robot-soldiers of an army that repeat a litany, almost in an attempt to convince themselves to convince us. The synchronicity is perfect, just like the physical and psychic seriousness. There are a series of sentences in which the words “work”, “under”, or “discharge” have an enormous social significance, just like “parasite” or “plague”. Fortunately the music provides some levity, together with the ballet that takes us to the tubs of wellbeing. Baths in the water and sweet sensations.

The three actors celebrate with Champagne and glasses, and they swing between exhausted soldier and exasperated holiday modes. Frenetic rhythm. Great intelligent mix of double entendres and of historical-ironical phrases said without thinking about it twice like ” ’68  boiled donkey” or “full streets  full balls”. This everyday that hypnotizes us and that enrages us to the point of ridiculing us is a cruel and wicked discourse, both at home or on stage. They scream the truth, out everyday condition, and the laws in the tubs seem to ridicule us even more. Can we minimize? No, miserable and facetious, sarcastically enraged. Suddenly coins fall from above, almost to rescue us, there is a rush to pick them up,the song Money sets the pace for the entertaining choreography, whilst in the background a strange watering takes place. End of scene. We start again with another monologue, this time with the Cinese, the study, the CV, and “we’ll let you know”: the degree and ingredients for a bomb-cocktail, and again the problem of the yellows that is interrupted by a “we can give more” We get to the phone and it’s all a coming and going, a web, running and speaking on the phone, between the water’s socks and tubs, up to the scene where Father Christmas (the fourth actor) enters with the notes of two flutes to fulfill improbable wishes. Enter chickens, they leave again, and from the tubs, like zombies, the three performers emerge completely wet to scream again, this time with no interruption. A pumpkin falls, it breaks and they start eating with napkins and forks. Applause.

This performance won the Premio Scenario 2007 with this explanation of the jury chaired by the director Roberta Torre: “The Italian North East depicted as the factory of injustice, vulgarity and hypocrisy: extraordinary producer of stereotypes recited like litanies, and of family models inspired by the holy family but filled with media idols, intolerance, fanaticism. [] Simple but effective verbal strategies that make one laugh and a perception of non sense, in a work that wisely conjugates interpretative stylization and gesture paroxysm. With an unforgiving description of “holy” football fanaticism and of emphatic and patriotic play-by-play, that are normally rendered imperceptible by our general addiciton to them. It is a piece where taboos and restrictions are confronted with intelligence and lightness, and that produces a theatre that goes beyond ordinary schemata and conformism.

“Made in Italy” does not tell a story. With irony, sacrilege and caustic humor it deals with the contradictions of our times. The performance proceeds through accumulation. It photographs, condenses and engulfs all that surrounds it. The continuous messages that reach us, the need to catalogue, file, put everything in order. It works through combinations , intersections, shifting of meanings. The scenes do not start and they do not finish, they are constantly interrupted. They are bitten apart. The images and the words are born and constantly die. The actors do not act. The music is always present and it dictates the logic with which events happen. Like in a video-clip. Made in Italy is a mess of words. It’s a mess of luminescent tubes. It’s a mess of icons. For a pop theatre. For a rock theatre. For a punk theatre. It’s a theatre that is full of inputs and images: it is overflowing with suggestions, but empty of solutions. (from Made in Italy , Babilonia Teatri, 2007).

This is the new Italian Theatre, more alive than ever, more evolved than ever, and it comes from the provinces, in this case from Isola Rizza, Verona . I could give thousands of examples of “new wave” revolution-performance groups that are born in small towns, in abandoned churches, in utility rooms or in village theatres from where, between passion and competence, they go to the conquest not of Italy but of the world. We are Italians, adaptation is our strength, to amaze is our way of being. The Babilonia are not afraid, they are not reticent, they leave know territory and they re-mix, they are horizon and reflection, rupture ad provocation, conference and tract, maybe ‘preaching’ and presumption. Nonetheless everything has a logic, from the position of the bodies on stage to the rhythm of the spoken word, from the scene to Valeria and Enrico’s palpitation.

Everything flows when the two blurt out that we have a Pope but we also have the universally used sacrilege, from Croat to Russian, when they speak ‘their’ Nordic dialect to disparage migrants, when they go to get a pizza, when they become intolerance and racismFucking Arab or Dio Can. New scene. Staging of a nativity scene, baby Jesus and the comet. Pop music and bodies that dance, lick, touch themselves and their genitals, and here Enrico gives everythingmask without a costume, modern juggler, gentleman dramatist. Again the two of them in front of an execution, light in the face, name and surname, seeking A.A.A., Italian or from Padania, virtual sex, peasants or southerners, let me sing a song, soft, good morning Italy, good morning Maria. In front of the luminescent Italian perimeter pieces of white, red and green paper fall, Champions of the world, and Enrico exults, ropewalker on the stage, exhausted performer who lays down whilst Valeria sweeps the floor.