The Revenge Of Nico & The Vascellaris 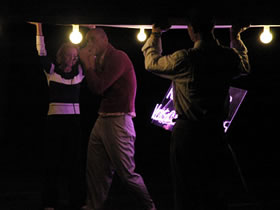 He’s from Vittorio Veneto the most interesting, charismatic and eclectic thirty-year-old of the Italian art, and he never failed. Nico Vascellari made his name at the design department of Fabrica and at the Superior Course of Visual Art of the Antonio Ratti’s Foundation to turn into the winner of the International Prize of the Performance of Trento .

He attended the Italian Academy at Columbia University and will be artist in residence with scholarship at the American Academy of Rome . The winner of the 2007 Prize for the young art is a musician, as front-man of the With Love , underground group part of the noise punk movement, but most of all performer that interacts with several language codes, from photography to design, from body to video, from music to installations. His polyhedral research always foresees an exhibition space, a public and a non-indifferent tax of improvisation and creativity, a new and suggestive energy that always and however communicates.

Themes of his works go from relation with nature, infinite source of inspiration, to camouflage with eccentric dresses and costumes, real skins and new mental identities that draw on his own -maybe teenage- imaginary, to original and rule-breaking videos and happenings. So here’s Nico during a metal concert appearing from the crowd with a little camera, recording a reality near to him. And now Nico on a forge of trunks, with musicians Stephen O’Malley and John Wiese , playing and singing accompanied by the rhythm created by the lumberjacks that sharp timbers. Alpine procession or esoterically ritual? He’s now mixing different media, cutting a thousand of Kate Moss images and all the eyes inside the last Vogue America , proposing them obsessively in the same position on a white paper.

This is Nico Vascellari , inexhaustible artist, that turned his world into art, his nature into aesthetic, multi-visual and global experience. He brought the Social Centre to the maximum artistic level, his yells to be listened inside the Art Galleries and Festivals. His movements stagger the embarrassed public, astonishing the art system, now as never opened to the novelties, to the total. The personality of his style impresses such as his conviction that underground art is now free from priggishness and hypocrisy, such as his unnatural and coherent tenacity not to exclude anyone as protagonist.

He’s born from music and music is the beginning of his art without obstacles. A digital Beethoven, if you want, not without a Mejerchol’d, an electronic Picabia not without a Kaprow. Acoustic art on stage, performance sound. Singing evolution and concert re-definition. New listening, new efficient and penetrating sensibilities. Sine-acoustic representation, score of the happening and mobile installation.

Revenge is his last work, an artistic site specific project curated by Paolo Colombo and Monica Pignatti Morano, opened to the public from 10 th June to 21 st November 2007 at the Marceglia, outside the Arsenal of Venice for the Biennale . A seven metres wall plenty of amps from the different shapes and dimensions. Walls that bring you to the sculpture-performance room are made of wood, as the wall that sustains the amps. That faces toward, in an extreme dark and poetic gesture, a wall made of flowerpots identical to the Venetian ones. Everything sounds. At the centre of the room, a parallelepiped of wood sculpted in simple and once again gothic signs.

Revenge is a body performance, centred on an audio carpet with violent volume, executed only during the varnishing-day for the press in a similar space/three-dimensional sculpture. Nico comes from the top, from the peak of the amplifiers wall, with a rope. He arrives on the public and, tempted from flying, he decides to remain on the improvised stage (the parallelepiped) and scream his will to revenge . His entire imaginary is finally the prince and no more sans papier inside the social centres of the north-east, on time for the last hardcore concert.

Vascellari’s voice arrives at the mixer directed by John Wiese ( Los Angeles ), musician of the international noise scene ( Sunn O))), Wolf Eyes, Merzbow ). Wiese brings him back, to the same amps he has in front. Nico dances and screams for some ten minutes, inebriated by the public, on their heads, crashing on the floor. Lots of little pixies dressed like Nico sustain his microphone, dragging the thread behind his frenetic movements. During the performance, Nico often flies on the public, so that the second day part of the public stood far from the artist.

None of the soars has tragic consequences, some hurting noses and shocked misses. Nothing particular, Revenge is similar to a punk concert. The novelty is that Vascellari, with his t-shirts, videos DIY and underground experience can make his voice listened, and he wins the exposure inside the maximum art temple.

Through Revenge an entire aesthetic and cultural scene is rewarded. Revenge is the triumph of the nerd aesthetic that rules inside tribes without government, that proliferate in Vittorio Veneto as well as in New York .