Vjtheory: Another Point Of View 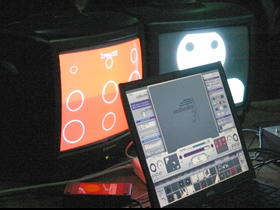 A research which starts from the more and more widespread need to think upon how sense is generated and the visual impact Vjing has, which is far more than the technical approach to the discipline.

The goal of this project is to gather articles, references and artistic projects regarding the work of the community which have joined the portal. The project is a constant work in progress, thanks to the chance users have to add their contents and to the organization of the team behind VjTheory to stimulate discussions and reflections on the topic. A multimedia structure created to support participation, which let his audience in thanks to means such as calls and chats, which in the last months has given birth to real philosophical brainstorming on the possible theoretical implications of Vjing e Real Time Processing.

Silvia Bianchi: First of all I would like to understand better how and where your project started

VjTheory: The original idea for the project came from the Narrative Lab workshops at AVIT (Brighton in 2002 and Birmingham in 2004) where Brendan presented some ideas and organized workshops where participants could present ongoing work. A lot of good ideas were debated. There was also an obvious need for written texts which would inform VJ practice and related issues, from a philosophical and theoretical perspective. Some of the people involved were students trying to feed their practice as VJs into their studies, some others were practitioners interested in reflecting on their own and similar practices. They would struggle to find written documentation to support and refer to. This also became apparent in the college where Ana and Brendan teach and in their own work.

From there we sent out a call for papers in June 2004 to compile a collection of texts into a book about VJing and realtime interaction. This turned into a website and the website grew to become as important as the book. Now we have a growing community, discussing theory, philosophy and ideas, active in the development of the website.

Silvia Bianchi: What’s the first aim of your project and how do you work for the creation of the site?

VjTheory: To have an arena for people to come and look for texts, to publish their texts and participate in the events we are organizing on a irregular basis, both online and offline. We would like to motivate people to reflect theoretically on their practice. There is a lot of work being done and VJing is so diverse, but there is not a language that is unique to it or a vocabulary. There is an immense diversity of approaches to this practice and we hope something relevant in the equally diverse theoretical and philosophical approaches is being developed.

From the first day we put out a call for papers we received contributions; people were participating enthusiastically since this very first approach. From here on we have received a lot of papers and have been invited to talk about the project at festivals and conferences. We are always looking for ways to expand our community (and the other communities it links) and helping to establish collaborative working through the events we are organizing and taking part in.

Silvia Bianchi: Which part of Europe has been the most active in the discussion so far?

VjTheory: You will find the biography of the main contributors on our website, but there are a lot more people contributing in informal ways, with their ideas and support which, because they haven’t published or contributed anything visible, don’t have a biography on site. In saying this, we try to acknowledge everyone as much as possible. We have received contributions from every continent except Africa. The most active contributors come from North and South America: United States, Brazil and Canada. From East and West Europe: Belgium, UK, Spain, Italy, Germany, Portugal, Holland, Croatia, Slovenia Switzerland, etc.

Silvia Bianchi: Can I ask you what kind of feed-back you get during the latest chats and how the realtime interaction for philosophical discussions works?

VjTheory: Do you mean the Let’s Chat sessions? These chats were a starting point that brought to the surface a lot of interesting questions for debate. The moderators of each chat and the other participants didn’t necessarily head in the directions we expected them to. We got a lot of people sending us e-mails saying they would like these debates to carry on, and this is what we have been looking at as a future project. There are a few people to whom these chats were just a start for something more serious, a paper or an art work. The unexpected is a major feature of realtime. We didn’t know who and how many would turn up to these chats and neither did we know where they might take them. This produced interesting new perspectives and possible collaborations, between us and other people and between the participants.