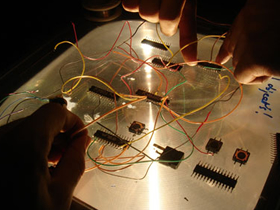 Loud Objects are a noise music group who stretches the concepts of simplicity and minimalism to their extreme limits. Transparency is the password of the trio, who, starting literally from a tabula rasa on a slide projector, assembles and welds chips and wires live, in an evocative audiovisual crescendo.

A “simple” performance in its assumption, yet extremely refined and scenic in its actual set up: as if they were kind of surgeons, the three look confident with the projector and in front of the audience develop the circuit, which “blossom” step by step as far as the sound is concerned too.

Like they are on stage, during the interview Katie, Kunal e Tristan never give up using dialectics, they pass their aswers from one to another and talk between them about their lightness aesthetic. What follows is the result of our meeting in New York .

Monica Ponzini: How did you start? How did your common project begin?

Katie: We all went to college together at Columbia , and we were all doing lots of electronic music, and we decided it would be fun

Tristan: We learned about electronic music, kinetic art and music interfaces that use microchips; Kunal and Katie were into noise music and we thought that it would be fun to do something with the chips as instruments. I don’t remember exactly how it started

Kunal: I think it started when Tristan discovered one bit-music generation, and then we started playing with algorithms into chips and opening them and use pins to see what it sounded like.

Katie: We were also interested in doing a noise show that would be a little different from most noise shows. At a certain point we wanted to do a very very short noise piece, and then it sort of developed into a noise piece that exposes how it works. We were trying to get toward a more “transparent” performance, a theatrical but transparent performance

Kunal: Everything kind of happened impromptu for me and Katie, something like “hey, I have this idea, let’s try it out”, we would show up for the shows and we would start doing everything super-transparent, just as if we were playing a theater performance, and the transparency became part of the performance, something that would be cool to look at.

Monica Ponzini: What is interesting in your performance is its minimalism. Is there an idea behind?

Tristan: Yeah, there’s a really strong concept. I’m into minimalistic art, my work is very riductionalist, deals with simple things. It kind of became a way of life So much of live electronic performances is somebody at a laptop and you don’t know exactly what’s going on. I had this conversation with a lot of people way before we started this [The Loud Objects]. It’s something we try to work against, we try to make things transparent, very clear. I think that our music fits in the noise rock context, in that scene, with band like Lightning Bolt their stuff is so physical, you see everything, and it’s very “live”, is very “there”, in front of you

Katie: And it creates a sort of all-enveloping environment, it has its own character in a lot of different senses, not just acoustic .

Kunal: From a video point of view, transparency is an aesthetic. It wasn’t about exposing what was going on, but it was about feeling your were being exposed to what was going on, which means that we provide easily focusable bits of what’s going on: there are chips and wires, you don’t have to really know how the algorithms work, but you still get these chunks of understanding.

Tristan: I think that’s what transparency is about. You can’t expose every single level of a chain..

Kunal: But that’s what transparency is about, expose every single level of a chain

Tristan: There’s like an information problem, in the context of a performance, we can only show some levels

Kunal: That’s why the visual to me are what they are, a projection in black and white of a shadow of what’s going on

Trisitan: But at the same time, because of how we do our show, it encourages people to come up to us and ask us what the chips actually do.

Monica Ponzini: How do you perform actually?

Tristan: What comes out is that we use these chips and they require power, so we connect power and ground lines to them, and they produce audio, so we connect an output to each one. That very simple kind of module is what makes our performance. The chip needs power and has an output and they also have inputs, so we can also connect and modulate their sound if we want. To perform, all we got to do is take this blank piece of Plexiglas, and we start gluing down chips from scratch, then we glue down an audio jack and a power jack and that’s all we need as far as components. First five or something minutes are usually in silence as we hook up this initial chip, and then, as soon as the circuit is completed, we got this explosion of sound, and then the rest of it is wiring these chips.

Kunal: And we found the way to chunk up all these parts until we obtain something understandable visually, which is really cool.

Monica Ponzini: Your project is extremely peculiar. At the latest Bent Festival, where you presented performance, have you seen how other circuit benders work?

Tristan, Kunal: We just recently found out how much it happens in the rest of the world, in Japan , Germany  our only contact for circuit bending was Mike Rosenthal of The Tank. We were surprised enough to find it in LA and Minneapolis , and then we saw people from Japan and Germany .

Monica Ponzini: Are you planning of developing or changing your performances?

Tristan: They change all the time

Kunal: We performed with three projectors, it was pretty tough next time we should bring ten performers (laughs) we always try to do impromptu shows, they always take their own formit’s something we have fun with every time

Tristan: And we have these toys, we make these 1 inch by 1 inch circuits, that are each for a single chip from our show, so people can buy these and jack in their headphones and play them kind of like we play our chips.