In her Ahata Anahata, Manifest Unmanifest IX for MELA Foundation in New York, Jung Hee Choi has presented series of environmental compositions with video, evolving light-point patterns, drawings, incense, performance and sound involving the concept of “Manifest, Unmanifest.” Her synthesis of expression in this series collectively creates an intersubjective space as a unified continuum and emphasizes the totality of sense perceptions as a single unit to create a state of immersion.

“The New York Times” wrote about Choi’s multimedia installation: “If you give in to it while watching Ms. Choi’s hallucinatory screen, you may find yourself in an altered state of consciousness, on the verge of some ineffable, transcendental revelation”. As part of the exhibition, three live performances of Tonecycle for Blues Base 30 Hz, 2:3:7 Ensemble Version with 4:3 and 7:6 will be performed by The Sundara All-Star Band. 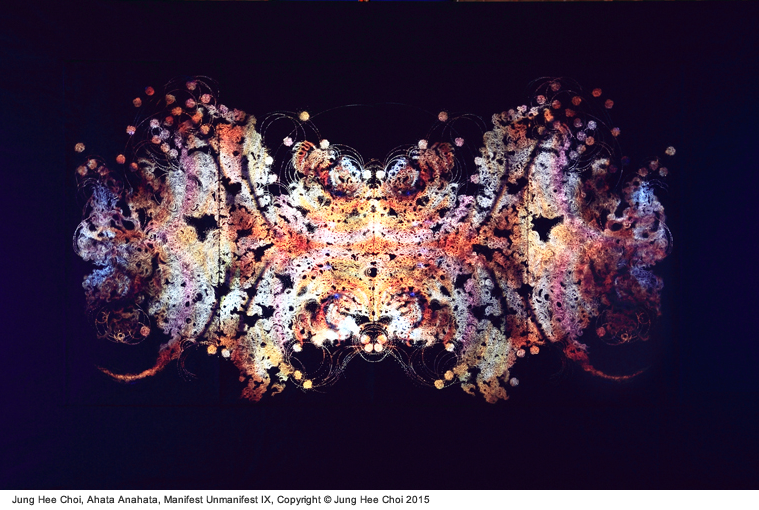 While traversing the common ground of improvisational phrases rooted in Indian raga, American blues techniques, Korean traditional folk ballads and musical Minimalism, this work creates a highly original sound that is based on just intervals.

Curators of the exhibition, Young and Zazeela wrote regarding Choi’s Light Point Drawings: “With the application of her drawing techniques to a new, self-invented medium, that of inscribing with pinholes on black wrap, and with the utilization of video-projected colored light not on the drawing but, as it were, through the drawing, Jung Hee has created a profoundly engrossing body of work in these installations. Although these works can be described and even photographed, they must ultimately be experienced by the viewer in order to fully incorporate the element of time, which has now become an even more central and intrinsic aspect of these works. The varying colored light from pre-recorded videos projected through her needle point patterns continually delineates an ever-changing array, displaying facets of the curvilinear cosmos she has portrayed with endless imagination.” 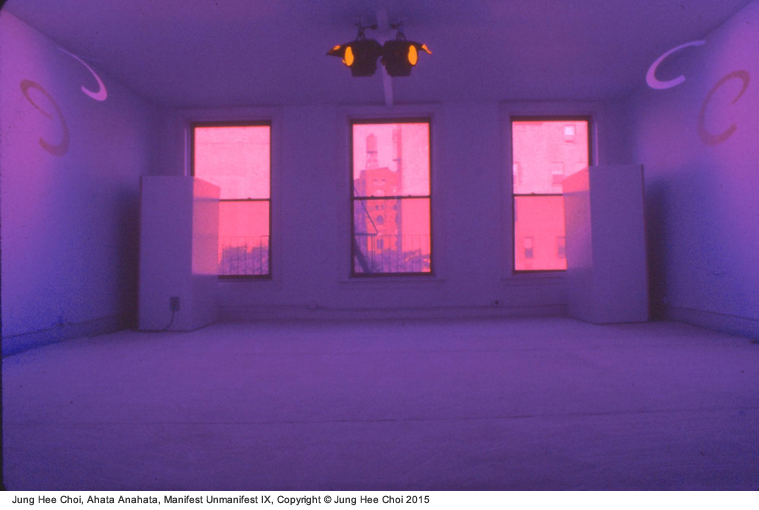 Choi is a disciple of La Monte Young and Marian Zazeela in the classical Kirana vocal tradition and founded with them The Just Alap Raga Ensemble in 2002. She has performed as vocalist in every concert, including those at the MELA Dream House, the five-concert Pandit Pran Nath Memorial Tribute Tour in Berlin, Karlsruhe and Polling, Germany in 2012, the Yoko Ono Courage Award ceremony, the Guggenheim Third Mind Live concert series and the Merce Cunningham Memorial celebration in 2009. Since 2008 Choi has been teaching Raga as instructor at the Kirana Center for Indian Classical Music.