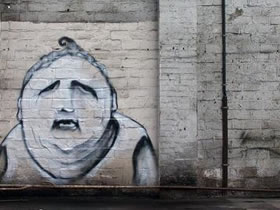 99rooms is an interesting web-based project that mix real ambient and virtual ambient. It is realized painting worrying figures in an old abandoned factory, then animating them so that they interact through 99rooms.

The collective that created this little dream post-industrial slivers is called Rostlaub and it is composed by Kim Köster (The Artist), Richard Schumann (Art Direction), Johannes Bünemann (Sounddesign) and Stephan Schulz (Flash / Programming).

There are several reasons why I decided to meet Rostlaub. First of all 99rooms is the first example of re-elaboration of the post-industrial aesthetic, nowadays chewed and digested after 15 years of metropolitan spaces and not, re-adapted in all the sauces. Then I think the kinaesthesia of their project is structured and articulated with a common attention. Eventually, their works is really amazing. And for once, you can see the show from your own home. I tell you: dark, headphones on and volume loud!.

Bertram Niessen: First off I’d like to know something more about the concept of 99rooms and how the project developed.

Johannes Buenemann: Actually I came a bit later to the project. First of all I showed Kim the location which I found one day when I was filming some stuff in Berlin . Kim immediately started painting and taking pictures. It took him
quite a while to make a hundred and more of them. Then, after Kim and Richard decided to put the pictures on the web they came to the idea to animate them in flash. Because we are close friends it was obvious that this “thing” needed sound as well. So, after they had been working on some animations, the design, ediing the pictures etc. I started to record the athmosphere of the place where the pictures are with my md-player. I also recorded all the sounds I used like stones, metal, glass, doors and got inspired by the mood of this place. With that Inspiration and of course with the Inspiration of Kims pictures I worked out some deep athmosperic backgrounds, where I used Synthesizers and lots of reverb, to make a special mood for every room. There is also running a four – minute background athmosphere the whole time, with a deep disturbing bass and sounds coming out of every corner. This background, sometimes louder sometimes more quite, is for the visitors feeling of being or trapped in one big old factory building. My intention for the sounds of the 99 rooms was to make it very frightening on the one hand, but also ironic and funny. I sometimes just kept the first feeling I had on the room and made a sound for it. So, it became kind of a journey through every kind of emotion.

Kim Koester: yes, the whole project grew, just part by part, there where no concept from the beginning.

Bertram Niessen: Let’s talk about the kinaesthesia. I usually interview artists related with audio-visual performances, but your work is not so far from the research I’m interested in. How did you developed the interaction sound/image?

Kim Koester: As Johannes has already said, first there were the picture then came the animation and then he added the sound. Finally we had a look on it altogether. To fix some noises which had not the right tone.

Bertram Niessen: So a participated project. What does team working means to you?

Richard Schumann: In the best case, It means that everyone can use his special skills.

Kim Koester: For me it was really a new feeling, that my pictures, my work, motivated three other friends, to work on it.

Bertram Niessen: What kind of set do you imagine for your work? Did you think about it only for a solitary fruition at home, or even for museums and other spaces?

Kim Koester: It is done for the web. I like the idea, of free, independent art. But i have shown 99rooms also on a beamer to an huge crowd, and the people were fascinated, but i believe in a really different way than a person who
is sitting by night at home alone in front of his screen making his journey. The focus was more on the pictures and the sound.

Bertram Niessen: Exactly what I thought when I firstly saw your work. Hope to see it soon this way!.