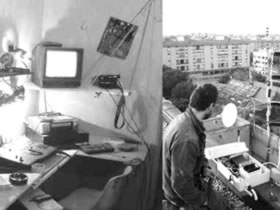 Once upon a time, there was a household appliance called television, a magic box allowing normal people to watch and perceive images and distance sounds, once allowed only to some magicians, medium, telepaths and visionaries. (Magic faculties of democratization operated by technology, unfortunately, don’t always strengthen cleverness).

Conceived as radio’s conceptual evolution and developed meanwhile in different countries with military purposes too, television was made available to the public just after the Second World War, and has become soon an influent political and commercial mean. Recently, we have assisted to a progressive renewal and to a territory redefinition of the diffusion and distribution of the audio visual product, before through satellites and cable TV, then through the web.

In Italy , we have dreamed of a new television. We have imagined it reticular, local, distributed and auto-produced. While we started to notice that something was changing, the panorama had already changed. Marshall McLuhan in 1964 said: “TV is not an action mean, but, rather, a reaction’s”. He defines it as an extension of the sense of touch, a massive exchange in each sense [by “Understanding Media”]. Television has been considered an interactive mean (of massive communication). This thanks to the legendary remote control, which allows you to switch on, off and change channel. A sort of communication /reception, as the exchange is unilateral. Interaction is in fact fake, simulated, as the instrument; unidirectional, doesn’t allow a real intervention.

Independent televisions and hackers’ experimentation have created a local and communitarian model, presenting an interaction form connected to the user’s or group’s participation, which re-draws the producer and shares its experience with other local realities, believing in a practise we could define audio- visual dialectic speech and which has created a database of auto-produced materials for the ether and the web.

The Venice Project is instead the new web TV’s codename, which, on the 16th of January 2007 revealed its commercial identity: Joost , aspirant synonym of television. The project, conceived by Niklas Zennstrom and Janus Friis , tenacious entrepreneurs and inventors of Kazaa and Skype , is an on demand web TV system with a database of thematic channels, some of which commercial, as MTV, others created by users with specific program combinations and comments. Each channel can draw on the set of proposals Joost and commercial TV will made available on the web. A fundamental difference between this and other systems with video contents (as YouTube) is that the user can’t add video contents, but just metadata. They have in common the aim of using the fractal proliferation of the community form. Metadata is the piece of information describing a series of data, facilitating their localization, research and contextualization. Metadata contains descriptions, issues (tagging and key worlds), and in Joost case, even comments, critics and appreciation by other users.

Joost is a system partially Open Source, based on Mozilla and Geeko‘s framework: it uses a Peer to Peer library (non open) and the graphics SVG – Scalable Vector Graphics , which works within XML (EXstensible Markup Language, marking language which, instead of showing information, as HTML does, was conceived to describe it). Joost bases on different servers all around the world. The emphasis is focused on the management of metadata and not on calculators’ power.

Currently, it is possible to use the program as beta laser. It runs on Windows and Mac Intel (Linux is in process, Mac PCC won’t be supported). The content is running out. The interface is young and athletic, the logo ambiguous and disturbing. Putting the mouse on the screen, it is possible to make appear two icons, one on the left, and the other on the right, respectively “My channels”, and “My Joost”, with users’ preferences. Activating these, other windows slightly transparent appear: a system of stratifications and levels in which the user can select, vote programs, chat with other users, look at the hour and receive info. Moreover, soon it will be possible to implement the plugging; the company is in fact smoothing the way to create a community of users /developers able to spread freely the program.

Joost is under a certain point of view, the first international project based on the semantic web. The semantic web is a quite nomothetic concept, whose applications are running out. Conceived by Tim Berners-Lee, inventor of www, it designates an environment in which it is possible to publish not only documents, but information and data concerning the documents itself (metadata) in a format suitable for interrogation, interpretation, and, in general, automatic elaboration. The semantic web is the idea of a web within which creating, researching, consulting, performing reasoning, based on individual and personal choices of an individual or a community. Information auto-describes itself and contextualises in a complete subjective way, following networks of community trust connected to interests or common goals.

Joost’s innovative choice imagines the creation and the development of a new system for managing information, never tested before, the overcoming of relational database towards non relational database, investing on metadata more then on data. The added information and spectators’ opinions become part of the content of the video itself. Joost is a system addressed to create interest groups in which it’s not objects that change, but the prospective on these.

The division, thematic and in groups, implies the vision within each channel, of a show, a prospective on the world unambiguous and with little discrepancies, modern tolerance which means separation from differences.