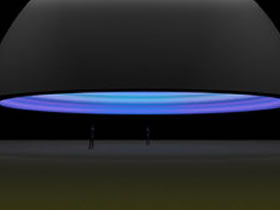 The show managed by Richard Castelli called Sensi Sotto Sopra have been present at the Palladium in Rome since last 20 th October and included in the 2006 program of the Romaeuropa Festival.

Through interactive and immersive works, Richard offered an experimentation of perceptive modalities with whom everyone rapports to art, movies and communications means, but also underline the distortion of the relationship work-spectator triggered by the use of digital, classic theme of the mix art-technology. Interesting characteristic of the show is the matching of sensorial works with conceptual works, that provoke perceptive short-circuits, moments of reflection on sensorial standard dynamics.

Hemisphere is part of the first group, installation of Ulf Langheinrich , composed by a dome of ten metres in the Palladium stalls, where you can swim in a bath of audiovisual granules in constant becoming, slow catharsis that remove the body and expand ear and vision. Helikopter , immersive and ludic, by Holger Förterer , installation composed by projections on the ground that interact with the movements of the spectators, creating the illusion of a promenade on ” pixelled ” water. Same type of visual-motor interaction in the work Du Zhenjun , where the spectator is invited to walk a carpet of bodies that cancels the traces of its passage. The work reminds the works of the Italian group Studio Azzurro , present at Sensi Sotto Sopra with an extract from Il Soffio sull’angelo : presented as an hemispheric installation at the centre of the superior hall of the Palladium, it has suffered this type of staging that castrated the lightness and interactivity of the original work, made of fluctuant bodies on a dome suspended on the public.

The work The scream by Gregory Barsamian is based on a conceptual experimentation more than sensitive to the phenomenon of the retinal persistence. The artist realized a sequence of chalk sculptures that, thanks to a mechanic system, create the illusion of the movement ahead the eyes, a shocking metamorphosis of a real object, a confusion between what we see and what we believe we’re seeing. A crack in our perceptive habits is the installation TV Predator by Sébastien Nöel@troïka as well, device in ambush inside the reproduction of a classic domestic space: a couch, some paints and a television, suddenly disturbed by the invisible predator. We interviewed the manager of the exhibition, Richard Castelli.

Claudia D’Alonzo: Which is the idea you started from in the programming of Sensi Sotto Sopra ? Which type of interpretation did you give to the digital art?

Richard Castelli : When Monique Veautre and Fabrizio Grifasi proposed to realize the first exhibition of RomaEuropa , they wanted to create it in a place particularly related to the festival: the Palladium. This theatre has many particularities: it’s intimate, the stalls is circular and it has a classic frontal. I thought it was appropriate to eliminate the sits from the hall to brake that frontal character of the representation and develop this breaking through the works that twist the typical relation between spectator and opera, that brake therefore the scene invading it. Sensi Sotto Sopra is the result of a meeting between architecture and an idea that take the maximum advantage of this architecture.

Claudia D’Alonzo: How did you choose the artists?

Richard Castelli: Their participation derive from what I said before. The giant dome of Ulf Langheinrich suits perfectly the coffer of the hall and offer to the public a new visual dimension occupied by the whirl or, from the other side, the dome is contemporary a great sculpture where the angels of Studio Azzurro play. On the stalls, three works of Du Zhenjun , Holger Förterer and Marie Maquaire that seem control the public. Some allusion to the pre-cinema by Gregory Barsamian and Christian Partos , an époque where the square didn’t conditioned the moving image yet. Then four televisions by Pierrick Sorin , an homage to the phantom theatre blossomed in the 19 th Century. Another homage , by David Moises , to the genius of an inventor of the 60’s who invented the first television in relief. The interface more interactive and immersive in the world, the one of Time’s Up . A manipulator of the panorama and the time proposed by Romy Achitur . An integral strip-tease without material evidence, work of Christian Partos . And obviously the most aggressive installation: the TV Predator by Sébastien Noël@troika , who attacks the most invading painting of our époque, the television.

At the same time, the works must not be reduced to simple illustration of a complete concept. This works are powerful and self-sufficient even outside of the concept of the show. If a work represents faithfully a concept, but is weak alone, I certainly do not take it.

Claudia D’Alonzo: Talking about the exposed works, they denote a sensorial implication provoked by another technological coefficient, as in Hemisphere . Others seem use mechanical instrumentation, as The Step motion animation or Scream . These two different types of works involve different types of involvement of the spectator?

Richard Castelli: The technologic coefficient doesn’t reveal a direction in the modality of participation. This is an independent factor: two works with a huge technical difference can involve the public in the same way, as far as two work with the same technique can absorb the spectator in an absolutely different manner.

Claudia D’Alonzo: Could you talk about your personal experience as manager? How did you start your occupation in the world of new media art?

Richard Castelli: I was destined to a career of biologist, but the idea that the horizon of that profession was limited socially to a researcher of the State or a member of a society that makes genetic business took hold on me. The two options lack of glamour and spirit of adventure, and that tops it all for a subject that is going to change the human being and its society. As I was interested in electro-acoustic music since the age of twelve, I found more interesting way. I then became a producer of experimental music, programmer and producer of spectacles, installations and films, more and more centred on the new media. At the end, I became organizer of expo characterized by the use of new technologies, but not only.

Claudia D’Alonzo: Do you think that the use of new technologies in art is changing the role and work of the organizer?

Richard Castelli: It is clear that a technical preparation and an open mind are advisable as a good general preparation must be supported by the skill of synthesis and the constant ability to anticipate the results of both the artistic and scenic side. A better knowledge of the technology allows not to be mystified by charlatans. At the same time, you must fascinate the public with the chosen works but also with their technologies.

Claudia D’Alonzo: Since the middle 90’s, the interactive installations have been characterized by the use of more and more sophisticated but also discreet technologies. Do you think these tendency is now consolidated in a secure way or do you think there are other tendencies in the interactive world?

Richard Castelli: The microscopic electronics and the acceleration of the elaboration speed allow the technologies to by more discrete, when necessary. It’s better, but when this force the artist to be discreet, well this would be a regression. I think that most of all that the interest for the visible machine turned into interest for invisible machines, and this strengthen pseudo philosophic discourses.