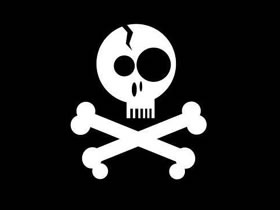 A series of initials are menacing our future. They would seem sounds without sense but they are “laws and directives” by the debatable content ( dmca, eucd, dra… ). They regulate the behaviours in the use of the information through the electronic means, they harmonize some aspects of the author right in the media society, they protect and guarantee us in the digital era. But they restrict and impose controls, they limit the sharing and obstruct the growing of the culture. It would be difficult believe it’s for the goodness of everyone and the don’t surely believe this, that in Sweden mobilized to create the PiratPartiet .

When laws should defend and protect us, but in reality harm and menace us, we shouldn’t amaze if pirates wrestle for our fundamental freedom, more than our government. But who really are the pirates?

Here in Italy , the distinction between pirate and criminal is thin and imperceptible, maybe inexistent. There’s who fight to make the difference between haker and criminal clear and who opposes itself to the equation haker=computer pirate. In Sweden, next 17th September , the hakers will present with the Greens at the election of the Swedish parliament ( riksdag ). Anything but criminals or trickster. Ex-employee of computer factories, little programmers and young students grown up with the technology. They have a manifesto and even a program: reduce the copyright, abolish the licenses, strenghten the right to the privacy. Quite much for a ” single issue party “, that means a party that deals only with some questions and defend and protect only some rights.

The PiratPartiet was born on January the 1 st 2006 on the Net, of whom interprets the ideals and defends and supports the fights. Between its aims, dear to the internet population: liberalization, the filesharing, knock down the drm, promote the free software open source in the public sector . To the Net, the Party owe the most of its success obtained up to now. On the Net it collected in a few hours all the necessary signs to present the candidacies (officially hand in the 10 th September). Thanks to the Net, the news of the born of an haker party arrived everywhere and formed a real “global movement”. So new hakers party born in France, U.S., Belgium, Austria, Germany, Spain, Russia. New ones are going to born. There’s even one in Italy . The Swedish one though affect the politic in a more concrete way.

To promote the culture diffusion, the pirates say, it is necessary a law that doesn’t totally abolish the copyright so that it doesn’t remove the financial interest of the creator, but a law that create equity between the financial interest and the society interest. In order to make this equity real, the copyright should concern only the profit-making businesses (so no copyright on no profit filesharing) and it shouldn’t involve what is different from the exact copy. Moreover, it should protect the works for a sufficient time in order to cover every kind of investment. “If you look at the industry, as Rickard Falkvinge , founder of the PiratPartiet , clarifies, every investment is amortized in five years. We think this is a reasonable term”.

To protect the copyright, each private conversation should be controlled, as each conversation contain a copyright violation. As the privacy right, in a democratic society, must be sacred and untouchable, it’s up to the copyright step back. But it does not happen.

Besides the recent Data Retention Act was born in order to control. “This act oblige telephone companies and Internet Providers to record and preserve information about every single phone call, every sent or received mail, every visited website and even the position in every moment of every mobile All this mortifies the freedom of expression, reduces the right to the free association and violates the 12 th article of the UN declaration of human rights”. The PiratPartiet will fight in order to abolish the act, but if the laws won’t change and the right to the privacy will be really respected, Falkvinge states, “we have the moral obligation to protect the citizens from the effects of the systematic surveillance”.

For the moment they have a solution: Darknet . It is an Internet commercial service, offered by Relakks , launched the last 14 th August, 5 euros per month, with whom you can send and receive files absolutely anonymously. Part of the incomings will finance the battle against the copyright.

The born and affirmation of the party in Sweden is not a case. Here the legislation in favour of the owner of the copyright, as in many European country, is turning more and more rigid. “We want to underline- the manifesto recite- the horrifying decision dated 1 st July 2005 with whom our government decided to criminalize millions of citizens. The copyright road is going the opposite side of the public opinion”. Furthermore Sweden is the homeland of the p2p, of the PiratByrån and the Pirate Bay.

The PiratByrån or Pirate Bureau is a centre of anti-copyright research, supporter of the free culture, taken into account by both media and Sweden population. It produced several documents on the on line sharing and organized protests and manifestations in favour of the free circulation of the knowledge and the right for the copy. Lots of its members are now part of the PiratPartiet.

Instead the Pirate Bay is a connection with the p2p world of Bit Torrent , a rich archive of music, films, software, games, linux distributions freely downloadable. It has been largely talked since last 31 st May when the servers have been sequestered and the website obscured. The Take Down , wanted and instigated by the MPAA , has unleashed strong reactions not only in the world of the p2p, hakers and students, but also between the common people, that doesn’t like being oppressed by the U.S. and considered the repressive operation “a waste of public money”.

The Swedish are conscious of the critical condition of certain laws and directives, care about their freedoms and don’t want to risk some fundamental rights. This determination and special sensitivity, both political and social, that make simple trust in the future of the PiratPartiet.

The last test to pass is the fence of the 4%. It’s only 225.000 votes and in the “paradise of the international piratery”, as with contempt John G. Malcolm defined Sweden, the pirates could overcome the riksdag threshold. Or at least this is what we hope!.