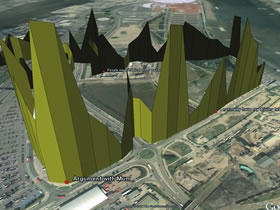 “Technology appears to be a heady and unstable mix of authoritarian control and anarchic mischief. My take is to slip into the gap between these two poles(…) ” – Christian Nold

Biomapping is put into the pocket before leaving the house, as a very mp3. This time you’re though invited to leave your headphones and to abandon your lonely soundtrack to look and to live everything around you in a different way. Artist, academic, activist, Christian Nold is one of those characters that moves on the line between Art and Science. And he does this in a very critical way.

His Biomapping research project has moved around the most important new media art festival since a couple of years ago, last of all the Barcelona Sonar, inside the exhibition ALWAYS ON, dedicated to the mobile technology and culture. But his work is different from the other artistic projects that seem to parade the use of the new technologies, loosing sight of the real contents of the project.

This 30-years-old English man proposes a simple, poetic and clever idea, whom realization goes further than the narrow expositive spaces. More than the tactile media philosophy, Biomapping goes through the domains of the biometrical science , of the mobile technology and the cartography , to change course and visualize the emotions.

The confluence between wireless and mobile technologies made our body, the space and the perception of it traceable, perceptible, able to be filed, changing radically our traditional experience in the world. The surveillance and control technology, which multiplied in occident during last years, doesn’t have to be only with the public security, but a bigger monitoring system of our life as consumers.

We produce information, without being able to access to them and without realizing that. As data flow we move and live on pre-set paths created by the information society, as real actors we take our daily choices between guided routes and pre-existent options, as diligent users we scroll the menu of the public interface, of the urban ground and of the world wide web, living a sophisticated computer architecture that has no walls, but that makes our minds and bodies react every day.

What happens when the desire of wireless ubiquity goes further than the consumeristic one proposed by the sparkle and pressing high-tech window? What if we get involved into biotechnologies and we decide to change the point of view of our maps? What happens if we decide to look over the backdoor of our connections and re-define the space of our daily physical and emotional experiences?

Christian Nold thinks that the technology is not neutral and unidirectional as we’re thought. It is just a question of re-configuring the power. And the power we’re talking is the individual one, corporeal, physical, the one that imperceptibly irrigates our lives. As a child that breaks its toy to see what’s inside, Nold turns the traditional spatial-socio-economical coordinates upside-down, reverses the sight of control technologies and projects Biomapping .

And he does this in the free creativity granted by the meeting of art, design and scientific research. He combines the GPS mobile technology with the biometrical GSR (galvanic skin response) , destined to find the stress level of our body. The dimension of an i-Pod, equipped with a webcam combined with a surveyor of pressure to wear on the elbow, Biomapping is nothing but a portable receiver connected on three satellites that records our emotional state in determined geographical coordinates.

From anonymous presence on the surveillance system closed circuit screens, our physicalness turns into conscious corporeity that generates data, or better contents, and creates interesting questions on the definition and production of what we call space.

Biomapping increase our perception and make visible to the society, but ourselves in the first place, the emotional states that determined spaces and situations provokes on us. The result is in fact tangible in the visualization of real personal cartographies that, shared with other users, enrich the mapping of the territory around us and open the sight to an unexpected and new way to look at it. The invisible interaction of the anonymous mass breaks the lonely simultaneous proceeding, and emerges in coloured paths, re-interpreting the digital passage where space and technology become, this time, canvas and brushes.

What’s that really surround us? Rigid and static geographical coordinates or a social dynamic space? How this last can be reached? The phenomenon of the Emotional Mapping has lot to give to the tactile media tradition. With a smile, I can think about futuristic wanderers that interact with the surrounding urban space.

It is surely a new approach to the cartography that, in clear contrast with the institutional one, challenge the iconography imposed by the power, and leave the sight to alternative ways of participation from the people. Matter of power of vision, but not only.

The author of Mobile Vulgus doesn’t stop here, and consider this as a starting point better. Tactile is not the instrument itself, though the entire research project, a project that he defines of strategy. A subtle strategy, in the long term, that hasn’t an immediate political revolution, but the production of a critical and active thought on biometrical technologies. We talked about that directly with Christian Nold.

Sara Tirelli: How does the idea of this project was born? Does your challenge develop from political reason or better focus on an innovation in the area of the portable wireless technology design?

Christian Nold: My Biomapping pj has two strengths: from one hand is about responsible Biometric technology, wich are being kind of use and abuse a lot nowadays […] at the moment like the retina scanning or dna datas are starting to be included in various id code(UK), so I want to find the ways in inverting those biometric technologies and trying to find a way to make them usefull for individuals, and generate another kind of discourse around those technologies[…] In someways it’s in a combination between desing challenges and political engagment, i don’t see this 2 things as something disconnected: the social and the political aspect are always in object.

Sara Tirelli: Have you ever thought about biomapping as instrument of democratic participation to people to make conscious social and political choices?

Christian Nold: I think for me the idea how i want to use the tool biomapping, if i want to use biomapping or not as tool for changing the enviroment is a difficult question. It’s about interpretation and giving people a different way to create their own view of the world. Creating maps is much more than creating maps in itself, is more about create a tool that allows to kind of see our enviroment in a different way. My project is also not quite a tool, is more a complicate overrelations with tools. It’s not the tool that is going to change radically anything at a political level, but i think it opens up a discourse that is kind of stuck in some old metaphor and asks some difficoult question about how our enviroment is exactly, are we surronded by physical wall ?or are we surronded by a social space and how do we get to this social space and what creates the social space, is it really an individual thing or something to be share with by other people?

I like the idea we can keep our datas, it’s very tangible in our hand and we can decide when to upload it and if we want to give it to somebody else. From one hand biometric datas means smt to me but i think it become interesting when we also start to share it and start to commonly look at our usefull space and how we can represent this idea of production of space is really a crucial thing to me. I’m trying to create a different concept that empower individuals.

Sara Tirelli: Biomapping is a project that exits the strict border of art. Which are your personal experiences in the role of artist who uses the techno-scientific industry instruments?

Christian Nold: I think every artist has to be aware of their own pj and see in a kind of realistic way outside their own desire for their pj the potential use of it in the outside world . The response to my pj has been very curiose: from one hand i had people healt professional very interested in how to monitore the level of stress, and i had marketing people really enthusiastic of this pj who really felt this is a way to see how people feel, definitely seeing why people go in certain place.

I’m not particulary interested in create another marketing tool, I’m kind of excited but also scared from the kind of response i got to my pj. In my case this thing of keeping control of everyone’s datas is very crucial issue and if you can build those mechanism into a technology or into a thinking is much less likely that our dial start to get misuse. Off course we can never totally control it, but artists never tend to generate weapon, never tend to create powerfull scary thing anyway.