The Knowledge Of A Fragile Future 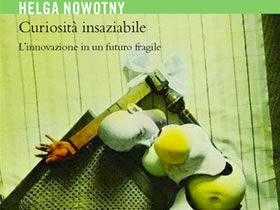 On 27th September Helga Nowotny ( http://www.helga-nowotny.at/ ) took part in the seminar Scienza Tecnologia e Società (Science Technology and Society) organized by the University of Trento . The topics have been mainly those analyzed in her book Insatiable Curiosity. Innovation in a Fragile Future , which has been recently translated into Italian but which was first published in Germany in 2005 with the title Unersättliche Neugier, Innovation in einer fragilen Zukunft . Nowotny iso ne of the most famous living science sociologists: she is both Vice-president and founding member of the European Research Council (ERC) , and she was Chair of the European Research Advisory Board of the European Commission (EURAB) in 2005 and 2006.

The core of Nowotny’s notion is clear: the current age is characterized by a high level of uncertainty which has been caused by the extraordinary height reached by scientific research . This condition leads to an inevitabile paradox: more scientific knowledge means more uncertainty and in security. Moreover, where does the border between the appeal of the new and the fear for the unknown lie socially and institutionally? And between innovation and preservation?

According to Nowotny , one of the reasons why future seems so fragile is the excessive offer of knowledge which, while on the one hand gives multiple solutions to present issues (such as the dismantlement of welfare state, unemployment, diseases which are not considered by pharmaceutical research, etc), on the other faces the impossibility of their accomplishment because of conflicts created by commissions and expertises that fear a huge increase of riskd and threats connected with those solutions.

One of the imperatives in research policies is the “desire to control the unpredictable”. Nevertheless, Nowotny believes that the confidence in controlling the direction of research in order to prevent certain developments is a model which no longer suits the present. As biotechnologies for example demonstrates, scientific results follow their own dynamics: multinationals try to control their potential (for example through financial support control or patents), politics imposes institutional choices which restrict the public discussion on the utility of certain studies because they seem to challenge the moral bases of society; yet knowledge spread throughout the markets and society gaining a new energy which is the result of the circulation of ideas and cognitive exchanges.

Nowotny’s thinking then becomes sharper: the sources of knowledge have to be widened and the key word which rhetorically resounds everywhere is innovation. The author states she is aware of her “obsession with innovation”: the concept is often presented as a substitute for the missing confidence in progress. We all know technical improvements do not necessarily correspond to moral progress.

That is why Nowotny describes alternative proposals to the classic model of the future between utopia and dystopia. (see her Nineteen Eighty-Four: Science between Utopia and Dystopia, 1984). It is not the future we can talk about; there are different futures instead. They are not set chronologically, in a temporal “illusion of geometry”; rather they are part of the present. Those futures need both knowledge and imagination: scientific research need the arts and everyday experiences as much as it needs engineering. Though the spiral of innovation is inevitable, it is necessary to have a social change in the approach towards science.

Society should take part culturally in the processes of innovation and morally in research by making people aware of the uncertainty and the possible failures of science. Institutions should support areas of communication and action of public creativity as well as those actions which can make people come to terms with the frailty of the future: we have to accept that our knowledge is temporary and that a system based on innovation and thus on transformation can bring ambivalences to a society moving towards the “future of the futures”.