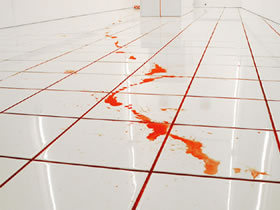 The Italian theatre re-start from Dramaturgy from the Space. I want to start woth this phrase pointing the lights on a project born in 2003 with two young from Friuli that already have years of research on their shoulder: Eva Geatti e Nicola Toffolini.

Her, performer of the new generation, grown up with artistic season near some affirmed groups as the Motus , Teatrino Clandestino, Masque teatro e Teddy Bear Company. She represent the winning card on which bet for a new theatre in search of originality, professionalism and creativity. Eva also have more energy, and that becomes evident when she succeed in touching our souls and involve us during the play. Nicola is an international artist, already finalist at the 6° Prize Cairo Communication , who participated to the major contemporary artistic festival such as Quadrennial of Roma, TECHNE 02 , the 42° Suzzara Prize or at the Opel and the united arts for Europe . Currently, he addressed his attention to the theatre of the research, showing competences in different artistic ambits as far as the design and the art light.

Between the collaboration of Eva and Nicola born Cosmesi , a project the revolutioned the ways of contemporary theatre, placing itself at the summit of the Italian panorama. They play different shows, Bionda I interno 5 present at the festival ENtoPAN at the Foundry of Londra, Prove di condizionamento at the Festival of Santarcangelo dei Teatri 2005 and is also guest “star” at the Festival Giostra in May 2005, at the Bè Bologna summer 2005, at the festival Avostanis 2005.

Last January there’s been an encore of a play half installation and half performance, half play and half tragedy, half sound and half silence, half artificial space and half natural, on the premises of San Giorgio Theatre in Udine: Avvisaglie di un cedimento strutturale . Play winner of the Iceberg Festival 2005 and replied at the Santarcangelo of the theatre Festival always in 2005. We can contemplate and admire this performance in Rome, in occasion of the Ipercorpo Festival created by Paolo Ruffini , the 19 th , 20 th , 21 st and 22 nd of April at the SantaSangre-Kollatino Underground Theatre.

Avvisaglie di un cedimento strutturale is able to love and then destroy things that we always consider as friends. Everyday life, family, visual and introspective experiences. It is able to conceive unstable processes, to manage relationships between body and space without the logos. It is the innovative aesthetic that marks Eva’s action, the red and white have a strong visual and sensory impact, as the coffin, the phone, the umbrella, the cake or the cups have a strong intrinsic meaning, or just conceptual.

The overcoming of the horizontal relationship stalls-scene in favour of a vertical prospective is not a random choice, as obviously the architecture friend/prison, as the cold and aseptic neon, as the podium/cube in the centre of the scene. Living this space means being part of it, share good points and bad points, converse with details and with yourself. We’re in front of a new experience of the space proposed to the public and lived at the same time by the protagonist, who first reflect and then becomes victim, and lets emerge solitude and melancholy of the nowadays society.

If the draw at the interaction with your own space is frequent, it is though an empty and make up privacy, disturbing I rather say, where more than reassure, it remind questions and problems that we never imagined. It is an artistic ambient more than a set. The perception that we knew at the beginning is now against us, crushing on us during the final. We go through the cohabitation with to the cohabitation not to. No interface, no special effect, no multimedia. After all, art must make us forget about technology to build up aesthetic and ethic.

“We now have our own space, immaculate and long. People and objects become simple presence inside it, equal to each others and linked one to another. Objects inside this sterile perimeter show to define and characterize a symbolic ambient. The visitor, an inhabitant of situations, composes geometries and build clashes in the space, transforming it. The space is anyway clear, without obscurities, a place of simple certainties that the inhabitant manage with confidence and in absolute solitude. The routine articulates time in a protect and sure existence, composed of precise movements inside a perfectly known space. Standard situation .

A pleasant and apparent quiet mood. In the dark moment where all of this collapse, the way of being modify radically and the need of help drive to speak. All is huge and complex. Everything that was familiar it is now monstrous. There is no way to keep contact with all that remain. From this moment the objects are no more poetic association of thoughts, but rather complex joints and bad companions”.

The beauty of this aseptic installation is inside the discovery that the dramaturgy transfigures through the gestures, the choreographic movements, the strong symbolisms and through the sound and visual aspects. It is a theatre-image where the minimalist aspect is underlined and the fluid rhythm helps the attention of the user.

The marvellous Eva plays with “our” solitude putting up characters of the imaginary, covering with nonexistent rain, wearing the happy apprehension of a first love, operating a flying object above the public by remote control, touching a tree through an artificial hole or easily introducing, with unhealthy precision, everyday objects that become more and more extraneous. So here the anxiety of consumerism has the upper hand or, more easily, the anxiety of the contemporary solitude. So let’s start again from Cosmesi , finally, for a new theatre research.