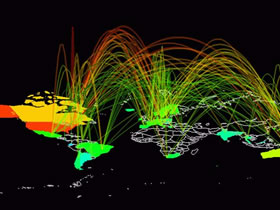 Nowadays a diffused sense of guilt is perceptible when pronouncing the word global, one of the most misused and poly-semantic terms used over the last twenty years, and equally a sense of compensation is felt when proposing, in substitution of it, the concept of glocal , that is the declension of global cultural, economical, political and technological dimensions with regional ones.

As of the nineties in technological environments, a praxis was consolidated that soon became a policy innovation that goes under the name of regional innovation system . Perhaps it is that that can genuinely come into the category of glocal with procedures which are certainly ante-litteram in comparison to theory formulation.

The approach is certainly not unambiguous, but the common features of this type of policy innovation are set in an institutional context that, through public intervention and the relationship with enterprises and citizens, knows how to favour the technical requirements of the territory understood as “region”.

For Edquist, Fagerberb, Mowery and Nelson (in the Handbook of innovation , 2004), the innovation system” is stimulated by the internal and external factors of society, as a mutual social process of evolution and structuring, between social changes on one side and businesses on the other. (e.g. the greater complexity of the social composition an equally structural complexity of the company must exsist)

According to Joseph Schumpeter “innovation is at the root of the evolution of the economic system and its main engine for change and creative destruction “. the “regional” declension of this process highlights how innovation is an essentially geographical process: a necessarily complimentary approach to the centralisation and to the concentration of the resources and of the productive activity or to their simple dislocation in the territory where the cost of labour is lower.

Moreover such a system takes into account conventions, of the behavioural roles and norms that at their time are generated (and conditioned) by socio-economical factors. The territorial and historical environment of the individuals reacquires therefore their own role in the processes of change, both social and technological. Proximity therefore favours the synergy of the adaptation and acceleration or learning, particularly important processes for new technology (for example schools, universities and training centres are in a privileged position to favour knowledge about the local economical situation, and connections between companies).

A fundamental role is carried out by the institutions understood as “social relations” that structure a system of activity of production, exchange and consumption. With this type of approach, hoc created institutions must be conceptualised to their up most. The objectives that they must follow are: the promotion of new forms of financing for the starting up or the supporting of innovation activity, the interaction and the cooperation between the different regional companies and the development of human skills.

The studies in question follow two main traditions: the first one wants to inquire into the characteristics of each system (social and institutional dynamics at the base of the innovation activities on a regional scale). The second wants to elaborate the key indicators of this type of system: such as the organizational structures, the infrastructural abilities, the competitiveness and the abilities of vis-à-vis relationships (a mapping of the several types of interaction between the various actors and factors). A detailed review of these studies is offered by David Doloreux , professor of the Université du Québec, in his article Regional innovation systems: Current discourse and unresolved issues , published in the magazine Technology in Society (April, 2005).

However, studies of such a nature encounter an objective difficulty: the outlining of the region. What is the “regional scale”? The city and its district, or the province, or a valley? From this point of view, the NUTS (Nomenclatures DES Unites Territoriales Statistiques), regional classification of the European Community remains a point of reference. The tendency is however that of following one definition based on the administrative units of the network and one based on cultural criteria “geo-regional” of the region.

Therefore as it has been illustrated by the Program on Globalization and Regional Innovation System of the Centre for International Studies, the study of regional contexts becomes necessary during globalisation processes (perhaps it would be better to define them as “planetisation” for coherence of terminology) because in an economical context characterized by integration and homogeneous pushing in terms of investment, of commerce, of research and of development, it is fundamental to understand how the technological innovation is generated and extended inside economical, social, political and geographic contexts.