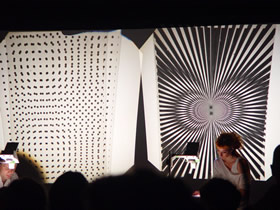 Mikomikona is a Berlin duo composed by Andreas Eber and Birgit Schneider . Their audiovisual performances, aimed at an aesthetic minimalist strictness, are experimental lab sessions in which the duo focuses on the physic changes of sound into image and vice versa.

“Extreme” experimentalism, aliveness and strong stage impact are the main features of their work, planned between deep theoretical awareness and technological research. For their performances they work with overhead projectors provided with self built analogical devices reading and transforming in audio signals the optical layer stratification on glossy papers or strange machinery with the 16 mm. Each performance is the result of a media archaeology path rarely observed in audiovisual electronic experimentation. While we are waiting for them to perform live in Italy , we asked them some questions:

Bertram Niessen: Could you just tell our readers something about your artistic story before and after the creation of Mikomikona? Did you have artistic or technical studies?

Mikomikona: We have a practical and theoretical background. Andreas studied physics and went to Media Art Studies, Birgit studied media theory, art history, media art and philosophy. We both studied at Hochschule fur Gestaltung Karlsruhe . We started working together different times in different fields. For instance, we organised a TV-Test-Image exhibition in Berlin broadcast on a TV station, but we have founded as well a graphic design office/artistic place in Berlin in 1997. Birgit then started working at university in a program of visual studies on technical image in Berlin . Andreas did a lot of Vying and video installations.

Mikomikona project is a link and a mixture of our interests. Birgit devotes to technical image, as code and fragmented image, starting from weaving to printing, to the TV story and IT. When Birgit read something about how interference really shows the technical aspects of media production, we come out with the idea of dealing with old media in a different and performing way. This was how the project Mikomikona born, together with the idea of practising media archaeology which isn’t neither merely scientific nor merely artistic.

Bertram Niessen: Which are your main aesthetic influences? I know that’s often a simplifying question, but in your Fourier-Tanzformation I+II beside the influence of minimalism, I noticed, maybe, even those of Programmed Art. Isn’t it?

Mikomikona: Our main aesthetic influence, from the point of view of art, is minimalism without any doubts, but constructivism too( Lazlo Moholy- Nagy ). We love the first media experiments of Nam June Paik and Vasulka . It’s important for us even the 20’s experimental movies story , such as Oskar Fischinger’s, Raoul Hausmann’s and Walter ruttmann’s as well as the long Otto phonic experiments’ one. We like to consider our performance to be “experiments”. Other influences belong more to philosophy than to media, as Friedrich Kittlero or, partly, Vilém Flusser .

For us, the media aesthetics belonging to those notions of coding and decoding can be “pure” and “rough”, connecting to our preference for black and white as well as for lines and columns and for our tendency to abstraction and the use of found footage.

Bertram Niessen: Why are you so fascinated by analogical?

Mikomikona: The so-called digital era gives us the idea of the existence of an analogical past. We don’t share this prevailing vision of an analogical age followed by a digital one, as if they were two different entities. We are interested above all in strengthening the concept of different types of media mixing up together, which have always had a mixture of both aspects, either analogical or digital, such as TV or video. So we are interested in the simultaneousness of analogical and digital media.

The alphabet, the weaving and notation have in fact always had fairly good forms, a long time before CDs and internet. Computer gave us the opportunity to think about “old” media and “old” technologies in a new way and to ask us new questions about coding and code universality. Some features now considered as typically digital (as multimedia, the possibility of interpreting a digital code as a text, an image or a sound) can be realised even in an analogical environment. This is what we try to prove in our performances. With the help of an analogical circuit, we transform images in sound, this is something media-artists now do with their so-called universal computing machinery and it is sure that it makes sense only in the context of IT and laptop performances. Emphasizing analogical, we try to find out something about digital.

Bertram Niessen: How do you organise your performances? Do you have an outline, a score or is it all free and extemporised?

Mikomikona: We usually have a sort of score, giving an order to the performance as if it were a composition even if during the performance we end up making other effects.