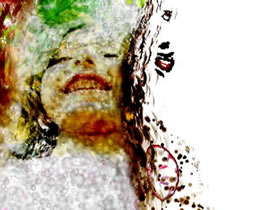 In the video art panorama, an original figure is the Japanese artist Takagi Masakatsu . His works have a peculiar approach and they’re suddenly recognizable. His work is a perfect fusion between images, colours and sounds.

His images are simple, from the everyday life, scenes from the world during travels. And maybe this simplicity is the strength. Often the subjects is children laughing and interacting with the video camera. The images are then processed in a way that they result an explosion of colours and lights, very often strong colours, yellow, pink and “acid” green that send back to a childhood imaginary. Even the musical part is personally composed by the artist, sweet melodies frequently played with the piano and then digitally elaborated. Looking at some works of Takagi Masakatsu such as Bloomy Girls, The Color of Empty Sky, Aura, El Viento, 18 Portraits of Atlas, Lightening , the sensation is harmony, joy. It seems like the world hides huge surprises, if you look at it with child eyes.

Takagi Masakatsu started vijing in Japanese clubs. Now he exposes in museum around the world and his works keep being fresh as It was at the start. He didn’t abandoned the live part, accompanying David Sylvian in his 2004 tour . With his artistic video production for electronic musician, Takagi Masakatsu publishes CD and DVD with his works, produced by disco etiquettes, mixing the artistic side with the commercial one. He lives and works in Kyoto, city by the magic atmosphere. I contacted him via e-mail for an interview about his work.

Isabella Depanis: Do you have a different approach to your work, when it’s live or destined to a museum?

Takagi Masakatsu: Yes, the approach to live performances and video installations in museums are really different for me. For live performance, I care about Music much more than Video, because I don’t manipulate video during the performance, I playing music, like playing the piano for video works. It’s like a old silent movie style. Or simply I play music alone without video images. For video installation in museums, I screen my video works. Of course including music, but I care about details of video images more than sound. I like both approaches, I need both. So sometimes, I really desire more time for working each approach more slowly and more deeply…

Isabella Depanis: As you’re known as visual artist, when I discovered that you have a great music production composed by yourself, and that you publish on CD, I find it a particular choice. Why is that?

Takagi Masakatsu: Actually I learned playing the piano first, when I was 12 years old. And making music from that time. But I didn’t know how I could make my own music at all… Making video came to 19 years old. At that time, I completely forgot about music, I just concentrated on making video only. After I learned how I could make video works, I tried to make music again. That time, it worked out. Because inside of the computer, data of video and sound were really similar, so I could manage to build up the composition as I liked. For me, making music and video is really similar, both treat the time.

Isabella Depanis: How does your creational process work? Do you start from the video or the music?

Takagi Masakatsu: Always video is first. I finish all the scenes and edit them completely without sound. I want to concentrate on what video itself could tell. It’s really similar process of working on painting. After finishing the video, I make the music for it. It’s like adding more colors and movements by using sounds.

Isabella Depanis: When I saw your work, the sensations I had where harmony, child joy and spontaneity. It is a marvellous combination of unusual colours and everyday images. Where do you find the inspiration to create this involving situation?

Takagi Masakatsu: Maybe the inspiration would come from memory of my childhood. I try to remember how I saw, heard or felt when I was a kid. I remember I felt the world more different way, more deeply more largely. I remember, when I was a kid, I knew what kind of things I really wanted to see, hear, feel. So tracing my memory, I can find some new ideas or what I want to create. Now I’m living in the country side of Kyoto city from my childhood, so I have many favorite places inside mountain around my house. So if I go to mountain by walking 5 minutes from my house, sometimes I can find some inspiration there. And also traveling abroad gives me lots of inspiration. I can find same situation and environment of my childhood in another countries. It’s like a treasure searching. Treasure is the key to open my mind and let me make something.